‘Alleged terrorists not terrorists,’ The Wire just altered a PTI story to serve its agenda. PTI MUST ACT

As the nation woke up to the loss of its brave hearts on Sunday, the fake news factory, viz. The Wire took up the role of Inter-Services Public Relations (ISPR)- Pakistan military’s propaganda wing.

Indian Army Colonel Ashutosh Sharma, Major Anuj and Jammu & Kashmir Police Sub-Inspector Shakeel Qazi were among five security personnel who gave the supreme sacrifice in line of action in Handwara while rescuing civilians who were taken hostage by terrorists in a house at the Chanjmullah area of Handwara

Manipulating a Press Trust of India (PTI) report in accordance with its toxic ideology, The Wire put out a headline reading “North Kashmir Gunfight Kills Colonel, Major Among 5 Security Personnel.”

In the story, The Wire has tried to make another Batla House out of Handwara and has validated the jihadists, calling them “alleged” terrorists.

The Wire has an obnoxious agenda of slandering the Indian Army personnel as killers and rapists, and it doesn’t even care if it sounds grossly insensitive on a day when the entire nation is mouring the loss of its brave hearts. 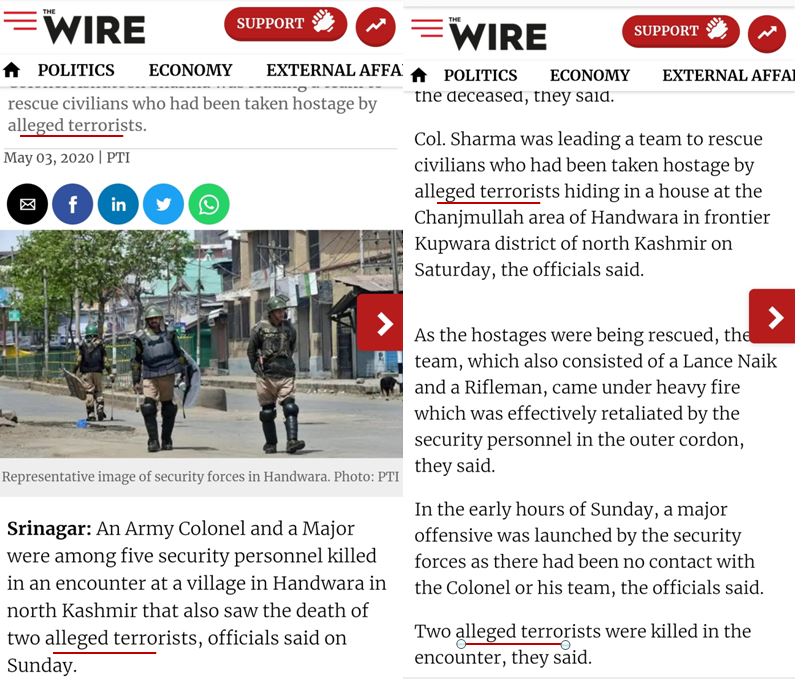 PTI, being a news agency, lets media outlets publish newswire stories originally released by the agency. While the other outlets can edit the headlines while publishing them on their own platforms, the content of the story itself cannot be edited.

But when it comes to nefarious propaganda against the Armed Forces, terror apologist The Wire doesn’t really care about journalistic ethics. Through this report, it has deliberately manipulated the PTI report to call the jihadists “alleged” terrorists, even as though the PTI calls them terrorists. 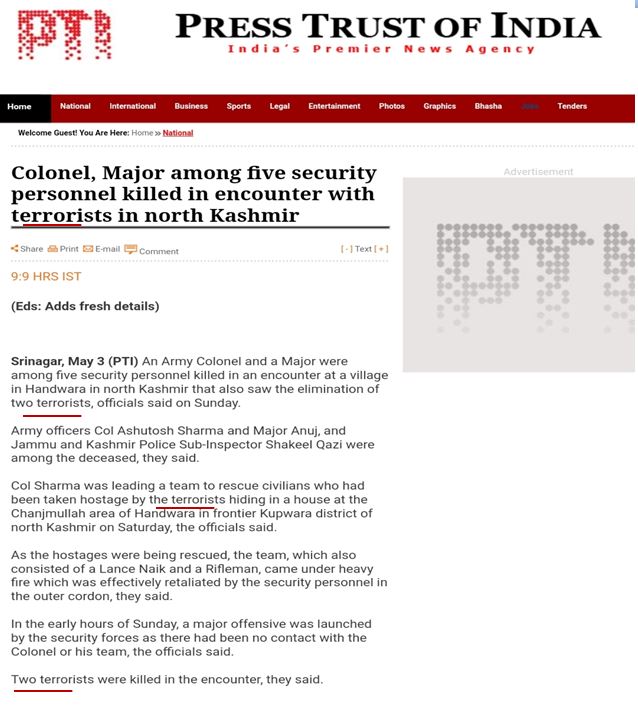 The Indian Army personnel, along with the Jammu & Kashmir Police Sub-Inspector gave the supreme sacrifice in order to avoid collateral, civilian casualty but The Wire wants to belittle their sacrifices and evoke sympathy for the slain jihadist terrorists as part of the ecosystem’s larger agenda to escalate unrest in Kashmir.

The Wire expressly credits PTI for the report and falsely attributes the word “alleged” terrorists to the news agency as many as three times.

While PTI reported the “elimination of two terrorists”, The Wire corrected it according to its own anti-India ideology, writing, “death of two alleged terrorists”.

But this is not it, later in the same report, The Wire accuses Colonel Sharma of leading a team to rescue civilians taken hostage by “alleger” terrorists. While the original PTI version makes it pretty clear that the team led by Colonel Sharma rescued hostages held by terrorists. With this little manipulation, The Wire has virtually insinuated that the team of conducting a fake encounter.

What The Wire report really does is make the PTI look bad because it has explicitly declared the report to be taken from PTI feed, but the readers won’t know about the little manipulations that it has made in this report.

PTI must take action against The Wire, for the latter’s actions not only amount to tarnishing the image of the Indian Army, apart from being blatantly anti-national but also create a very negative perception of the PTI.

What this report also exposes is how terror apologists in the left-leaning media outlets have been trying to downplay the issue of Pakistan-backed terrorism in Kashmir.

Time and again, they refer to Pakistan-sponaored terrorism in Kashmir as “militancy”. Either they are too naive to understand the stark difference between terrorists and militants, or they actually believe that jihadists trained by Pakistan Army and ISI are actually militants.

They are not militants.
They are Pakistan sponsored terrorists trained by Pakistan Army and the ISI.
How hard is it to report factually? Don’t legitimize the terror industry. #Handwara pic.twitter.com/9z0fYdWFGn

Either way, the media outlets have been abusing their freedom of speech to legitimise terror activities in the Union Territory of Jammu & Kashmir.

The Wire has once again exposed its own obnoxious biases and the PTI must initiate stern action against it.

Amazon and Flipkart are in for a big shock; Government is all set to revitalize the local stores