‘We’re No. 1,’ Rahul Kanwal tries to take on Arnab Goswami again, gets shown his place

He should not have tried in the first place

Ever since Republic TV was launched by Arnab Goswami, there has been a paradigm shift in India’s mainstream media industry, with the Arnab Goswami-led TV channel repeatedly bagging the first rank both in terms of public reach and viewership.

However, denialism is the real issue here as India Today journalist has been repeatedly trying to engage in a feud with Republic TV in order to claim itself as the number one channel in terms of viewership.

In fact, India Today has repeatedly claimed that their channel has the highest viewership in India. India Today and Rahul Kanwal have claimed that “TIMES have changed the REPUBLIC now watches INDIA TODAY”.

Meanwhile, Republic TV has claimed that is the number one channel in terms of viewership. Now, one wonders who is lying and who isn’t?

Yesterday, Rahul Kanwal, one of the leading India Today faces started a blitz of his own on the microblogging platform Twitter. In a direct dig at Republic TV, Kanwal said, “Viewers are rejecting shouting fests and choosing to watch real news. Ignore the theatrics. Watch: Real news. Not noise. To each one of our viewers who make this possible, thank you.”

But the Broadcast Audience Research Council (BARC) tells a completely different tale, and it seems that Republic TV is far ahead of India Today.

Competition has gone crazier than usual because the rug has been pulled from under their feet. Viewers are rejecting shouting fests and choosing to watch real news. Ignore the theatrics. Watch: Real news. Not noise. To each one of our viewers who make this possible, thank you 🙏 pic.twitter.com/qOsTtJamo7

What causes this inconsistency in India Today’s claims and BARC data? The fact remains that Rahul Kanwal and India Today tried to play it smart by choosing a very narrow form of data.

While Republic TV remains the leading TV channel in terms of All India (Urban+Rural) Males 22+ individuals for ratings, India Today is flaunting around a much narrower set of viewership data- Males 22+AB in (only) megacities.

In mega cities, India Today enjoys only a slender lead over Republic TV but at a larger, all-India level, it trails way behind Republic TV in the English news genre.

India Today and Rahul Kanwal were, of course, called out for such concoctions, but Kanwal had some of the most elitist and bizarre excuses that he subsequently unleashed.

Kanwal tweeted, “Folks are asking why we look at mega city data. That’s because English news viewership is measured on the basis of big metro cities just like Hindi news is measured on Hindi Speaking Markets (HSM). It’s the accepted currency of comparison. That’s what all key stakeholders look at.”

Just look at the level of elitism involved here, while it is acceptable that one will not go into, say Telugu viewership data where Hindi news channel viewership is to be gauged, isn’t it rather delusional to say that English news channels are consumed only in mega cities?

What bizarre logic is this? Hindi News channels will obviously not take Tamil Nadu’s viewership data into consideration. But to presume that English news is consumed only in megacities is delusional. https://t.co/YxK57DidIY

If you look the viewership ratings closely, you would realise that Republic TV has a total of 1755 weekly impressions, out of which only 618 are confined to mega cities.

Similarly, in the case of Times Now, only 333 of 815 weekly impressions are confined to mega cities.

What does this mean? The only inference that can be drawn is that a major chunk of the English news genre market actually falls outside the mega cities.

But Rahul Kanwal as elitist as he sounds, thinks that only mega cities need to be taken into consideration. 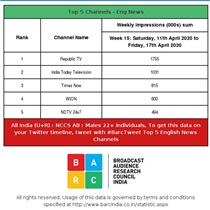 But Rahul Kanwal came up with even more defeatist logic. He tweeted, “Sir we can only compare where distribution reach is roughly equal and not in markets where our channel isn’t visible. Fact is, where viewers have a choice, they are picking @IndiaToday over all others. That’s a powerful statement from audiences.”

Sir we can only compare where distribution reach is roughly equal and not in markets where our channel isn’t visible. Fact is, where viewers have a choice, they are picking @IndiaToday over all others. That’s a powerful statement from audiences

But why does this particular channel have a poor market reach? This is a classical case of claiming that since I didn’t fight the entire battle so I didn’t lose. India Today is a much older news channel compared to Republic TV that was launched only a few years ago.

India Today had all the time and resources in the world to push its reach into a clearly prolific market by firming up its distribution teams, and working on DTH and cable TV providers to improve their marketability and grab maximum eye balls. This is a rather poor cover-up of its failed marketing strategy.

Nonetheless, social media users had a field day exposing Rahul Kanwal and India Today’s claims of being the number one news channel in the country in terms viewership.

Even Rahul Gandhi can take this trick from @rahulkanwal's playbook and claim all India victory based on Kerala Loksabha Results against PM @narendramodi (Won Overall India)https://t.co/dPINsWgVrl

Many kids participated in a 100 meter race. A kid who was the 1st until the 10 meter, eventually ended up being last. Organizers gave medal to the winner. The kid who came last said, i am the winner of the 10 meter race. That kid is Rahul Kanwal.

Good evening @rahulkanwal, how do you think the TRPs are looking tonight, mega cities included? 🤣

Clearly, Republic TV led by Arnab Goswami is a much more loved news channel at a pan-India level cutting across regions, spreading into mega cities, urban and semi-urban areas. India Today enjoys a slender lead in mega cities, which too isn’t something that would set it apart.

India Today and Rahul Kanwal attempted to manipulate the numbers, but they have been reduced into laughing stock instead.

‘We will kick you out now,’ China used COVID-19 to occupy South China Sea. But countries have ganged up against it

After the massive success of Ramayan, Doordarshan is coming with another all time hit to take on private TV channels

Dear Mr Kejriwal before suggesting “formula sharing” to the PM Modi, you should have done a basic Google search