‘We stand with Tablighi Jamaat,’ Student groups of JNU and Jamia come out in support of Corona super spreaders

What more can we expect?

At a time when the entire nation is in a state of shock over how the Tablighi Jamaat, an orthodox Islamist organisation suspected for terror links all over the world has suddenly spread Coronavirus all over the country who are now spitting, pelting stones and firing at health officials and police personnel, the protest-Islamism syndicate in Delhi’s infamous Central universities- the JNU and the Jamia Milia Islama University have extended support to the Tablighi Jamaat.

Issuing a three page statement over the Tablighi Jamaat- Nizamuddin Markaz fiasco, the Jamia Coordination Committee has tweeted, “Their (Tablighi Jamaat attendees) only fault is not abandoning their people unlike the govt which abandoned the migrant labourers and left them to die. We will not let the failures of this bigoted govt be washed over with Islamophobic fantasies and communal tantrums. We stand with the Nizamuddin Markaz.”

While the Jamia Coordination Committee is crying “Islamophobia”, the Maulana Saad who had organised the trans-national conference, and could be heard saying, “They are trying to stop & divide us…asking us not to gather, they’re trying to scare us by saying we will get infected…This restriction is placed to stop Muslims from joining hands using a virus…”, is absconding even as the entire nation bears the brunt of his misadventures.

Their only fault is not abandoning their people unlike the govt which abandoned the migrant labourers and left them to die. We will not let the failures of this bigoted govt be washed over with Islamophobic fantasies and communal tantrums. We stand with the Nizamuddin Markaz. ✊🏽 pic.twitter.com/gmABj53xXY

Shocking! Maulana Saad, superspreader #Corona, Tablighi Jamaat: "They are trying to stop & divide us…asking us not to gather, they're trying to scare us by saying we will get infected…This restriction is placed to stop Muslims from joining hands using a virus…" @TimesNow pic.twitter.com/NmBEbEiXt5

Even though the Maulana Saad is absconding, the Muslim students body of the Marxist-Atheist JNU wants the FIR against the Tablighi Jamaat revoked. The Muslim body has released a poster which reads, “Revoke FIR against Management.”

Meanwhile, the Muslim Students of JNU, a Facebook page, has posted this image which reads, “Stand with Tablighi Jamaat”, again demands revocation of FIR and even goes on label action against Tablighi Jamaat as “Islamophobia”, while reiterating that Muslims are not scapegoats. 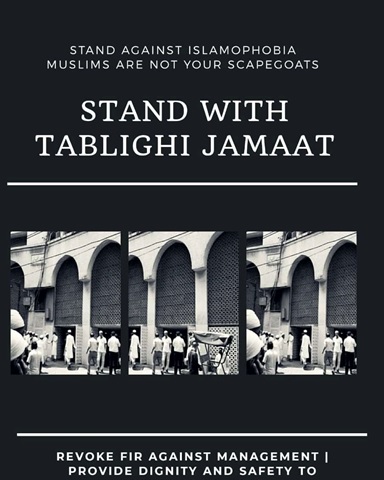 Interestingly, this is the same Facebook Page which has also been highly vocal in demanding the release of Sharjeel Imam, an Islamist-secessionist who had provoked Muslims in the “Chicken’s neck”, a 22-kilometre narrow stretch of land which connects the northeast with the rest of India and is crucial for the country’s security, to rise against India and to secede the entire Northeast from the rest of the country.

Unfortunately, what both the JNU Muslim Students Body and the Jamia Coordination Committee fail to explain is why the Tablighi Jamaat hosted a trans-national conference inviting 8,000 attendees even from Coronavirus-hit countries at a time when prohibitory orders were in force banning all religious gatherings with more than 20 people.

At 57 sec rioter is asking for hot water, perhaps to throw on medical workers. Pathetic!!! https://t.co/TGVlzO8OPK

Disgusting. Two Doctors of Gandhi Hospital in Telangana attacked by relatives of a #COVID19 patient who had died. How can you even attempt something so foolish and idiotic? Doctors and Nurses are risking their life throughout India and the world to save us. Shame on these goons. pic.twitter.com/ZoC8In39V4

#Breaking 1st on TIMES NOW | A search party was fired upon for searching Markaz attendees in Madhubani.

What this protest-Islamist syndicate also fails to explain is why the Maulana Saad is absconding now, when the entire nation is bearing the brunt of his misadventures. Most importantly, they have nothing to say about those Tablighi followers who are spitting and mobbing police and health officials across the country from Delhi to Indore, and from Ahmedabad to Hyderabad, and Mahbubani in Bihar.

Spitting, attacking, stone pelting at police and doctors: How radical Islamists have come in the way of India’s coronavirus fight

After getting exposed with its shoddy medical exports, China is now trying to save face