Race to the bottom: The UK economy is pushed back by 3 years due to Coronavirus

by Amit Agrahari
in Europe

Coronavirus induced lockdown has completely destroyed the economy of many Western European nations. Some of the largest economies of Europe, like France, Italy, United Kingdom, and Spain are hit hardest from the lockdown. United Kingdom, the second largest economy of the continent after Germany, is transported three years back economically, as per a report by consulting agency EY.

As per the report, with the massive damage done by Coronavirus to economic growth and jobs, the country is set to witness a short run but seep recession and the economy would dive so much deep into negative territory that it would reach again to 2019 level after three years in 2023.

In the calendar year 2019, the GDP of UK in terms market rates was 2.744 trillion dollars and 3.162 trillion in PPP terms. In the initial days of the spread, the political establishment of the country refused to impose lockdown, and schools, colleges, restaurants kept running. But after the country started reporting hundreds of deaths everyday and the Prime Minister himself getting infected, the government imposed one month lockdown. 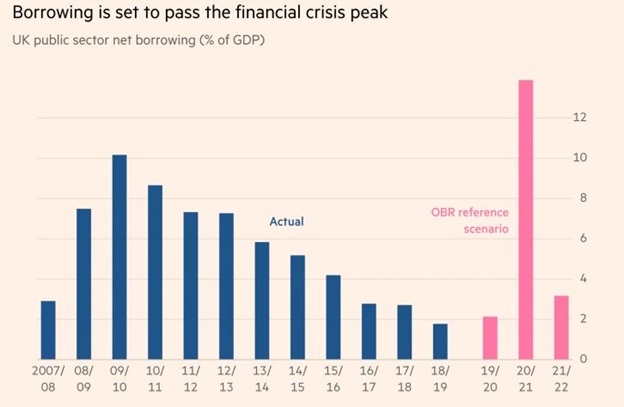 After that majority of the sectors came to a halt and half of the consumer spending, which is engine of British economic growth, is set to be delayed or lost completely. The billions of dollars of economic package announced by Finance Minister would help the businesses and mitigate long-term impact on the economy, but in short run, UK is doomed. “[The support] is absolutely crucial to limiting the potential longer-term damage to the economy,” said Howard Archer, chief economic adviser to the EY Item Club.

The UK economy is set to witness negative growth of 6.8 percent in 2020, and for the second quarter, the output would shrink by 35 percent if the lockdown continues, said a report by office for budget responsibility.

The government is pumping huge money and therefore fiscal deficit would be highest ever after World War II. “The Office for Budget Responsibility said on Tuesday that in this scenario, government borrowing would rise by £218bn to £273bn in 2020-21, taking the deficit to 14 per cent of gross domestic product — the highest since the Second World War and well above the financial crisis peak of 10 per cent,” wrote Financial Times, most respected financial newspaper in UK.

Moreover, UK based newspaper- The Guardian reported that Britain is already facing a hunger crisis due to lockdown as 1.5 million (15 lakh) Britons go without food all day. There are 3 million people in the UK who are forced to skip some meal, as they cannot afford it. “This needs urgent and substantial investment from central government which needs to put money directly into the pockets of families who can’t afford food,” said Anna Taylor, director of YouGov poll, which carried out a poll on the number of people sleeping without food.

Sabine Goodwin, the coordinator of the Independent Food Aid Network, said the situation is spiraling out of control and the government is too slow to respond. “Food banks in our network are seeing as much as a 300% increase in footfall compared to this time last year but are still struggling to source enough appropriate food,” she said.

The UK government is aware that the situation is very poor in the country and therefore, they are not hiding anything from public. UK chancellor Rishi Sunak said it is important to be honest that the virus and lockdown is going to have serious impact of economy and the country must defeat the virus first as there is no choice between health and economy.

A few years ago, the UK was the world’s fifth largest economy, ahead of India. But now it has slipped to sixth spot and with Coronavirus induced recession, it would be miles behind India by next year. The stupidity of Boris Johnson has cost the UK heavily, who chose livelihood over lives and ultimately has to bear the consequences.

Under Uddhav Thackeray's rule, Maharashtra Police is getting beaten up by radical Islamists

Big victory for Arnab in the Sonia-Antonia case. Court upholds his freedom of speech and quashes FIRs