An FIR has been registered in UP against AAP MLA Raghav Chadha for spreading fake news against UP CM Yogi Adityanath. Yesterday Chadha has tweeted Yogi govt is beating the migrant workers who are travelling back home from Delhi.

“According to sources, Yogi ji is getting migrants returning from the national capital to Uttar Pradesh beaten up. He is asking them why they went to Delhi and saying that they will not be allowed to go to the national capital again. My appeal to UP government is not to do this and not to increase the problems in this difficult hour,” tweeted Chadha. 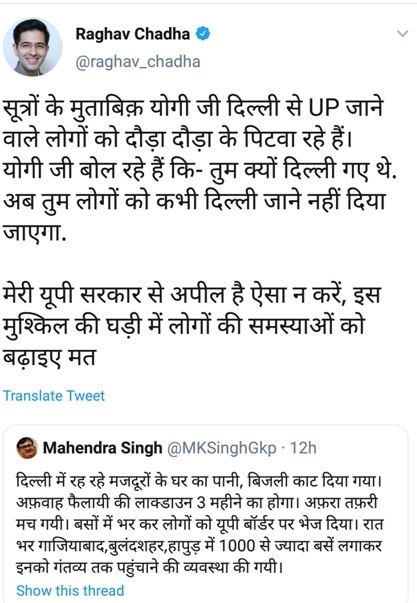 So, after getting slammed left right and centre, @raghav_chadha has deleted this tweet.

One additional information: He is among most educated and media savvy leaders of @AamAadmiParty .

Whenever someone brags about education and degrees, throw this tweet on them. pic.twitter.com/Afm1rpf0SL

Media advisor to Yogi Adityanath, Mritunjay Kumar, called it fake news and said that UP government will take action against Chadha. “This is sheer false news, even during such an epidemic, his party is not deterred from playing dirty politics, how can the Aam Aadmi Party fall so low? The Uttar Pradesh government and the police will take specific action on this tweet,” said Kumar.

After being trolled by people across the political spectrum, Chadha deleted tweet. “Some AAPtard says @raghav_chadha looked ‘cute’ while ‘DISTURBING’ food. Super AAPtard @raghav_chadha flirts with her and says he is ‘flattered’ – all this in the midst of tweeting fake news and deleting it later! EVER seen a bigger jerk?,” tweeted Shefali Vaidya, who is author and political commentator.

Some AAPtard says @raghav_chadha looked ‘cute’ while ‘DISTURBING’ food. Super AAPtard @raghav_chadha flirts with her and says he is ‘flattered’ – all this in the midst of tweeting fake news and deleting it later! EVER seen a bigger jerk? pic.twitter.com/Sq8q4yulBQ

The whole debate erupted due to migrant workers crisis. Lakhs of workers of UP and Bihar, who work in Delhi in sunny days, gathered on Anand Vihar bus terminal as Kejriwal government ferried them to terminal from different parts of the city. Images from Delhi’s Anand Vihar Interstate Bus Terminal (ISBT) show thousands of migrants huddled together waiting for buses from UP that would ferry them towards their hometowns.

Delhi: Migrant workers in very large numbers at Delhi's Anand Vihar bus terminal, to board buses to their respective home towns and villages. They have walked to the bus terminal on foot from different parts of the city. pic.twitter.com/IeToP3hX7H

The images of a stampede-like situation at the Anand Vihar ISBT is terrifying as even one infected person in this crowd could trigger a huge disaster insofar the spread of Coronavirus is concerned and it seems highly probably that Delhi CM Kejriwal has diverted a major disaster towards Uttar Pradesh.

For all we know, the Delhi government seems to have pushed every single of those migrants into a virtual death-knell. And when they reach home, the state of Uttar Pradesh too awaits a major disaster as entire villages and towns could get infected with the novel Wuhan virus, if even one person in these crowds was carrying COVID-19.

This however is not just monumental mismanagement by the Delhi government, but an organised disaster. A statement by the Uttar Pradesh government has accused the Kejriwal government of disconnecting water and electricity supply to the migrants. It added, “During lockdown, people were not even provided food and milk in Delhi.”

The Uttar Pradesh government has also stated that DTC buses were used to drop off the migrants to Delhi border. What further reveals disgusting politics on the part of Delhi government, these destitute workers were misled with announcements and rumours that there were buses waiting at the Delhi border to drop them to their hometowns in the neighbouring state of Uttar Pradesh.

Thus, Kejriwal treated poor migrants from Uttar Pradesh with utter disdain and decided to throw them out in the midst of a deadly crisis. This is clearly an organised disaster as the Kejriwal government put up a pathetic show coming out completely listless at a time of crisis. It was as if the authorities were waiting for this to happen.

As we fight Coronavirus, India must also fight racism against people of the northeast starting from Delhi