Anti-India propaganda demolished with one ratio

If you want to know the scale of anti-India agenda being carried out by western media outlets, and their poorer homegrown version, just search ‘India testing less’ on Google. Our search showed articles from New York Times, The Atlantic, BBC, Al Jazeera, Scroll, and National Herald articles on the first page, all with single arguments: India is testing too little to know the exact number of cases, and the country’s numbers are underreported.

In the last few days, almost every global media house, and Indian media houses from the left side of the political spectrum argued that India is testing very little. Karan Thapar, Barkha Dutt, and Rahul Kanwal interviewed an economist who argued that more than 80 crore people of the country, or 60 per cent of the entire population might be affected by COVID-19. 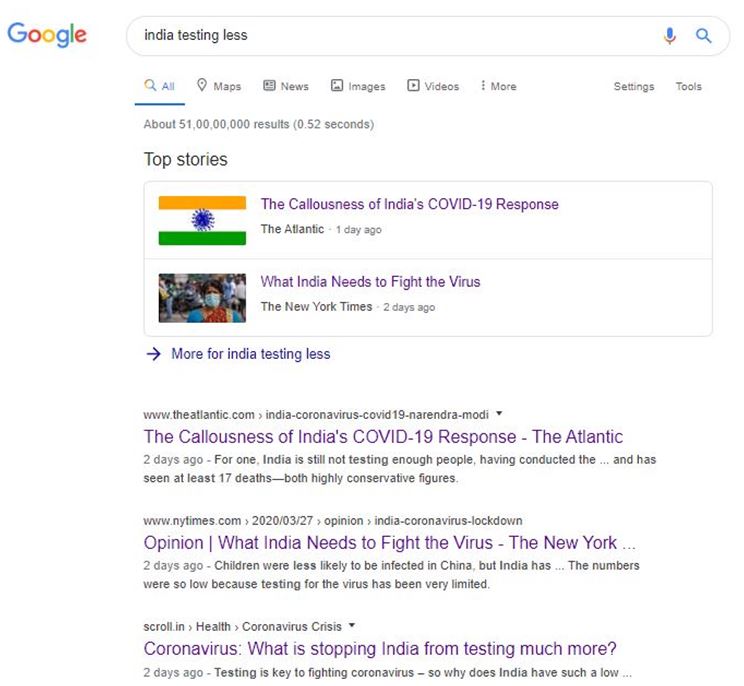 But if India is testing too little and the cases are underreported, then the percentage of positive cases in 100 tests should obviously be very high. Because, if more than half of the country’s population is affected, and we are testing only those with acute symptoms like Fever, cough, and breathing problems- the percentage of positive cases must be close to 80 or 90 based on their alarmist tone, or at least 30 to 50 for the sake of making some sense.

However, as per reports from the Ministry of Health and Family welfare, the percentage of positive cases per 100 tests is 2, which is the lowest among all big countries. Only Taiwan, a small island in East Asia with less population than Delhi has better results than India with 1 per cent.

“We’re preparing to make India’s testing protocols more aggressive. To test is to know! Especially on what to do & where to focus after #Lockdown21 Also imp to note that early targeting/airlifting/isolation & surveillance seems to have worked – 2%positive cases per 100 tests,” tweeted Shamika Ravi Yesterday, former member of PM Economic Advisory Council.

We’re preparing to make India’s testing protocols more aggressive. To test is to know! Specially on what to do & where to focus after #Lockdown21
Also imp to note that early targeting/airlifting/isolation & surveillance seems to have worked – 2%positive cases per 100 tests. pic.twitter.com/L1ui10eESf

“The growth rate of confirmed cases began declining in India from March 23rd – probably due to strict measures taken on March 12th. Travel ban (to certain countries) + closure of schools/colleges + Epidemic Disease Act invoked by some states,” she tweeted today.

New York Times gave space to Ramanan Laxminarayan, who has predicted that 60 per cent of India’s population will get infected as per his mathematical modelling and in the article published on March 27, he wrote, “The country has three to four weeks to create an enormous, affordable and easily available testing infrastructure, contain local outbreaks and prepare for the avalanche of the coronavirus.”

BBC, the media organization which still lives in colonial hangover even after India had taken over Britain as the fifth largest economy, published an article by Indian correspondent titled, “Coronavirus: Why is India testing so little?”

National Herald, the mouthpiece of Congress, published an article titled ‘Number of cases may be less as India’s testing rate too little to get the real COVID-19 picture’ and argued “India has conducted 18 tests per million of its people. Italy’s, UK’s, US’ and South Korea’s testing rates stand at 5268, 1469, 1280 and 6931 per million of their populations respectively”, ignoring the fact that the percentage of positive cases is less than 2 per cent.

India media has been known for sensationalism for decades, but at a time when the world is facing the worst public health crisis of modern age- A little sanity was expected. But the leftist portals have stick to the agenda and fear-mongering in the case of Coronavirus too. To attract more eyeballs, media organisations exaggerate everything and make sensational headlines. The print medium is relatively better but few websites and almost all the television channels are more of Ekta Kapoor serials than being platforms for sensible coverage and informative reporting.

Media exaggerates every issue and the TV shows lack mature content. The Prime Time shows on TV give a sense that the world will fall apart on just the other day. The media needs to behave more responsibly, at least on the matters of public health crisis such as Corona.