The Janmnabhoomi temple of Shri Ram, the Prabhu of Nishadraj Guha, Kevat and Shabri will have a SC trustee

A fitting tribute to Shri Ram – the unifier of Hindu forces

The holy town of Ayodhya was the witness of the shilanyas ceremony of Shri Ram Janmbhoomi. Preceding the Shilanyas were the rituals of Vastu Poojan, the invocation of 35 Koti Devatas [not 35 crore Devatas] and the pujan ceremony of Seven Shilas, which were then placed in the foundations of the to be constructed complex. At 1:34 p.m., the first shila was laid by Kameshwar Chaupal, a Harijan, who hailed from the state of Bihar. The first shila was made from the ashes collected from the 56 yajnas performed in a temple in modern day Bangladesh.

As he narrated this incident in his book ‘Ram Janmbhoomi Ka Satya’, Bhanu Pratap Shukla mentions, “As he laid the foundation to the temple to Shri Ram, Shri Kameshwar Chaupal with the Shila on his head looked as if the Kevata had himself arrived to wash the feet of his beloved deity with the holy Gangaajal.” 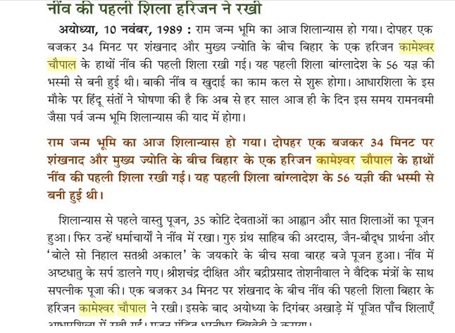 Years later, Kameshwar Chaupal is once again in the news, and this time for even better reasons. Following the announcement of a trust for the restoration of the Shri Ram Janmbhoomi Temple Complex at Ayodhya, Shri Kameshwar Chaupal, along with famous advocate K Parasaran was appointed as the trustee in the trust titled ‘Shri Ram Janmbhoomi Teerth Kshetra’. To be fair, this is one of the best tributes, that could be ever given to the legacy of Shri Ram Chandra, who continues to be a unifying factor for the Sanatan Dharma.

Yesterday, Narendra Modi tweeted a snippet from his speech in the Lok Sabha, wherein he announced the constitution of the trust for the purpose of restoring the Shri Ram Janmbhoomi complex in the city of Ayodhya. Yogi Adityanath wrote, “Today’s day is historic. The first shila of Shri Ram Janbhoomi mandir was laid by Shri Kameshwar Chaupal, a Harijan. We had decided that there shall always be a member from the backward communities in the 15 member trust titled ‘Shri Ram Janmbhoomi Teerth Kshetra’” –

Today we take a historic step ahead towards building a grand Ram Temple in Ayodhya!

It was my honour to address the Lok Sabha on this subject, which is special to many.

I also applauded the remarkable spirit of the people of India.

This is what I said… pic.twitter.com/MJHDHnR3Xo

It is really heartening to see that those devotees of Bhagwan Ram have also got a place in the trust, who laid the foundation of the temple complex. There have been umpteen incidents in the life of Bhagwan Ram, which prove beyond doubt that he was a warrior who cared for the downtrodden and the backward people, unlike the image the leftist intellectuals want to portray about him. Be it his friend Nishadraj, or the old lady Shabri, who fed him Ber [also known as Indian plum], or even Ahilya, Shri Ram’s life is rife with examples of how he cared for the poor and the downtrodden.

To begin with, how can we forget the example of Devi Ahilya? According to ancient texts, Devi Ahilya was the wife of Maharishi Gautama. She was once cursed by him due to a misunderstanding, due to which she turned into a stone. However, when she pleaded forgiveness, Maharishi Gautam said that she would be liberated by the sparsha of a Devata himself. Years later, when Bhagwan Ram had arrived en route to Mithila, along with Lakshman and Guru Vishwamitra, he set Devi Ahilya free. This is not all; Bhagwan Ram also took help of the Vanars as he set out to rescue Sita. Vanar literally means forest dwellers, not monkey as misinterpreted.

During the 14 years of his exile, Bhagwan Ram left no stone unturned in order to unite all castes and communities into one. When he left Ayodhya along with Mata Sita and his brother Lakshman, Bhagwan Ram had spent his first night in the province of Ringawerpur province, which was ruled by his beloved friend Nishadraj Guhya. When Nishadraj came to know of Bhagwan Ram’s arrival, he welcomed him with great pomp, and soon learnt about Bhagwan Ram’s 14 year exile. When Nishadraj offered his own kingdom, Bhagwan Ram politely refused and upheld his vow of staying in exile for 14 years.

Today, Nishad is considered a member of the Dalit or the backward community. However, Bhagwan Ram not only considered him as his friend, but also treated him like an equal. In Tulsidas’ epic Ramcharitmanas, there is the mention of a Kevata, who not only guides Bhagwan Ram beyond the outskirts of Ayodhya, but also washes his feet with the holy Gangajal. Bhagwan Ram also fulfilled the wishes of the Kevata, who wanted him and his entourage to cross the river on his boat. This excerpt is not found though in Valmiki Ramayana.

Interestingly, when Bhagwan Ram set out to rescue Sita from Ravana, he met an old lady enroute, whose name was Shabri. Shabri was an old tribal lady. She was criticized for her humble origins, yet she acquired education from Rishi Matanga. Pleased by her devotion, Rishi Matanga granted her a boon before leaving the earthly world that one day, an incarnation of Bhagwan Vishnu would come to meet her. She would be liberated from the worldly bonds and attain Moksha. Years later, when Bhagwan Ram arrived at her cottage while searching for Mata Sita, Shabri’s happiness knew no bounds and she brought him to her cottage.

Shabri had brought a huge bunch of Bers, which she personally tasted to check which one was sweet. Bhagwan Ram lovingly accepted the fruits she offered, and when Lakshman objected, Bhagwan Ram said, “Lakshman, these ber are not consumed, they are the sweetest, since they contain pure, unadulterated love.” This anecdote also mentions how Shri Rama never discriminated with the poor and the downtrodden, and how he cared for even the most poorest of his devotees.

Now that the Modi government has kept a position for those from the downtrodden communities as a permanent trustee, it is perhaps one of the best tributes to the legacy of Shri Ram Chandra, who had laid the foundations of a culturally developed Bharatvarsha. The God never cares for the origins of the devotee. We hope that the trustees play a crucial role in the restoration of the Ram Janmbhoomi complex and restore the legacy of Shri Ram Chandra with finesse.

YouTube is silently writing the obituaries of print and television media

Of tubelights and damaads: Adhir, Rahul, Shashi, Suresh all got trolled ruthlessly by PM Modi

The Wuhan Virus Pandemic has cleaned the slate for a new world order, one where India plays a crucial role

Crores of lives so far: Why Industrial Animal Farming is the Biggest threat to humanity

‘India should learn from us,’ Chinese Communist Party mouthpiece Global Times tries to give ‘Gyan’ to India, gets shown the mirror

Ignored warnings, shielded China: How WHO colluded with Chinese Communist Party to mislead the world about Coronavirus