Cow is considered a sacred animal in India, and the slaughter of Cows is banned in most of the states except Kerala, West Bengal, and Northeastern states. Cow slaughter is a punishable offense, as per the Prevention of Cruelty to Animals Act, 1960, passed by the then Union government under country’s first Prime Minister, Jawaharlal Nehru.

Yet, the Congress party in Kerala has repeatedly tried to hurt the sentiments of cow worshiping majority of the country. In the latest episode of the cruelty against animal, the Congress party distributed beef curry outside a police station under the leadership of Kerala Pradesh Congress Committee (KPCC) general secretary Advocate K Praveen Kumar. 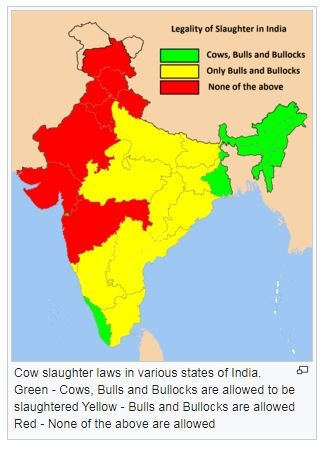 The programme was organized to oppose the Kerala government’s reported move to drop beef from menu for the state police trainees. “This is a clear sign of Kerala CM Pinarayi Vijayan’s Sangh leanings. He met Modi immediately after taking oath as CM and by understanding with BJP he appointed Loknath Behra as Director General of Police. Behra had given a clean chit to Modi and Amit Shah earlier in Gujarat riot case. Now Behra is implementing Sangh agendas by the admittance of Pinarayi. Congress will expose Pinarayi’s double stand all over the state,” said Kumar, as per the report by ANI.

However, the Kerala government denied the reports that beef has been dropped from the menu for state police trainees. “As per the decision of the Mess Committee which consists of trainees’ representatives and police officers, they were instructed to prepare healthy meals with food available in their respective areas. The aim is to ensure that the trainees get the energy they need through diet,” reads the statement by the state police department.

This is not the first time Congress workers and leaders have tried to hurt the sentiment of the majority by organizing beef festival or distribution of beef. Previously, in 2017, the workers of Kerala Youth Congress slaughtered a cow in public, in order to protest against central government’s Prevention of Cruelty Act (Regulation of Livestock Markets) Rules 2017. Not just the Congress party, but, the leaders of Left parties too organized beef parties in over 300 places across the state, to register the protest.

“The government’s decision is an act of cruelty against a large population. To oppose this we will slaughter cattle in public and we will distribute the meat to the public,” said the Youth Congress leader Rijil Makkutty in 2017, when the animal was slaughtered in public and meat was distributed in public.

In the state of Kerala, Congress party fights the election as part of United Democratic Front alliance, which has Islamist parties like Indian Union Muslim League (IUML) and Christian dominated parties like KC (M) and KC (J). In order to please the Muslims and Christian alliance partners, the Congress leaders are organizing the beef festival and distributing beef curry outside the police station.