BBK is bigger than Apple and Samsung combined in India

Most of the consumers in India use Oppo, Vivo, Realme or OnePlus smartphones, but, very few of them are aware of the fact that all these brands are owned by a single company: China-based BBK Electronics.

As per Q3 2019 data from Hong Kong-based Counterpoint Research; BBK Electronics is the second-largest company in the world in terms of total smartphones vended, after the market leader Samsung Electronics.

In the Indian market, BBK Electronics is way ahead of Samsung, as its three brands of the Indian market- Oppo, Vivo and Realme account for 43 per cent of the total Indian market. The market share of OnePlus is unknown, but it is estimated to be around 5 per cent. 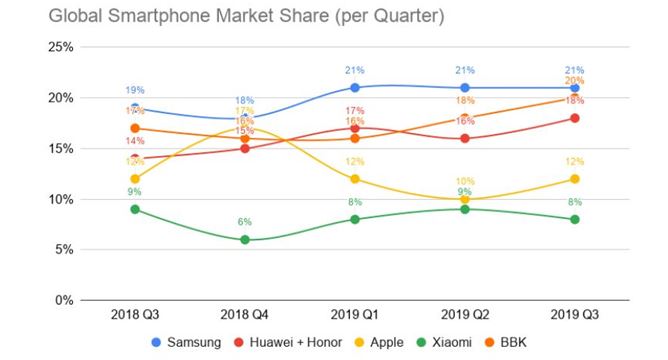 Another China-based Smartphone Company- Xiaomi, is on the second spot with 28 per cent market share, as per Q4 2019 data of Counterpoint research. The dominance of BBK has not reached the level of Nokia at its peak, which used to account for 58 per cent of the Indian market in 2007 but BBK is on the same path.

As per a report by Economic Times, the two major brands of the company- Oppo and Vivo have doubled their combined revenue between April and September last year to 34,500 crore rupees. According to Counterpoint Research analyst Anshika Jain, “Vivo, Oppo, and Realme have all been adopting a 360-degree marketing approach in India in addition to expanding their online channel.”

The brands of the BBK- Oppo and Vivo compete with each other for the Indian market in the low-end smartphone market. Oneplus, the high-end Smartphone brand of the company competes with Samsung in the Indian and Chinese market.

BBK ended the dominance of Samsung, although, the South Korean electronics giant remains a third-largest market player in India after China’s BBK and Xiaomi.

BBK has been operating in the Chinese electronics industry since the 1990s; however, Oppo was founded by Duan Yongping- the founder of BBK- in 2004. Vivo brand was started in 2009 and RealMe, a spin-off brand from Oppo was founded in 2018. OnePlus was founded on 16 December 2013 by former Oppo vice-president Pete Lau and Carl Pei, but, the company remains a subsidiary Oppo, which in turn is owned by BBK Electronics.

BBK brands are betting big on India as the Vivo bagged IPL rights from 2018 to 2022 for 2,199 crore rupees, and is planning to invest 3,500 crore rupees in the manufacturing facility in India. Similarly, Oppo plans to double its production capacity in India by 2020.

In the last few years, especially after 2017, Smartphone manufacturing in India has grown exponentially, with the rise of its user base. Even at the time of slowdown, when the demand for the majority of the products is stagnant, the demand for Smartphones has moved progressed.

India has overtaken the United States of America to become the 2nd largest manufacturer of the smartphone in the world. Make in India has turned around the waves in India’s favour making India a global hub for smartphone manufacturing which is the principal aim of the policy.

In 2014, there were only 2 manufacturing units in India but since the launch of ‘Make in India’ which impressively propelled the scene, the number has increased to 123 units in 2017. With the growing demand for the Chinese brand of Smartphones, which offer many facilities at a low price, the share of BBK is expected to shoot up.

What even the most seasoned economist missed. The good news for sole proprietor businesses in Budget 2020

After losing face in Ladakh, China is desperate to look strong in Taiwan and it’s using Hollywood visuals to prove it