Ever since the CAA protests turned violent, the left-liberal cabal has been continuously trying to propagate the myth of police brutalities. The thrust of their propaganda has been to paint the police forces in a bad light with allegations of brutality and excesses. And make no mistake, the police is an easy target for any protester. In a country like ours, it is easy to make all sorts of allegations against the police and then get away with it. In fact, it is easy to paint the police as being inherently brutal, a false sentiment that the anti CAA protesters clearly tried to exploit.

In fact, ever since the Modi government came to power, the opposition parties and the “eminent” intellectuals who are now leading the CAA protests have been alleging that the BJP has converted India into a Police State.

Amidst such outlandish allegations of fascism, the National Crime Records Bureau (NCRB) has released the Crime in India Report 2018. Among many other takeaways, one of the key findings of the report is a drastic decline in the civilian deaths due to police action. The number of such deaths declined sharply from 786 in 2017 to 112 in 2018.

This sharp decline by itself debunks the myths of fascism, Police State and police brutalities. A close analysis of the data would reveal that the police forces have been extremely professional across the country. Particularly in the case of BJP-ruled states, there is absolutely no evidence of BJP led governments action in a fascist manner or attempting to create a Police State. 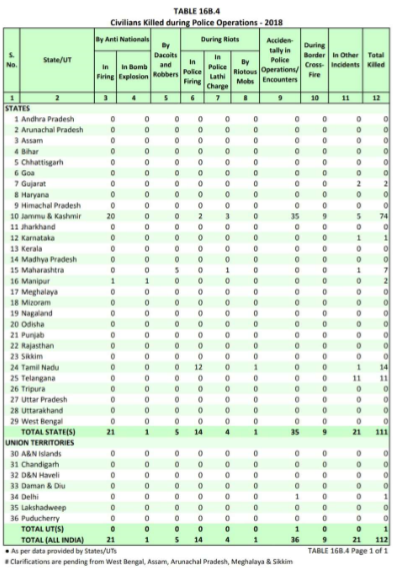 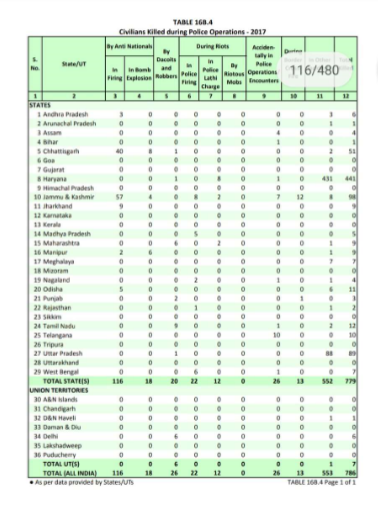 If we were to take a look at the overall position, apart from the state of Jammu & Kashmir and the non-BJP ruled states of Telangana and Tamil Nadu out of picture, the rest of the country witnessed 13 deaths. And while even a single such death is unfortunate and sorrowful, the fact remains that the number signifies a sharp decline in such incidents.

The NCRB data not only demolishes the myth of police forces being unprofessional and brutal but also shows that there are no real signs of fascism, contrary to what the Lutyens’ elites are claiming. In 2018, the BJP was in power in 21 states, covering 70 per cent of India’s total population. The credit for a drastic reduction in the number of civilian deaths due to police action, therefore, goes entirely to the BJP.

Moreover, during the anti CAA violence, the left-liberal cabal was most vocal in its fake propaganda against the Uttar Pradesh police, because the latter had taken appropriate action against the arsonists and vandals. However, statistics show how all such allegations against the UP Police are a mere figment of imagination.

Throughout the anti CAA protests, which mostly took shape of violence, vandalism and arson, there was an attempt to create a negative sentiment about the police and then to exploit it for political purposes. The leftist cabal tried to corner the Modi government over alleged police brutalities. The allegations of India turning into a Police State have also been a regular part of the self-acclaimed intelligentsia’s discourse. However, the NCRB data clearly reveals that there are no trappings of the BJP converting India into a Police State, or the police forces being inherently brutal.