It has now become a trend among the left-liberals to blame the Citizenship (Amendment) Act for everything wrong in their lives. The liberals are trying to encash the anti-CAA protests by playing the victim card and achieving the status of a martyr. It started with Sushant Singh who was removed from Savdhaan India but later tried to present a distorted picture as he claimed that he was removed because he joined the anti-CAA protests. It seems that the bug has also caught up with Zee Media’s video production head Nasir Azmi as he tried to falsely claim that he quit Zee Media in solidarity with the Jamia Milia Islamia students whereas in reality he was put under Performance Improvement Programme, which prompted Azmi to quit the company.

Azmi took to Twitter and Facebook to falsely claim that he resigned to stand in solidarity with the Jamia students. In his post, he claims that Zee Media has failed from its responsibilities of journalism, especially Zee News where he had given his ‘golden time’ of life. He further claims that Zee News failed on whether it is the matter of JNU, Kanhaiya Kumar, recently AMU and Jamia Millia incident and that the channel has tried to mislead the Nation especially on Jamia where students were beaten brutally after CAA act and upcoming NRC. While it’s a separate argument of how the Jamia protests were manufactured and a violent mob had entered the campus through fake IDs, it is absolutely shameful how Azmi desperately tries to peddle lies.

Dear Students of Jamia
Zee News failed on whether it is the matter of JNU, Kanhaiya, AMU and Jamia Millia incident. Channel has tried to mis lead the Nation especially on Jamia where students were beaten brutally after CAA act and upcoming NRC.

Amit Kumar Singh, Senior Producer, Zee News, took to Facebook to call out Azmi’s lies and shared a letter which clearly states that Azmi has been put under a PIP for the duration of one month as his performance was not up to the mark. The letter further states that should Azmi’s performance not improved under the aforementioned period, he should treat this time period as his notice period without any further notice. 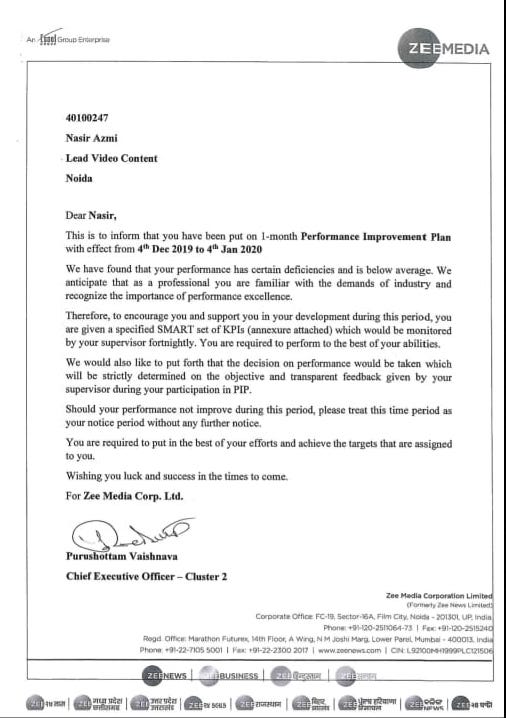 Azmi desperately tagged the likes of Swara Bhasker and Congress on Twitter hoping to generate some mileage over his ‘brave’ move to resign from Zee Media albeit to no avail. The letter clearly indicated that Azmi’s performance is below average and the timing of Azmi’s quitting in the middle of his PIP indicates that Zee Media was going to sack him after the completion of his PIP.

Recently, in a beautiful attempt of deception, actor-comrade Sushant Singh boasting his revolutionary nature by comparing himself to the likes of Bhagat Singh, Rajguru and Sukhdev, claimed that he was fired from the show ‘Savdhaan India’ as he took part in a protest to extend his support for the violent Jamia mob. However, according to a report published by an online publication, India Forums on December 5, the cops will themselves narrate the stories instead of Sushant. If things go well and the changes are finalised then the alteration is expected to take place from January 2020.

It is deplorable the way left-liberals are trying to play victim card over the CAA for their personal gains as they look to secure plum jobs by attempting to make a martyr out of themselves.

Not a protest. A terror attack: Here’s how PFI planned the Lucknow attack and how they got nabbed