Newswire
Blake Lively talks of her ‘crazy’ life With three kids 32 mins ago
Yuvraj hails ‘Brothaman’ Rohit after Super Over show 35 mins ago
‘Overtime’ aims to be a quirky alien invasion office comedy series 37 mins ago
Was waiting for the bowler to make a mistake: Rohit 39 mins ago
Meet the BJP’s ‘Fantastic Four’ who are driving Budget 2020 39 mins ago
Narayana Murthy touches feet of Ratan Tata, Twitterati applauds 39 mins ago
Next
Prev

The grey market of high-end smartphones is harming Make in India.

According to a report by the Business Standard, smuggling of high-end smartphones cost 2,400 crore rupees to the exchequer, as the duty on these phones does not go to government coffers. The data regarding loss of revenue was submitted by Indian Cellular and Electronics Association (ICEA) to the Central Board of Indirect Taxes and Customs (CBIC).

The total market of the high-end smartphones (50,000 and above) is around 15,000 crore rupees but more than half of the total demand (8,000 crore rupees) is met through the grey market. As a result, the government loses 2,400 crore rupees of revenue annually, as 12 per cent GST as well as the 20 per cent basic Customs duty is not paid on these phones. 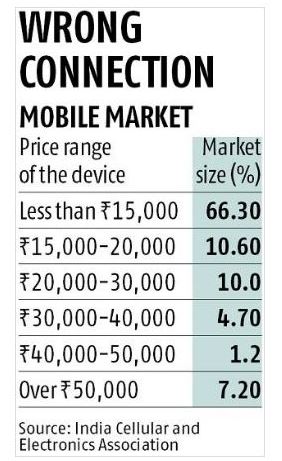 The high-end phone market is dominated by Apple, Samsung, and Google Pixel. The countries like Dubai, Hong Kong (China) and the US offer zero tax trading. According to Indian Cellular and Electronics Association, the phone which cost around 1 Lakh rupees in India, is available at a price lower by 25,000 to 30,000 crore rupees in these countries.

If the government takes action to stop the entry of high-end smartphones through Grey market, the companies will be forced to manufacture these Smartphones in India, as the 20 per cent customs duty will take the prices high and therefore demand would dip. India has become a manufacturing hub for low-cost smartphones but, the high-end smartphones are still manufactured in East Asian countries like- China, Taiwan, and South Korea.

India has overtaken the United States of America to become the 2nd largest manufacturer of Smartphone in the world, trailing China. Make in India has turned around the waves in India’s favour making India a global hub for manufacturing which is the principal aim of the ‘Make in India’ Policy. In 2014, there were only 2 manufacturing units in India but since the launch of ‘Made in India’ which propelled the scene in an impressive manner, the number has increased to 123 units in 2017.

The idea of the Make in India is to transform India into a global hub of manufacturing where the units are to be set up by global and domestic companies. The aim is to increase the employment possibilities in the manufacturing sector to 25 per cent by the year 2025 from the current 16 per cent. The department of commerce and industry with Department of industrial policy and promotion (DIPP) are leading Make in India Campaign to create 100 million jobs. The current manufacturing investment environment has raised the hopes of young India. This sector has produced 38,300 new jobs in the last 2 years.

A few months ago, Foxconn decided to move its assembling process of iPhone X in India to avoid the impact of ongoing US-China trade war. The company will invest 2.5 thousand crore rupees to assemble the iPhone X series in Tamil Nadu.

The move will create 25,000 jobs in the country and make India a manufacturing hub of smartphones across the segments. The next move of the company will be to make Amazon Echo speakers, displays, and printed circuit board (PCB) in India.

The government needs to enforce the custom laws stringently; therefore the companies are forced to move their production in India. Otherwise, the grey market of high-end smartphones will harm the Make in India.