It has been less than 6 months since Jaganmohan Reddy government came to power in Andhra Pradesh. The government has already taken many disastrous decisions, which will damage the macroeconomic stability of the state.

After coming to power, the government cancelled 7,000 MW of solar and wind power projects, scrapping 40,000 crore rupees worth investment in the state. The investors are apprehensive that this will set precedent for other states, and therefore they are considering International arbitration.

Many countries including Japan, UAE, Canada, the US and Singapore invested in the energy projects through their sovereign and pension funds. As the Reddy government has scrapped the projects, the capital wasted in finalization of investment is lost. The ambassadors of these countries wrote to Union Power Minister R K Singh, regarding the cancellation of the project. Many countries took the matter too Ministry of External Affairs too and have even threatened to drag Andhra Pradesh to international arbitration for cancelling clean energy projects.

After the Reddy government came to power, it ordered review of many projects sanctioned by Naidu government like development of Amravati as startup capital, which put the investment by Singapore government at risk, and review of renewable energy projects for which the government formed a high-level negotiation committee (HLNC). These projects were awarded to these companies by previous TDP government, led by Chandrababu Naidu.

The newly elected Andhra Pradesh government refused to buy power from the renewable energy projects, as agreed by the previous TDP government. The companies approached Andhra Pradesh High Court, which ruled in their favour and said, “The respondents (state government) are directed not to take any coercive step of any nature including curtailing production, stopping evacuation or the like except after giving due notice to the generators.”

But, even after the court’s decision, the AP government has not started the purchase; instead, it decided to file a review petition.

The UAE based Lulu Group was allotted land to build an international convention Centre in Vishakhapatnam. But, the Reddy government cancelled land allocation. Suffering the backlash due to regime change, the group decided to not invest in ‘any project’ in Andhra Pradesh.

“We had participated in a very transparent bidding process and were awarded the land on lease for this project. Though we have incurred huge expenses towards initial project development costs such as appointing internationally renowned consultants and designing the project by world-class architects, we agree to the decision of the new Government of Andhra Pradesh to revoke the land allotment for this project. Given the current scenario, we have decided not to invest in any new projects in the state of Andhra Pradesh,” said Ananth Ram, Lulu Group’s Director for India. 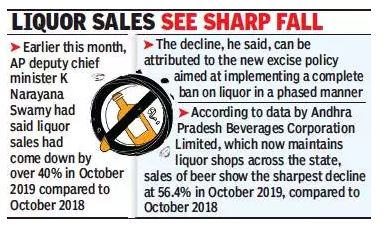 In another disastrous decision which will adversely impact the economy of the state, the government cancelled license of 40 percent of bars. Liquor sale contribute a major portion in the tax collection of states, with the reduction in number of bars, the sale of liquor will go down, and therefore tax collection will also decline.

The Reddy government is scraping one project after another since it came to power. This costs in investment, macroeconomic stability, and the reputation of the state as investment destination. The inability of the state in ‘enforcement of contracts’ and lack of continuation in policies hampers its ability to attract investment for long term projects; because, the companies fear that they could lose the project with the change in the government.

So far, the state government has not been able to match the central government’s enthusiasm for the ease of doing business and enforcement of contracts. The state governments work in partisan manner and therefore are vindictive towards the projects finalized during the previous governments.

The states must understand that the onus for economic growth does not lie only on the central government, the state governments must participate actively to improve macroeconomic stability and ease of doing business. Only then, double digit economic growth is going to be a reality.

The many crimes of Teesta Setalvad that landed her in custody