“But why, oh no..HELLO”, liberals have melted like cheap paint on a sunny day after Ram Mandir verdict

In a historic decision yesterday, the constitutional bench of the honorable Supreme Court handed over the disputed site in the Ram Janmbhoomi case to the followers of the deity, Shri Ram. The bench led by Chief Justice Ranjan Gogoi ruled in the favour of the Ram Janmbhoomi Nyas in this verdict. Apart from that, the Supreme Court also mentioned that the Sunni Wakf Board can build a mosque on an alternate land of 5 acres, anywhere in Ayodhya.

While the verdict was celebrated throughout the nation, and many lauded the Supreme Court for their wise judgment, there were a few who felt jealous by this festive mood as well. The Supreme Court’s decision seems to have hit the liberal fraternity quite hard, who have yet not recovered from the shock of the removal of Article 370 from Kashmir. In a fit of rage, they fiercely ridiculed India, Indians and Sanatan Dharma and tried hard to humiliate them.

Journalist Rana Ayyub was at the forefront of condemning this decision, as she termed the decision as ‘majoritarian’. Her frustration was clearly visible in a series of tweets she had posted. She said, “In every age it has been the tyrant, the oppressor and the exploiter who has wrapped himself in the cloak of patriotism, or religion, or both to deceive and overawe the People.”

In every age it has been the tyrant, the oppressor and the exploiter who has wrapped himself in the cloak of patriotism, or religion, or both to deceive and overawe the People. https://t.co/nFkAEX4Rqx

Not only this, when Advani came out with a statement on this decision, Rana labeled him as a sort of murderer as she tweeted, “If we even sigh, we become infamous, even if they kill, there is no mention”. Even when the decision hadn’t been pronounced, Rana had also posted a very inflammatory tweet, for which she also received a warning from the Amethi police.

Tomorrow is a big day for India. The Babri Masjid, a monument of faith for Indian muslims was demolished on 6th Dec 1992 by those in power today. It changed my life and a generation of Muslims who were 'othered' overnight. I hope my country does not disappoint me tomorrow. 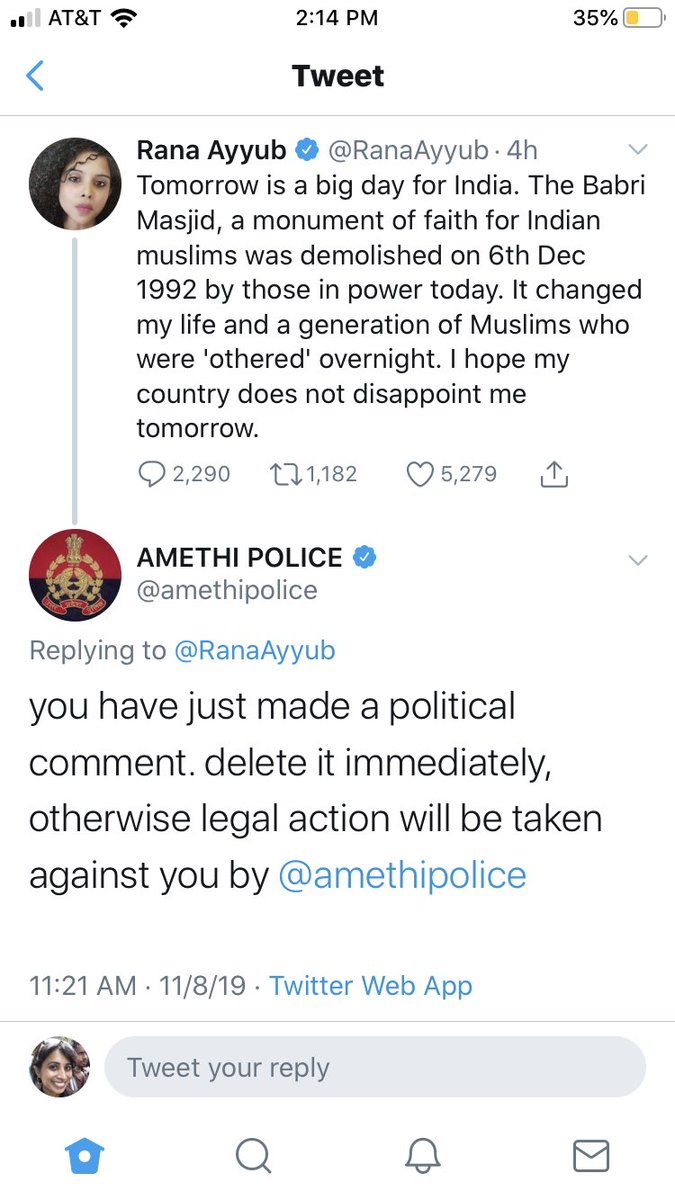 But Rana was not the only one who was shocked by this decision. Pratik Sinha, the self-proclaimed fact-checker who once mocked the building of Ram Mandir, also felt aghast by this decision. Summing up this decision in a tweet, Pratik says, “A bully snatches a kid’s sandwich in school. He also thrashes the kid’s friend who comes to his rescue. The teacher intervenes and let’s the bully keep the sandwich, and gives the kid a slice of dry bread. The principal appreciates the teacher and calls it a ‘balanced judgment’.”

Prateek’s tweet was trolled on social media, and journalist Abhijeet Iyer Mitra quipped, “I don’t know why we have such fun seeing such people being angry. As usual, these ‘fact checks’ propagandists will never tell you how much blood the sandwich child shed for that sandwich.”

Ah the joy of meltdowns … especially from a smug syphilitic wart … no emojis now? #Schadenfreude

Of course as usual this propagandists “fact-check” doesn’t tell you the kid with the sandwich was a vicious psycho who raped, killed & stole the sandwich in the first place pic.twitter.com/rGykoUr94J

Rajdeep Sardesai seemed to be particularly devastated by this decision. In his discussion of this decision on India Today, he, just like Rana Ayyub, declared it a ‘majoritarian’ decision, for which he also faced immediate criticism on the show itself.

Apart from this, Malini Parathasarathy, chairman of The Hindu Group also expressed her frustration over this decision as she tweeted, ” Certainly a regressive day for India with the Supreme Court upholding religious faith & claimed prior antiquity in deciding in favour of Ram Janmasthan. The faith of millions of Indians in the Constitution hangs in the balance as vigilante vandalism appears to have been rewarded!”

Certainly a regressive day for India with the Supreme Court upholding religious faith & claimed prior antiquity in deciding in favour of Ram Janmasthan. The faith of millions of Indians in the Constitution hangs in the balance as vigilante vandalism appears to have been rewarded!

On this tweet, a person named Sriharsha Hegde replied in a tweet that the PMO and the Ministry of Home Affairs should now construct a mental hospital on the banks of river Saryu. This tweet was referred to Subrahmanyam Swamy’s tweet when he suggested building a mental hospital in Ayodhya for Ram Mandir opponents in 2017.

Now how would our Bollywood left-liberals lag behind? Actress Taapsee Pannu tweeted over this decision, “Ho Gaya. Bas. Ab?” However, social media users did not take it long to expose their hypocrisy, as she tweeted a few hours before this tweet at the inauguration of the Kartarpur corridor, “#KartarpurCorridor Prayer for Shukraana begins”. So your faith is faith and our faith is football, right Taapsee?

Swara Bhaskar, who is often in controversy for her tweets and her nonsensical talk, seemed to be quite shocked by this decision, which was evident in her tweet. She wrote, “Raghupati Raghava Raja Ram, Sabko Sanmati De Bhagwan.” Suresh Mathew, journalist of The Quint, also seemed horrified by the celebration being organized to commemorate this decision. He tweeted, “Firecrackers are being burst all over Goregaon in Mumbai. It is showing how much mature democracy is there. In the end, the majority dominates”.

The Honorable Supreme Court with its mature decision has destroyed the propaganda created by the left liberals. How can one be happy with justice and peace in the country, who left no stone unturned in letting the country burn in the name of pseudo secularism? Now shed all the tears you want dear liberals, because there’s no point in crying over spilt milk.