Like an ideal student, Devdutt Pattanaik wakes up on time, eats the teachings of Max Mueller for his breakfast, and tops it up with the syrup of Wendy Doniger’s propaganda before setting off for his daily routine of peddling propaganda on Sanatan Dharma, both online and offline. Lying on Sanatan Dharma is nothing less than oxygen for his personality.

However, it looks like Devdutt Pattanaik has totally lost it as of now. Recently, in reply to a user’s stinging attack on one of his rants, Devdutt had a royal meltdown, as if he wanted to completely expose himself. Following the meltdown, he posted so many obnoxious tweets in a go, that he completely revealed his actual personality online.

Devdutt, who claims to be an expert on Sanatan shastras and Sanatan culture, recently posted an obnoxious tweet, mocking the Shastra Puja of Rafale and the current state of the Indian economy, as shown below –

Cows are sacred. It's urine purifies.
Limbu-mirchi is not. Its smell does not protect.
Sound like fierce advertising competition in Hindutva world.
Go-Lakshmi versus Kadak-Lakshmi.
But where is Dhana-Lakshmi, ask economists?
Is she coming, going or asleep? pic.twitter.com/iPbgOsRXC7

His tweet did not go down well with scores of Twitter users, who took him to task for this atrocious tweet. One such user, who goes by the name Misha Patil, said, “So the self claimed writer is now behaving like a paid troll. Yes Mr., when we read your paid tweets, we also tend to wonder where is Yamraj.”

Oh the so called self proclaimed author seems more like paid troll these days. Yes Mr when we read your paid tweets we also tend to ask where is yamraj

At this point, Devdutt completely lost it and indulged in crass language online. He posted, “Chup Chudail, jalti kyon hai? Limbu Mirchi Band Hua Kya?” This post completely revealed Devdutt for who he actually is: a double faced hypocrite who claims to be an expert on Sanatan shastras, but resorts to tomfoolery on being challenged.

However, this was not his first such tweet. For the past few days, Devdutt has been intentionally posting such tweets, which have a common aim – Insult the followers of Sanatan Dharma and provoke them. When one social media user criticized his hypocritical stance on Sanatan Dharma, Devdutt posted such a tweet that would put even the lowly left liberal trolls to shame –

You love tearing . So much suppressed violence. abused as a child ?

This is not all. When one user raised doubts on his understanding of world history, Devdutt shot back, “Go to Sleep stupid boy and apologize to your mother for your birth.” Probably this is why Devdutt is the darling of the left liberal intelligentsia, who come to his rescue on even the slightest of the criticism. If you don’t believe us, see this for yourself –

In this tweet, Devdutt was tweeting nonsense about Sanatan Dharma as usual. When one user objected to the same, lyricist Javed Akhtar came to the rescue of Devdutt Pattnaik, as he posted the following –

Their is no religion in the world that is fair to women and treats them at par with the men . It is beyond my understanding why educated and informed women follow such set of beliefs which are actually biased against them .

Through these tweets, Javed Akhtar not only supported Devdutt’s obnoxious lies on women not being allowed in temples, but also gave an illogical statement to support his argument. Before this, Devdutt had come to Romila Thapar’s rescue with a ridiculous tweet –

She is referring to Yudhisthira as a ‘character in an epic’ composed 2000 years ago who is traumatised by war. With a historical figure Ashoka who ‘wrote edicts’ 2300 years ago proclaiming his remorse. Chill https://t.co/weVkbEq4mT

In this tweet, Devdutt writes, “She is referring to Yudhisthira as a ‘character in an epic’ composed 2000 years ago who is traumatised by war. With a historical figure Ashoka who ‘wrote edicts’ 2300 years ago proclaiming his remorse. Chill.”

This is not all. Devdutt Pattnaik has focused less on Sanatan Dharma, and indulged more in insulting the customs of the same. He did not even spare the Indian history. When some users objected to his rants on Padmaavat, Devdutt had this to say about the Sanatan culture –

Some women believe death is better than rape. Really?
Surviving and thriving despite violent monsters is not an option? Really?
This is how we support patriarchy. https://t.co/ZU9kQsedmq 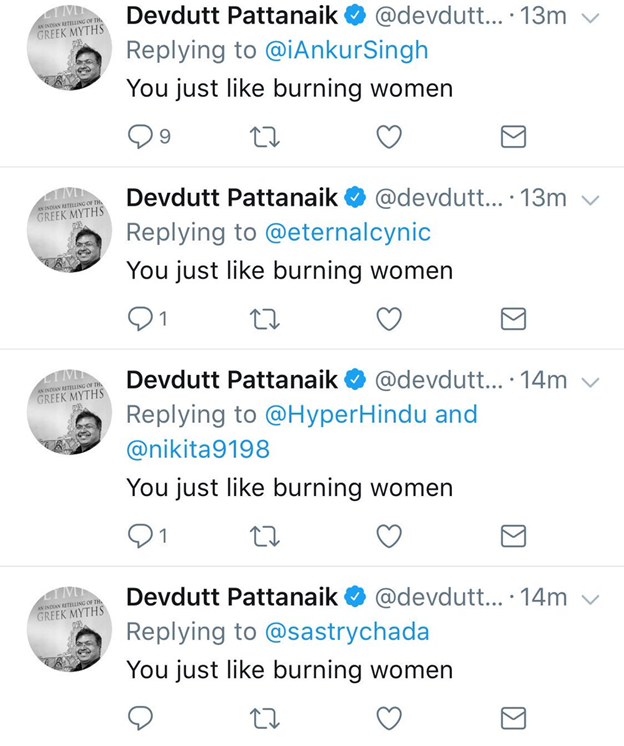 How tolerant Devdutt has been to alternative narratives can be proved by his showdown with Nityanand Mishra. When he exposed the fallacies of Devdutt Pattnaik’s creations, Devdutt had another meltdown of sorts, as he began ranting about the entire Brahman community on Twitter.

Pattanaik, clearly a leftist, more so a socialist, tries to fit all Indian historical events and cultural practices along the lines of the Left worldview. His interpretations of the Ramayana, Mahabharata, among others have found no buyers among those who have genuine knowledge of the Indian culture. As a result, Pattanaik, being the marketing genius he is, started writing books for children. Of course, for those who are not aware of the subject at-hand, Devdutt has the incredible ability to make people subscribe and believe his interpretations. Through his various children-specific book series, Devdutt leaves no stone unturned to ensure that the reader is indoctrinated with bogus ideas about Indian culture and more so, grows an affinity towards Leftism.

Not only is Devdutt Pattnaik a flawed Indologist with questionable credentials and perhaps ulterior motives, but also, he is a gutter-level troll, as proved by his recent tweet in which he, in reply to a genuine question, told the person concerned that he would ‘Check with your Mother’.

I will check with . your mother

This is not the kind of language used by this ‘mythologist’ once in a blue moon. In fact, such abusive language can be seen being hurled upon anybody who disagrees with Devdutt. Surely, anybody who has the slightest knowledge of Indian ethos would not malign somebody’s mother simply because the person refused to comply with the former’s ideology, or for simply asking a question.

Devdutt Pattanaik has created a mish mash of half baked knowledge on Sanatan Dharma, coupled with his limited knowledge of Sanskrit through the help of modern software. He is slowly falling into the very trap he created for the followers of Sanatan Dharma. The way he has been responding to the criticism he has received for his recent tweets, it seems that Devdutt needs a proper mental checkup more than anything else.

AK Sharma, PM Modi’s loyalist is in UP to help Yogi Adityanath win the 2022 election