In a big blow to the historians still reeling from a colonial hangover, a DNA study on skeletons found in Rakhigarhi has found no traces of the Aryan gene, wrecking the basis of the Aryan Invasion Theory. Rakhigarhi, is a village in Hisar District in the state of Haryana in India is the site of a pre-Indus Valley Civilization settlement going back to millennia. The study — titled ‘An ancient Harappan genome lacks ancestry from Steppe pastoralists or Iranian farmers’, led by archaeologist Vasant Shinde examined remain of Indus Valley Civilisation but found no trace of R1a1, or the ‘Aryan gene’.

“The population has no detectable ancestry from Steppe pastoralists or from Anatolian and Iranian farmers, suggesting farming in South Asia arose from local foragers rather than from large-scale migration from the West,” said the study.

“These individuals (in Rakhigarhi) had little of any Steppe pastoralist-derived ancestry, showing that it was not ubiquitous in north-west South Asia during the IVC as it is today,” it added. 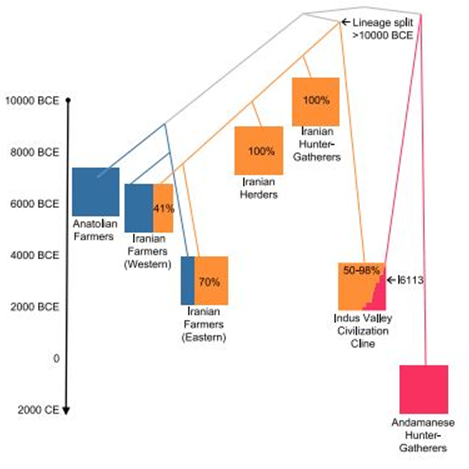 The 18 page study report, written by Vasant Shinde, Vagheesh M. Narasimhan, Nadin Rohland destroys once and for all, the contentious Aryan Invasion theory.

The Aryan Invasion Theory was peddled by colonial rulers of Britain to justify the sovereignty of Britain over the native population.

Sanjeev Sanyal-historian and author, in series of tweets said that the evidences suggest that Aryan Invasion theory is false but it also establishes that Indians are mixed people, and back and forth movement from central Asia and Southeast took place.  “Let it be clear, the DNA and archaeology also shows that India was not some pristine “Aryan” homeland. Indians were a mixed people from the beginning and the link to Iranians is very deep and predates Bronze Age,” tweeted Sanyal.

Let it be clear, the DNA and archaeology also shows that India was not some pristine "Aryan" homeland. Indians were a mixed people from the beginning and the link to Iranians is very deep and predates Bronze Age. 1/n https://t.co/1hzfHa5K0S

Dr Niraj Rai, genetic researcher headed the study with Shinde also agreed with back and forth movement. “There is a difference between migration and movement. There was certainly some mixing and assimilation, but we can’t call that an invasion,” he said.

The Aryan Invasion Theory asserted that Vedic culture and practices were of a foreign origin, which was supposedly enforced upon the indigenous populations of the Indian subcontinent by a fairer or light skinned group of people that invaded the mainland and pushed the local population down south. The theory was promoted to help the British suppress Indian nativist ideology or a sense of common identity, further assisting them in their larger ‘divide and rule’ policy.

The same theory has been promulgated by several historians from India, who have labelled Vedic practices as a foreign introduction into the Indian subcontinent. The latest findings are a huge blow to the Aryan Invasion Theory and suggest that Vedic practices evolved more or less from local indigenous people rather than a ‘foreign invading tribe’.

The theory has also been used in modern times by political parties in southern India to create a North vs South divide, referring to the apparent original inhabitants of the land as Dravidians and the foreign North Indians as Aryans. This had helped parties like DMK and AIADMK in furthering their xenophobic and regionalist political rhetoric in the decades following Independence.

Nonetheless, while the Aryan Invasion Theory can be put to rest, the Rakhigarhi study still hasn’t answered the larger question of what exactly happened to the Indus Valley Civilisation. Lack of damage to buildings, skeletons and archaeological sites indicate that war was not the cause of the displacement of population.

One of the suggested theories is that there was a shift in the course of the Indus river, which made agriculture and livelihood difficult in the basin area. However, the fact that almost all personal and household items, including food grains were abandoned as the population migrated still poses relatively unanswered questions as to the fate of the Indus Valley Civilisation.

A part of a project fails, a nation of 1.3 Billion learns. What last night means for future generation of scientists