Soon, it will rain houses

by Amit Agrahari
in Finance
0

The finance ministry announced major cuts to make the Indian corporate tax competitive among Asian economies. Currently, the corporate tax rate for established units is 22 per cent (without exemption) and 15 per cent for new manufacturing units. The low interest coupled with “loan melas” is expected to revive the demand. 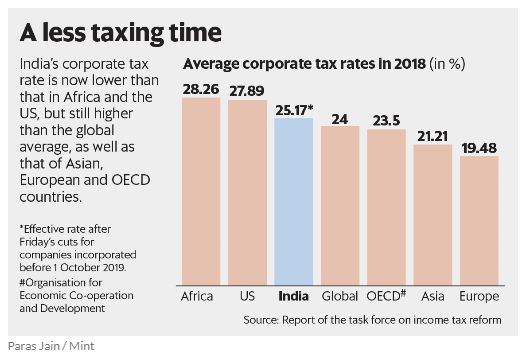 The government used the cyclical slowdown as an opportunity to bring structural reform.

So, the question is what is the government doing to spur the demand that is going to solve the short term cyclical slowdown.

The government has directed the public sector banks to organize “loan melas” in 400 districts within a month. The exercise will start from October 3, a few weeks before the start of the festive season, when people are on buying spree.

The banks will give loans to retail borrowers as well as to Non-Banking Financial Service companies (NBFCs). The NBFCs are major retail creditors, especially in rural areas. The recent slump in rural consumption is primarily triggered due to NBFC crisis, and therefore pumping money in rural creditors is important to push the demand.

“PSBs will focus on giving loans to the ‘RAM’ category — retail, agriculture and MSMEs,” said Sitharaman in a press brief after a meeting with heads of PSBs.

The finance minister also announced that the banks will not announce any NPAs for MSME loans till March 2020.

The Repo rate has witnessed a substantial reduction in the last few months. The rates were brought down from 8 per cent at the time of Raghuram Rajan era to 5.4 per cent, as of the last bi-monthly meeting of Monetary Policy Committee.

The next MPC meeting, which is scheduled in the first week of October, is expected to give another 25 basis points cut to policy rates.

The lending rates in India are still not comparable to other developing economies, which have rates in the range of 2-4 per cent. But it is lower than the set standards of inflation hawks like Raghuram Rajan and Urjit Patel.

However, the ‘rate transmission’ is poor, as the banks have set the loan rates for home and automobile at, 8-9 per cent. To ensure better transmission of the low policy rate, the finance ministry has asked the banks to link retail loans to the repo rate.

Consumption, especially private consumption drives the Indian economy as it constitutes 55-60 per cent of the country’s annual output. Therefore, the revival of demand is necessary to bring back the ‘animal spirits of the economy’ and counter-cyclical slowdown.

Erdogan toes Pakistan line on Kashmir, dreams of a neo-Ottoman Caliphate with himself as the Khalifa