The reasoning and math behind RBI’s Rs 1.76 trillion surplus transfer to government 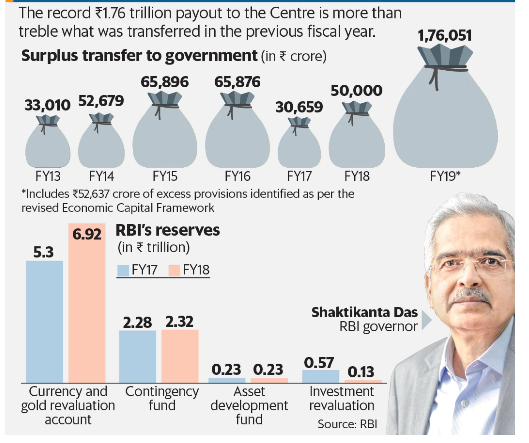 As per the RBI statement, the transfer includes Rs. 1.23 trillion of surplus for 2018-19 and Rs. 52,637 crore of excess provisions identified as per the revised Economic Capital Framework (ECF) adopted at the meeting.

The expert panel headed by former RBI governor Bimal Jalan suggested transfer of a portion of the RBI’s reserves to the central government in a period of three-five years. 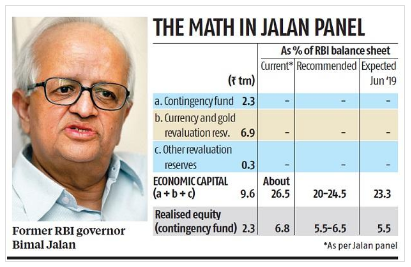 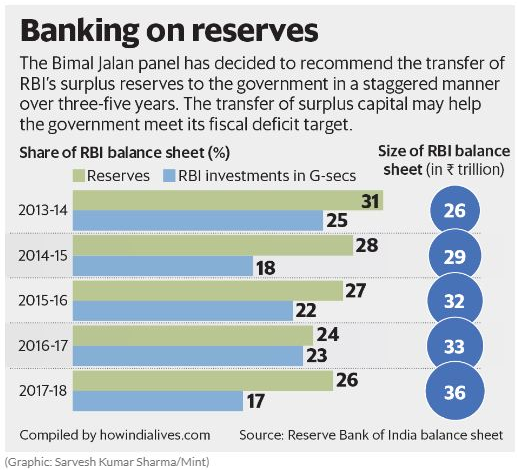 Previously, former Chief Economic Advisor to the Government of India, Arvind Subramanian had argued that RBI holds an excess reserve of 5.7-7.9 lakh crore rupees. In a paper published in India’s premiere journal Economic and Political Weekly (EPW), Subramanian reasoned that “The RBI has an unusually high level of capital. If the choices made by other central banks are used as a benchmark, the RBI appears to have a minimum of Rs 5 lakh crore in excess capital.” The paper was titled as ‘Paranoia or Prudence? How much capital is enough for the RBI?’

The research paper suggested that alternative analysis could suggest even greater excess reserve. “An alternative cross-country econometric analysis suggests that the excess capital is even greater, between Rs 5.7 lakh crore and Rs 7.9 lakh crore,” read the paper. The paper argued that RBI’s capital to assets ratio is substantially higher in comparison to central banks across the world. The global media for a central bank’s capital to asset ratio is 8.4 percent while RBI has kept 28 percent in its pocket. 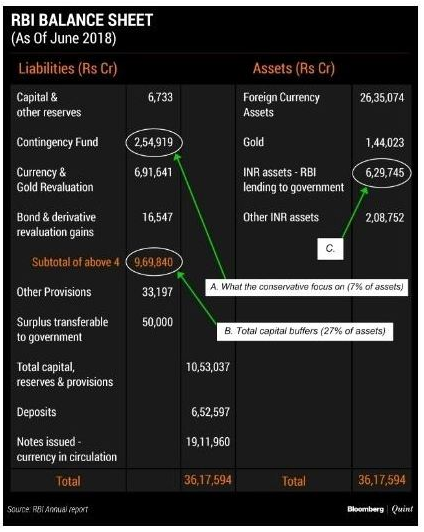 Subramanian was not the first one to argue that the RBI is holding excess capital. Earlier Christopher Wood, chief strategist at the investment group CLSA compared RBI’s holding to Federal Reserve System, the central bank of United States and argued that RBI’s holding is 30 percent in comparison to 1 percent of Fed. “The RBI balance-sheet is as overcapitalized as the [US central bank] Federal Reserve’s is undercapitalized” said Wood.

Rahul Gandhi, the Congress dynast who has no clue about macro economy criticized Modi government over the move. “PM & FM are clueless about how to solve their self created economic disaster. Stealing from RBI won’t work – it’s like stealing a Band-Aid from the dispensary & sticking it on a gunshot wound,” tweeted Gandhi.

PM & FM are clueless about how to solve their self created economic disaster.

Stealing from RBI won’t work – it’s like stealing a Band-Aid from the dispensary & sticking it on a gunshot wound. #RBILooted https://t.co/P7vEzWvTY3

The non-budgeted transfer of 86,000 crore rupees is a bonanza for the Modi government. The money could be used to recapitalize the ailing public sector banks, to bridge the slippage in fiscal deficit or fiscal stimulus to the economy. RBI should have transferred the surplus reserves to the government a few years ago but the excessively conservative approach of previous RBI governors- Raghuram Rajan and Urjit Patel delayed the transfer.

Is it the scrapping of Article 370 effect in Bollywood? Movie on Kashmiri Queen Kota Rani suggests so

Liberal Media portals lose their minds over NRC, compare the exercise with ‘The Holocaust’

Even after embarrassing India at the Oscars, Gully Boy remains most favorite of povertarian Filmfare jury

“Tell that to your boss,” Smita Prakash trolls Samajwadi Party politician who called for ANI boycott

“My net worth is zero”, Once a flamboyant billionaire, Anil Ambani reveals his sad story