As Pakistan is left red faced after the international community snubbed Pakistan’s efforts to internationalize the Jammu and Kashmir issue, Pakistan is fast running out of options to soothe out the internal anti-India uproar in radical infested regions. In dearth of options to counter India, misinformation campaigns coordinated by Pakistani military establishment against India have been surely further accelerated after India’s move to enforce Indian Constitution in Jammu and Kashmir in full spirit.

Joining these efforts of Pakistani military establishment have been several international media organizations and also the pseudo-liberal media nexus in India. A number of similar meek attempts to malign India’s action in the UT of Jammu and Kashmir have surfaced and have been proactively used by Pakistani establishment to push their anti India narrative.

Leading the international media is British Broadcasting Corporation or the BBC which has been called out a number of times for its skewed and controversial reporting on sensitive issues has been putting out such reports which are factually incorrect and overtly misleading. In a similar ‘exclusive video’ released by the BBC it had claimed the Indian security forces had fired on protesters. However ground situation was totally contrary to what BBC had projected, as a matter of fact verified official reports had clearly dismissed any incident of firing and also refuted the claims of large scale protests in the region.

SP Pani , IGP Kashmir had also refuted these media reports and conclusively laid out the ground realities and said “This is to clarify some international media reports regarding firing incidents in the valley, they are wrong, no such incident has taken place. Valley has remained largely peaceful over last 1 week”

#WATCH SP Pani, IGP Kashmir denies media reports of police firing in Kashmir says,"This is to clarify some international media reports regarding firing incidents in the valley,they are wrong, no such incident has taken place. Valley has remained largely peaceful over last 1 week" pic.twitter.com/aF0SSMoIG2

If @BBCNews considers #ZakirMusa fanboys representative of Kashmir, then it clearly has no idea what’s going in this part of the world. Shame on BBC for running al-Qaida propaganda in Indian Kashmir. PM @narendramodi @DrSJaishankar must take it up with @BorisJohnson Johnson govt. https://t.co/wFv1McJych

Along with BBC, several other media organizations; Reuters, Dawn and others have also been called out on similar reports on the issue.

Spokesperson of the Ministry of Home Affairs had also refuted reports by these organizations and said “A news report originally published in Reuters and appeared in Dawn claims there was a protest involving 10000 people in Srinagar. This is completely fabricated & incorrect. There have been a few stray protests in Srinagar/Baramulla and none involved a crowd of more than 20 ppl.”

Earlier the ruling party in Pakistan, PTI had tweeted a video clip from The Wire, claiming “While the world enjoys #LIVNOR, a Kashmiri mother mourns whose was shot from a pellet gun, a youngster full of dreams loses his sight, an elderly man in a hospital requests at least phones to be operational. Know them, raise voice for them, help them! #SaveKashmireFromModi”

While the world enjoys #LIVNOR, a Kashmiri mother mourns whose was shot from a pellet gun, a youngster full of dreams loses his sight, an elderly man in a hospital requests at least phones to be operational. Know them, raise voice for them, help them!#SaveKashmireFromModi pic.twitter.com/kdYSUVrcEf

In the said video The Wire Founder Siddharth Varadarajan claims to be interacting with patients at the government operated Sri Maharaj Hari Singh hospital in Srinagar, while the report is clearly skewed and only meekly employs hedged arguments to malign the security preparations in the two union territories, Pakistani deep state has been making the most out of these half baked reports to its advantage in the anti-India front. Nonetheless if the lopsided narrative is being used by a foreign aggressor against Indian national interest, it surely raises sharp questions around the intent of these reports.

The Wire in the past has also been called out for its highly divisive and objectively poor reports on several issues, with most of the reports and opinion pieces mostly amounting to just blatant fear-mongering and clear disconnect with ground realities. Nonetheless looking at the trend it is not surprising that enemies of the nation have picked up these reports to justify and propagate their anti India agenda.

Specifically related to legislative developments in the two union territories of Jammu and Kashmir and Ladakh, these vacuous reports by The Wire and also other organizations have not only been highly misleading but also reek of sinister intents. Moreover, The Wire was also accused of peddling rumors that the stock of essential life saving medicines was depleting fast. It was another matter that the propaganda was busted within hours of the articles being published.

Statements issued by the Editors Guild of India were also propagated in Pakistan through several media and official channels. In the statement Editors Guild had called the security preparations in the two newly created Union territories as “almost total and draconian”. Pakistani media had also cited Indian Editors Guild for their propaganda against India in their propaganda news.

While these statements are clearly skewed and only meekly employs hedged arguments to malign the security preparations in the two union territories, Pakistani deep state has been making the most out of these ‘concerns’  to its advantage in the anti-India front.

Interestingly, ultra left activists like Kavitha Krishnan and Jean Dreze tried their level best to peddle their propaganda through a bogus press conference on the alleged atrocities, only to be stopped by the Press Club of India, who thoroughly criticized them for the same.

We are, as far as we know, the only ones to go out of Srinagar to check on the #Kashmir situation since 5 Aug. Do come to listen to our first hand report. https://t.co/OpppMS6oxa

Recently, the Indian Army slammed left-liberal activist Shehla Rashid for her misleading tweet about the situation in Kashmir. Shehla Rashid, whose nascent political career ended up in tatters after Article 370 abrogation, had alleged in a tweet that Indian security forces have been ‘torturing’ Kashmiris and has also alleged that the security forces have been mistreating Kashmiri families. The Indian Army hit back at her calling the allegations baseless. ANI quoted the Indian Army saying, “Allegations levelled by Shehla Rashid are baseless and rejected. Such unverified & fake news are spread by inimical elements and organisations to incite unsuspecting population.”

Earlier the Pakistani establishment had used a video by NDTV, another controversial media outlet, to further propagate and justify their hate against India. However NDTV in a surprising and shocking move came out and tried to distance itself away from the misleading use of the dangerously misleading report.

For all those in New Delhi living in the delusion that Kashmir is happy over the scrapping of Article 370, union of J&K territory, an old Kashmiri has a msg:
“Lift the curfew for a day and we’ll let them know how happy we [Kashmiris] are”.
Can Modi do that?#SaveKashmirFromModi pic.twitter.com/qJZZpTcmN7

Several pseudo-liberals have also been indulging in spreading unverified information, which is ultimately being used by Pakistani propaganda machineries to churn anti-India sentiment.

A video had also surfaced in which the former Pakistani High Commissioner to India Abdul Basit, in which he made shocking revelations around how Pakistani establishment had approached Indian journalists to put out reports which were ultimately aimed to favor Pakistan against India.

In the video the former Pakistani bureaucrat, allegedly named journalist Shobhaa De and outlined Pakistan’s approach towards Indian journalist. He says, “One of the challenges we had faced was how to find a journalist who can be convinced to write a good article on behalf of us, advocating a plebiscite in Kashmir. Then we found a lady, Shobha De…”

Moreover it is highly unlikely that only one or a few Indian and international journalists were approached by the Pakistani establishment, which ultimately translates to a deep network of journalists in India who have worked on Pakistani motivation possibly even on a pay roll to present a Pakistani favorable view in the Indian media regarding Kashmir.

Another controversial journalist Barkha Dutt was also called out for her misleading reporting on Kashmir. In her blatant, biased coverage Barkha Dutt claimed that she met the person in question, Idrees ul Haq by co-incidence and proceeded to share his and his family’s sob story. According to Barkha Dutt, the Idrees, working in Pune was extremely worried for his diabetic mother in Kashmir and sent a video to Barkha Dutt seeking help. Barkha Dutt put up this video on Twitter. Later, on her ‘coverage’ of Kashmir, Barkha Dutt said that she ‘coincidentally’ met ‘the same man’, Idrees ul Haq on her flight to Srinagar, from where she followed him to his home and shared the atrocities the Kashmiris were suffering. Very impromptu and candid.

While all this is well and good, Barkha Dutt’s true coverage has been brought to light by twitter user Bala who had uncovered the real relation between her and Idrees ul Haq.

A further dig by Bala revealed that in fact Barkha Dutt had known the individual in question even in 2012. She was fondly speaking to Idrees ul Haq on twitter in 2012 but in her latest propaganda video on Kashmir she claimed to have only recently known about him.

Another left-liberal journalist, Sagarika Ghose had insinuated that the security forces has been using brutal tactics to clamp down on Kashmiris. 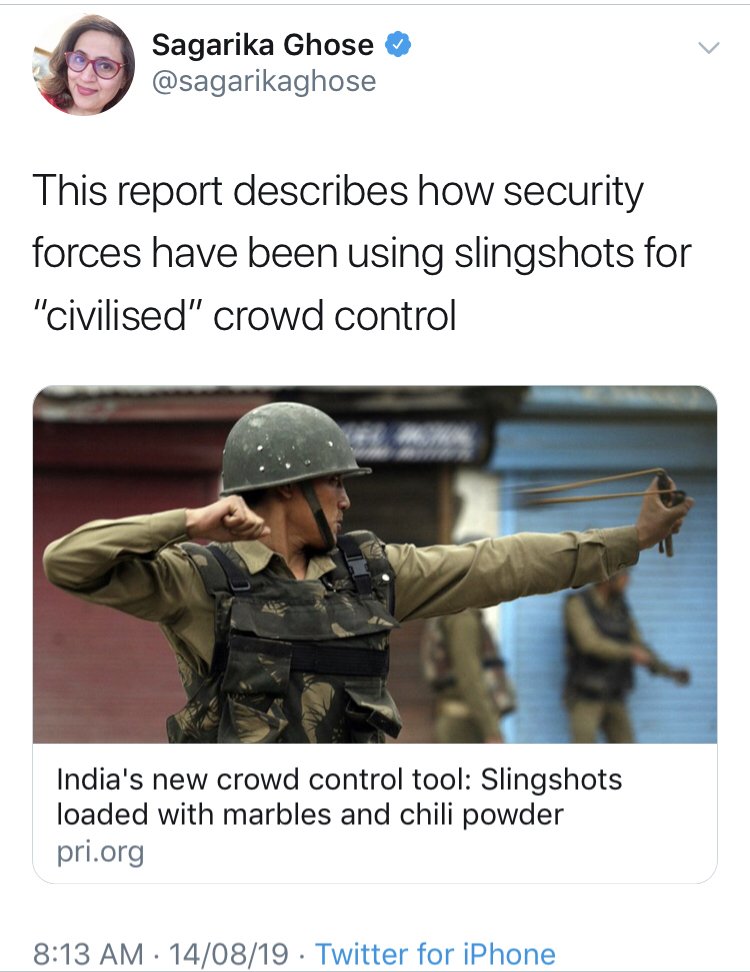 Nonetheless, the fact remains that several media outlets in the past have been called out for their highly divisive and objectively poor reports on several issues, with most of the reports and opinion pieces mostly amounting to just blatant fear-mongering and clear disconnect with ground realities. Looking at the trend and the number of skewed reports, it is not surprising that enemies of the nation have been conveniently picking up these misleading and false reports to justify and propagate their anti India agenda. These meek attempts, with efforts of the authorities and users of social media, are surely not going to go unchecked.

6 Muslim nations have bestowed their top honor on PM Modi. Pakistan stands isolated even in its own world

Meet the vultures making a profit from war, epidemic and natural calamities

Why the death of Tapas Paul, a veteran actor of Bengali cinema, evoked no heartfelt obituaries from people