The online space over recent years has been seeing a huge influx of ambiguous and confusing news information. Some reports though highly delusory, succeed to impinge on the minds of the readers. While convenient molding of facts to suit a certain agenda has been on a continuous rise, simple scrutiny is highly essential to filter out genuine information from agenda driven narratives. Entities earmarked by these reports have also taken a proactive stance in countering claims made by many through legal and other methods. Outright misleading on the part of some politicians raises severe questions on their credibility, and now adding one more to the list, AAP leader Atishi Marlena has been found blatantly lying.

AAP leader Atishi Marlena has been called out for spreading misinformation over Instagram. Atishi had posted on Instagram: 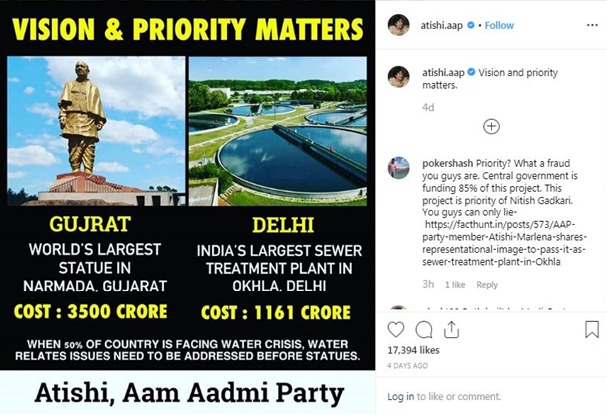 In this post Atishi Marlena tries to draw an equivalence and compares Sardar Patel’s ‘Statue of Unity’ in Gujarat with a supposed sewage treatment plant in Okhala. In the post the cost of construction of both the projects have also been compared. In her post Atishi tries to imply that as the country faces water shortage the Government’s focus stays on the construction of a 3500 crore statue while in Delhi a 1161 crore Water treatment plant is being constructed.

However simple scrutiny of the claims posted by Atishi Marlena reveals a lot of inconsistencies. Fact Hunt, an independent social journalism platform to counter fake news has pointed out a few of these inconsistencies. The image is actually of a sewage treatment plant in California and not in Delhi. Also, Fact Hunt has stated that while the Statue of Unity was completely constructed by 2018, for the Water treatment plant the foundation stone was laid just recently on 8th July by Union Cabinet Minister in Ministry of Jal Shakti, Gajendra Singh Shekhawat and Delhi Chief Minister Arvind Kejriwal.

“..the main aspect that has to be taken into consideration is that the Statue of Unity in Gujarat has already been built, whereas the sewer treatment plant is yet to be built and is still in progress. Moreover, the foundation stone for the plant was laid very recently on July 8, by Union Minister Gajendra Singh Shekhawat and Delhi Chief Minister Arvind Kejriwal. The project is expected to function from 2022.”

The Instagram post also pegs the cost of construction of Statue of Unity at 3500 crore while credible reports peg the cost at around 2990 crore.“The second false aspect of the post is the money used in building the statue. Atishi’s post said that 3500 crores have been used for the construction of the Sardar Patel statue. However, according to reports, the cost for building the statue was 29.9 billion rupees which equal to 2990 crores. Her post is spreading misinformation by claiming that 3500 crores were spent on the statue.”

“Atishi has also added to the caption that ‘Vision and Priority matters’ which criticises the Central government for prioritizing the statue and leashing out funds for that. However, it has to be noted that 85% of the funds for the sewage treatment plant which will take 3 years to complete is being funded by the central government.”

Atishi has also been called out earlier for spreading false propaganda, in the run up to Lok Sabha elections, Atishi and AAP had alleged that Gautam Gambhir had held a campaign rally without permission. Atishi even had complained to the returning officer and had requested the election officials to file an FIR against Gambhir along with barring him from campaigning for 72 hours. However in a shock to AAP and Atishi Marlena, the returning officer K Mahesh said permission had been granted to the BJP candidate for holding road show in several parts of east Delhi, including Dilshad Garden — the area mentioned in the AAP complaint. The AAP leader also alleged that famous and reputed cricketer Gautam Gambhir, whom she was contesting against, had spread pamphlets written in bad taste to taint the female leader’s image. The claims made by the leader turned out highly incredulous and highly suspect.

In Delhi, which is considered as the fort of AAP, problems for AAP  are compounded with constant infighting and alienation of popular leaders like Kumar Vishwas from the party while voters are disgruntled. A lack luster performance in the state government and dismal performance in the Lok Sabha polls has also left the party red faced. Involvement in ambition driven politics has adversely affected AAP’s credibility and analyzing the current political scenario and the AAP’s desperate attempts to save political ground by spreading false propaganda, many experts believe the upcoming Delhi assembly elections to be the last election for AAP.

Delhi HC slaps Rs. 50000 fine on a woman who had filed a fake sexual harassment case against her boss