The recently concluded 2019 Lok Sabha elections was the most bitterly fought elections in the history of independent India. Fake news, abuses, derogatory remarks, character assassination was new normal during the election campaign.

The dirty tricks department of the left-liberal cabal left no stone unturned to malign & discredit their principal opposition- BJP. The cabal went to the extent of using the names of apolitical people that too without their permission in order to tarnish the image of their antithesis; during the elections, the Congress ecosystem has spread the fake news with impunity. It is debatable that whether such perfidy has yielded any positive result for the Congress or not, but it has surely pushed many apolitical private citizens into an unwanted dirty political quagmire. “When elephants fight, it is the grass that suffers.”

There are many victims of this game of thrones, the name of one such victim is professor Pratik Kumar of Delhi University; he is a permanent assistant professor in Ramlal Anand college of DU. His name appeared in a letter shared by Congress leader Sam Pitroda where Pitroda had claimed that over 200 DU professors condemned Prime Minister Modi’s ‘Bhrashtachari no. 1‘remark for Rajiv Gandhi.

Statement by over 200 Delhi University Teachers condemning Narendra Modi for his remarks on the late Rajiv Gandhi with actual signatures… Sharing some of them here. pic.twitter.com/OYcPFSbwJc 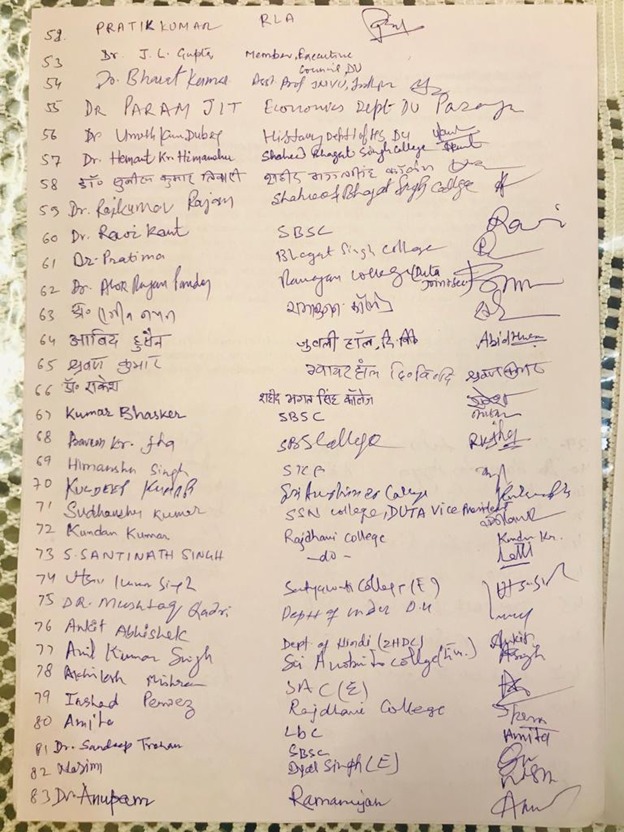 The name of Pratik Kumar appears at number 53 in the list.

First of all, Professor Pratik has said that he had no idea about any such list, and when he came to know about it, he denied signing any such letter and also authored an FB post on May 19 addressing the same issue and demanded an inquiry into the matter. And secondly, the signature in front of his name is also not his genuine signature. Here is Professor Pratik Kumar’s original signature.

Earlier, Professor Vijika & Professor Manoj whose names appeared in the list denied signing any such letter; they both are friends of Professor Pratik Kumar who is doing his Ph.D. from JNU under the guidance of Professor Heeraman Tiwari. The topic of his Ph.D. is ‘Multiple imageries of Bhagwan Krishna.’

BREAKING | Cong’s Sam Pitroda (@Sampitroda) tweets letter claiming it has been signed by 200 Delhi University professors,protesting over comment made by PM Modi on Rajiv Gandhi. @IMohit_Sharma spoke to 2 professors named in the letter, who denied signing it. |#FightOverRajivDare pic.twitter.com/YxdPFdLSik

Elections are over, results are declared, the government is installed, but people like Professor Pratik Mishra have been completely forgotten whose name was used by henchman of the political party to peddle nefarious political agenda against their political opponent. No one is talking about ensuring justice to those who were unnecessarily dragged into the political fight. The guy who did all this is roaming freely. This entire episode has psychologically affected Pratik Kumar very much. He is unable to concentrate on his Ph.D. with the submission date approaching near. Anyone who is associated with academic circle will definitely understand the pain, suffering and condition of Pratik Mishra. 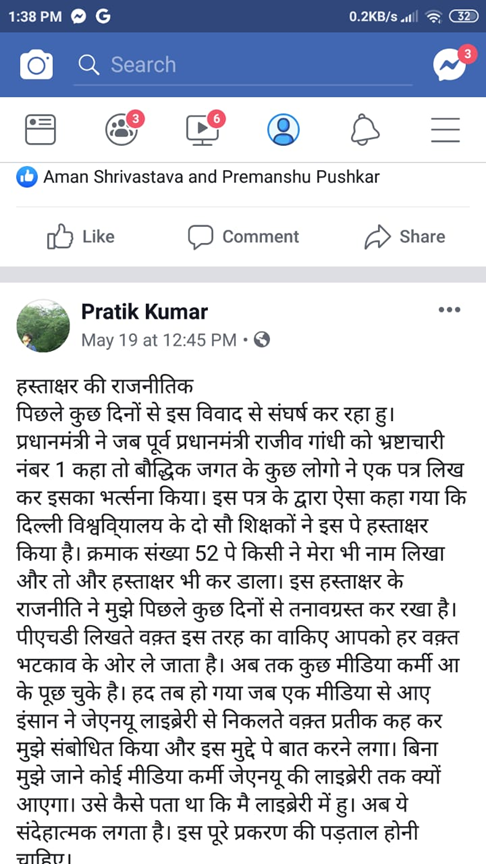 When the elections were in full swing, letters surfaced on media news channels and in newspaper where self-declared intellectuals, army veterans were reportedly appealing to vote against PM Modi. However, just like Professor Pratik Kumar, many signatories have denied signing any such letter and they claimed that their names were misused for political purpose. Political parties need to understand that everything is not fair in order to win an election battle. The end does not justify means.

How India can benefit from the ongoing US-China trade war