No Result
View All Result
Newswire
GMR to raise $300mn through bonds for Hyderabad airport expansion 28 mins ago
Grant of Rs 12,351 cr released for Rural Local Bodies 40 mins ago
Role of AAP in instigating violence exposed: Punjab Cong chief 46 mins ago
Judicial vacancies: SC says incredible pressure when names before Collegium 46 mins ago
Food cooked by Ashok Hotel chefs in Parliament from Budget Session (IANS Special) 46 mins ago
How Janhvi Kapoor reacted to idea of ‘work from home’ 49 mins ago
Next
Prev

The Indian markets love Modi government, the very day BJP won Lok Sabha elections under Narendra Modi’s leadership in 2014, and Sensex rose by 0.9 percent. The investors in the market, whether domestic or foreign, like a stable government therefore when BJP came to power with a full majority the market responded positively. Investor sentiments were so high because, after 25 years of coalition governments, a party finally had a majority of its own. Ever since BJP came to power at the centre, the performance of the stock markets has been directly proportional to the party’s performance in every subsequent state assembly elections because if the same party is in power at centre as well as the state, there is coherence in policies. The reformist agenda of BJP is also responsible for uncanny sync in the performance of BJP and stock markets. And the center of it all is one man – Prime Minister Narendra Modi.

The stock markets respond positively after most of the exit polls announced a comfortable majority for NDA. The poll of exit polls by NDTV gave 302 seats to BJP led NDA, 122 to Congress led UPA, and 119 seats to others. ThePrint, a web portal led by veteran journalist Shekhar Gupta gave 305 seats to NDA, 117 seats to UPA, 16 seats to Mahagathbandhan, and 105 others in poll of exit polls.

The stock markets reached a new high after the exit poll results were announced. Nifty, the benchmark index of National Stock Exchange, rose by 280 points to reach 11,691 while Sensex, the benchmark index of BSE rose by 952 points to reach 38,877.93 in the first hour of trading. The positive sentiment in the market on NDA victory shows the faith of investors in the party.  However, experts suggested taking exit polls with a pinch of salt. “Exit polls have not been accurate for the last three national elections. In 2004, exit polls wrongly forecasted BJP-led NDA coalition winning again, while in 2009, they meaningfully underestimated Congress-led UPA’s seat share. In 2014, while exit polls correctly predicted a BJP-led NDA victory, they significantly underestimated the margin of victory,” said UBS, a Swiss multinational investment bank.

PM Modi has brought the macroeconomic status of the country to a significantly better condition than what he inherited from the previous UPA regime. The fiscal deficit has come down from about 5% of the gross domestic product (GDP) in 2012-13 to 3.5% of GDP in 2017-18. The inflation rate has been brought down to 4 percent from 10 percent in 2012. The GDP growth of the country has been remarkable under the Modi government. The sound macroeconomic conditions will help India to attain PM Modi’s dream of double-digit economic growth.

We analyzed the performance of Sensex with respect to BJP’s performance in state elections that took place after Narendra Modi won the historic 2014 Lok Sabha elections. The numbers present a very interesting story. 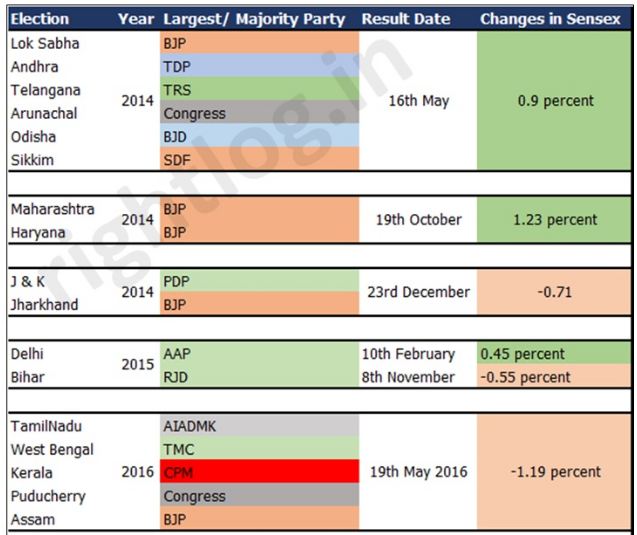 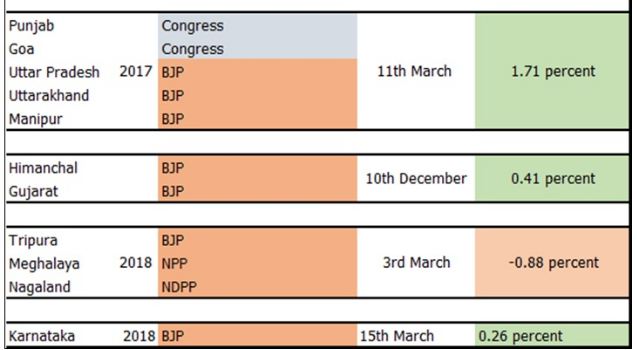 After coming to the center as the prime minister of the country, Narendra Modi took some bold reforms like demonetization, GST, IBC to improve business conditions in the country. The impact of these reforms is visible in the improvement of ease of doing business and healthy economic growth. PM Modi enjoys high trust ratings among international financial institutions like World Bank, IMF, rating agencies like S&P, Moody’s and many others, therefore, the foreign investors are bullish about Indian economy for as long as Narendra Modi is in power.

Exit Polls 2019: Here’s how many seats BJP will win in Punjab, Himachal and other Northern states

Exit Polls 2019: Here’s how many seats BJP will win in Maharashtra, Gujarat and Goa