Exit Polls 2019: Here’s how many seats BJP will win in Maharashtra, Gujarat and Goa

Western India including Maharashtra, Gujarat and Goa have played an instrumental part in the formation of government at the centre with a total of 76 parliamentary constituencies. NDA in the 2014 general elections had secured a comfortable position by securing 69 out of these 76 parliamentary constituencies. This general elections has been seeing similar trends in support for the BJP. The BJP was also successful in retaining power in the state elections in 2017 in Gujarat and Goa coupled with a massive victory in Maharashtra in 2014 which followed the general elections.

Maharashtra with its 48 seats in the Lok Sabha has been an important part in setting up the mathematics for the national stage. NDA’s victory in the 2014 general elections saw an important contribution by BJP winning 23 out of the 24 seats it contested on and its alliance partner Shiv Sena winning 18 out of the 20 seats. The 2014 general elections also saw BJP’s main opposition Congress and the NCP being reduced from 17 and 8 to just 2 and 4 seats respectively. 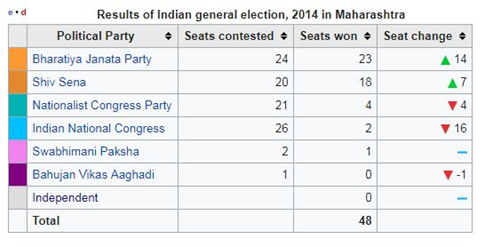 The 2019 general elections has also been witnessing similar trends in favour of the NDA. Senior politicians in Maharashtra seem to have already gauged the winds in favor of the NDA. With tall leaders like Sharad Pawar of the NCP and Prithviraj Chavan of the Congress refusing to contest, the morale of the UPA was an all-time low. This increasing vacuum of leadership in the opposition parties might also lead to a total collapse of the party machinery and ultimately huge electoral losses for the already struggling UPA opposition in Maharashtra. Pre-poll surveys of various organizations have also indicated a positive edge for the NDA. 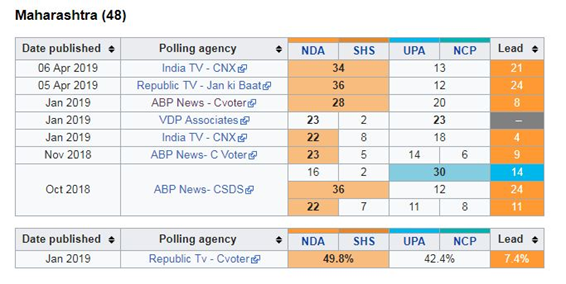 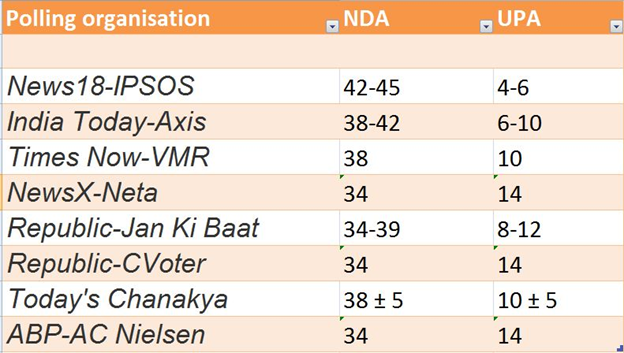 The 2014 general elections in Gujarat saw BJP sweeping the state clean by winning all the 26 parliamentary constituencies. It also saw Congress being reduced having nil representation in the Lok Sabha from a total of 11 seats in 2009 general elections.

Gujarat also saw the BJP retaining power decisively in the closely fought Gujarat Legislative Assembly elections in 2017. Pre-poll surveys of various organizations have also indicated a positive edge for the NDA in 2019. 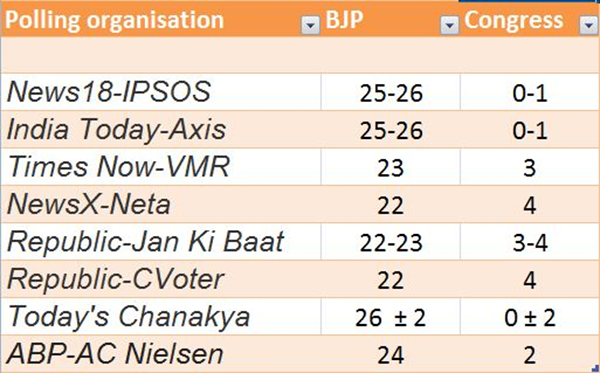 The general elections in Goa has put in front of political parties a different situation as the absence of tall leaders like late Manohar Parrikar is sure to create new dimensions in the state. NDA in 2014 was successful in grabbing both the parliamentary constituencies.

Pre-poll surveys of various organizations have also indicated a positive edge for the NDA.

As the election process ends, exit polls form various survey organizations have also started pouring in, and have indicated towards status-quo to remain.

Exit polls in western states of Gujarat, Maharashtra and Goa surely indicate towards a strong current of support for the NDA in 2019. According to predictions NDA is poised to maintain more or less the same tally in respective states.

Exit Polls 2019: Here’s how many seats BJP will win in Karnataka, Andhra and other Southern states