by Sriramjee Singh
in Analysis
0

Leadership is changing the parliamentary democracy into presidential form; Prime Minister (PM) Narendra Modi inspires me to coin this definition. BJP in its political journey of 35 years has grown tremendously. In its political debut in 1984, the party won 2 seats only. That was an exceptional election, which took place after the assassination of the then PM Indira Gandhi. Congress riding on that emotional wave secured maximum seats (404) and vote share (49.1%) in the Indian political history. Overall, Congress was the natural and largest national party till 2014. It had a presence all over the country. Even in 1996, 1998 and 1999, when BJP got more seats than the Congress, the later had higher vote share due to its pan India presence. It was only in 2014 that the grand old party shrank unprecedentedly and got one-sixth of seats and 12 percentage points (pp) lower vote share vis-à-vis BJP. In 2019, the gap has even increased further with 18 pp vote share. In more than a dozen of states/UTs the party could not even open its account.

This election is very unique in many aspects. After 35 years any incumbent full majority government came again with even bigger mandate. It only happened in 1971. This election witnessed highest ever voter turnout in the history of Indian parliamentary elections. The final voter turnout crossed 67% mark. The states like Madhya Pradesh, Rajasthan and Gujarat observed huge turnouts in this election. Interestingly, female voters exhibited enormous enthusiasm. The gap between turnout of male and female voters has narrowed down significantly from 9% in 2009 to only 0.4% in the 2019 election. In Bihar, the female voters’ turnout is 5 pp higher than the men voters. This is also the election in which BJP contested more seats than Congress since its inception. In this election, people rejected dynasty politics. The election loss of politicians like Rahul Gandhi, Jyotiraditya Scindia, and K. Kavitha conveys a message that only performance matters. The biggest takeaway of the 2019 election is the debacle of SP-BSP-RLD coalition in UP, which was formed only on the basis of caste arithmetic.

After the emergence of BJP, only that the Congress party encounters a challenge at the national level. It would be interesting to see as to how the rise of BJP coincides with the fall of Congress. The saffron party is growing since its formation only with the exceptions of 2004 and 2009 elections. In 2009, Congress got 10 pp more vote share and that resulted in getting 90 seats more than the BJP. However, 2004 was a very close contest. Although Congress got 4 pp more vote share but it had only 7 seats more than the BJP. But, Congress with just 145 seats was able to stitch alliances and surprisingly, UPA-I completed its full term. Finally, Congress learned the art of alliance politics. The advent of BJP created a competitive environment in Indian politics. Also, the space of right, which was virtually vacant for long, got occupied. The inquisitive case of current political scenario persuades me to study the expansion of BJP and its effect on Congress. Election Commission of India (ECI) provides me the data on seats and vote share.

India is multi-party democracy with strong regional parties like AITMC, SP and Dravidian parties. However, the combined vote share of the two major parties (BJP and Congress) has been consistently higher than 50% except 1996 (49.1%), 2004 (48.7%) and 2009 (47.4%). The combined seat share has been significantly higher than 50% over the years. The statistics illustrate the importance of the two parties in Indian politics. The average seats per vote share (conversion) for Congress and BJP over the years are 5.2 and 6.6 respectively. It explains the concentration of vote share for BJP. However, in the last two elections (2014 and 2019), the average conversion for Congress is only 2.5 and that of BJP is 8.5. Also, for the first time in the last two elections, Congress’s vote share went below 20% and BJP breached 30% mark. The figure below shows the vote share (%) and conversion for BJP and Congress over the period of 1984 through 2019. The left axis indicates the vote share for the parties, whereas the right axis displays the conversion. The vote share for BJP shows an upward trend and converse is true for the Congress. The launch of the BJP in 1984 was humble and in the same election, Congress registered its best ever performance. The question arises, is 2019 the best ever for BJP and the worst for Congress? Will BJP continue surging ahead? Could Congress bounce back from here? 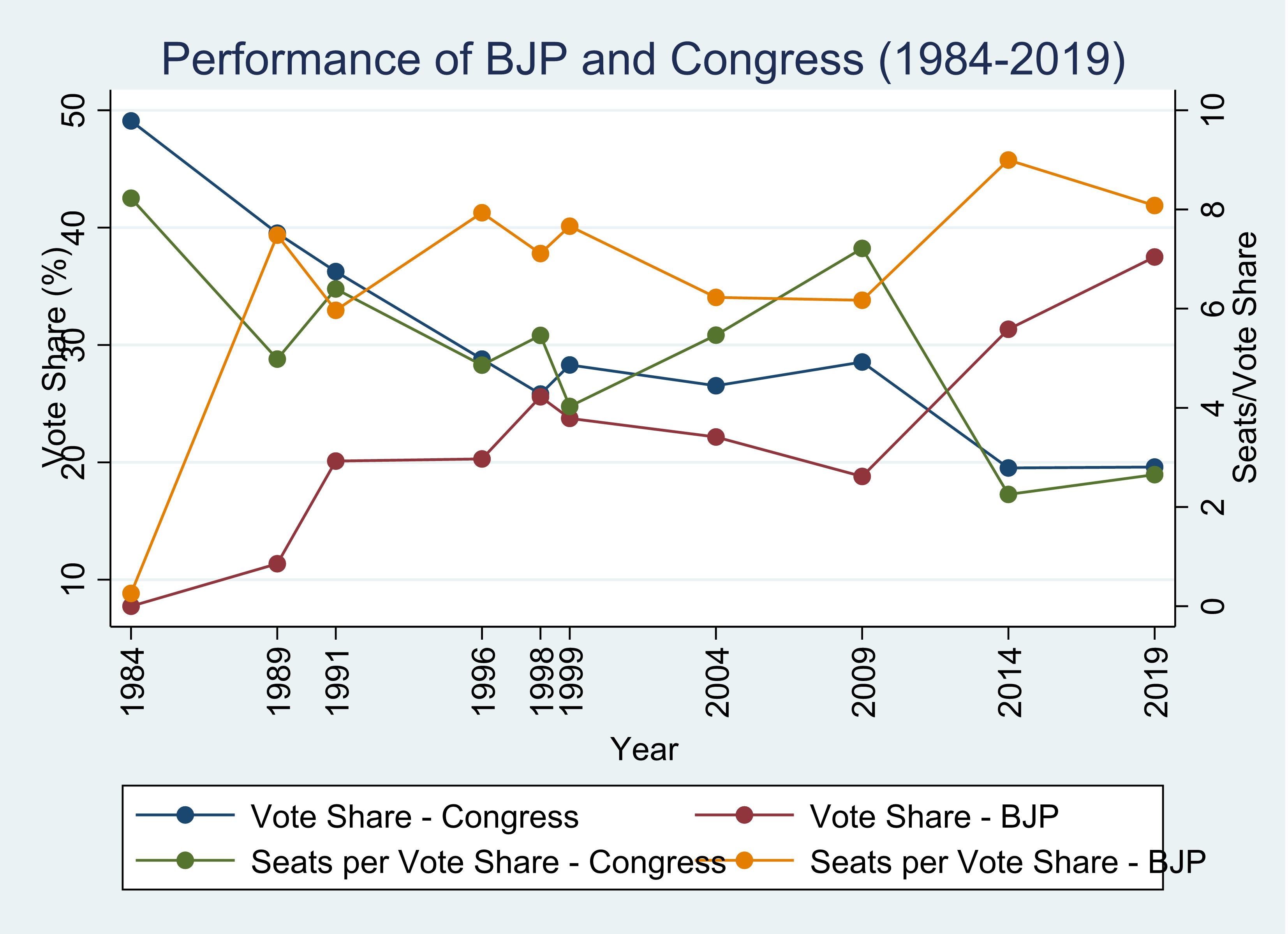 For Congress to revive immediately, it needs to change drastically. There are three important areas, which require urgent correction. First, Rahul Gandhi should improve his communication, he must try to be specific in messaging as well as restore his credibility, which he lost while labeling wild allegations against opponents. Second, Congress needs to build its party structure up to booth level. Third, hard work, there is no substitute for that.

‘You concentrated on saving your dynasty’, Rahul Gandhi attacks Kamal Nath and Chidambaram

The road ahead for BJP in West Bengal