Reliance Industries Ltd, the largest publicly listed and most profitable company in the country made many records in its fourth quarter results. The company has posted 10,362 crore rupees profit in the last quarter given the performance of Reliance Jio and Reliance Retail. The revenue of the company grew to 1.54 lakh crore rupees from the 1.29 lakh crore rupees in the last quarter of FY 19, a 19.4 percent increase. The consumer and retail businesses of the company have registered profit and grown exponentially over the last few years. “Now consumer businesses account for almost 25% of RIL’s Ebitda (earnings before interest, tax, depreciation and amortization)” said Srikanth, Joint Chief Financial Officer. 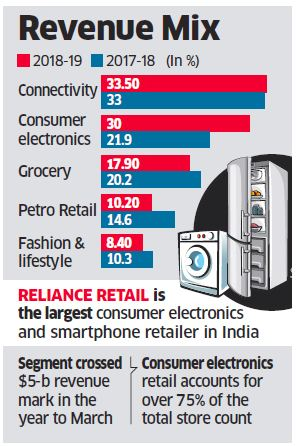 The Reliance Retail grew by 89 percent in the March quarter. The March quarter revenue in the last year was 69,198 crore rupees and grown to 1.31 lakh rupees this year. The profit rose by 168 percent to 5,546 crore rupees from 2,064 crore rupees. In the last fiscal year, the company opened 2,829 stores and for the first time crossed revenue crossed 1 lakh crore rupees. “During FY 2018-19, we achieved several milestones and made significant strides in building Reliance of the future. Reliance Retail crossed ₹100,000 crore revenue milestone, Reliance Jio now serves over 300 million consumers and our petrochemicals business delivered its highest ever earnings,” said Mukesh Ambani, Chairman and Managing Director, Reliance Industries Ltd.

Reliance is all set to enter the e-commerce market to take on Amazon and Walmart. It will enter in the e-commerce market with innovative online-to-offline (O2O) model. It will also explore the untapped rural and small towns market for e-commerce and is expected to be outside of the discounting game. Earlier, the big e-commerce players were involved in a heavy discounting game with exclusive deals from particular retailers who were backed by the platform itself. The small retailers were being pushed out of business through this unethical practice. Reliance is likely to give more importance to these small retailers. The company itself has 4,000 Reliance retail stores and 4,000 Jio outlets which are expected to be scaled up to 10,000 in upcoming months.

According to a report by Nasscom and PwC, the e-commerce market could grow to 150 billion dollars by 2022, riding on rising middle class and surge in the number of internet users. The e-commerce market was estimated to be around 36 billion dollars last year, dominated by Flipkart and Amazon. “A ‘Make-for-India’ solution approach along with conducive policy environment can potentially make e-commerce a $150 billion market by 2022 with a globally leading compounded annualized growth rate of 35%,” said the report. The exponential growth of e-commerce is also expected to create more than 10 lakh jobs in the sector by 2022.

A day we never thought we'd see: Priyanka Chaturvedi vs The Wire and Pallavi Ghosh

‘Rhea overdosed Sushant with drugs and Aaditya is connected to the case,’ Bihar govt makes explosive claim in Court