by Rishi Khemani
in Trending
0

The Award Wapsi gang, which attracted a lot of attention during the first few years of the Modi government’s term, due to unjust and undue resistance toward perfectly normal governance, is going to be happy upon seeing the manifesto put out by the Congress party. The manifesto has many promises that are surely going to help the Award Wapsi ideologues’ sentiments grow into an idea that can finally be assimilated into the policy making process.

The manifesto, which talks about civil society and its role in policy making, clearly hints towards the groundwork being laid by Congress to help the party’s friends get into the governance circles and gain a position of prominence in the decision-making process. This is not something very new from the Congress. The party, when in power, has a liking for the involvement of non-accountable outsiders in the command chain, eventually giving them the power to call the shots. With these people being in such a position, the settings become perfect for the government to shift the blame and play this game when something goes wrong, if and when the Congress party comes to power.

In the Modi government’s five years, the Award Wapsi gang has dropped into the zone of irrelevance, with no one paying any heed to their claims. The Congress, being their sympathizers, has drawn this scheme for their resurrection. When the Congress talks of the National Integration Council and the Interfaith Council, one who’s able to read between the lines would know that this is again a shift of narrative towards pseudo-secularism.This anti-BJP, anti-Modi gang would be brought into the loop for discussion and decisions on matters like communal harmony and communal violence, ways to establish a just society and other related matters. In fact, one can imagine that the National Integration Council would be much like the National Advisory Council (NAC) with Sonia Gandhi at the helm. And who can forget the Communal Violence Bill proposed by the National Advisory Council. The bill defined victims of communalism as a group belonging to “a religious or linguistic minority in any state,or Scheduled Castes and Tribes”. Like the NAC, which left the PMO powerless, the measures suggested by the Congress will undermine the decision-making powers, the discretion and the due process of policy-making exercised by the Constitutional bodies in the present structure. In the past, Mr. Sanjay Baru, ex-PM Manmohan Singh’s media advisor, has mentioned that in the times when NAC used to ‘advise the PMO’, it was not Manmohan Singh who controlled the cabinet.Also, the party talks about creating a framework in which Central and State governments may consult civil society organizations on formulating policies, implementing programmes and obtaining feedback on the carried out action. Knowing well that these civil society organizations are nothing but institutions and individuals close to the Congress, plan laid down by the party aims to engage the Award Wapsi gang in the mainstream, giving them superpowers to maneuver policies in the way of their ideological leanings. 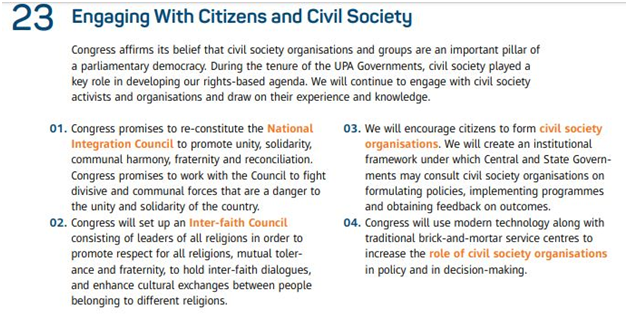 Put simply, the Congress can be imagined as an employment agency which feeds its pawns when it is not in power and rewards them through these institutional posts when it comes to power. Irfan Habib is a perfect example. He’s someone who was rewarded with a lucrative post of Chairman of Indian Council of Historical Research during the late 1980s and is now a Congress loyalist through and through. The Congress plans to deploy such stooges in various positions of importance and authority, only to use them in the long run.

Maken vs Dikshit : Is the alliance with AAP to be or not to be

A keen observer of national politics and everything falling on its left and right. Former associate editor at rightlog.

Hyderabad results must be making the Thackerays super nervous; because they know BMC is next

Diljit Dosanjh had a promising career in Bollywood, but after his “100 100 rupay waali” jibe, he has killed his own career

In a big worry for KCR and Owaisi, BJP puts up a historic performance in Hyderabad