99% of households have toilets now, owing to the Swachh Bharat Mission

There has been a trend in India of Prime Ministers and other top officials not talking about smaller issues like sanitation, mental health and exams. In the 10 years of the UPA government we saw former PM Manmohan Singh deliver speeches from the Red Fort about big policy issues and how to solve them. He could not solve any of these above listed smaller issues is a different matter. PM Modi changed the trend and talked about having an Open Defecation Free India by 2 October 2019, by the 150th birth anniversary of Mahatma Gandhi. The PM delivered on the promise and today more than 99 percent of Indian households have access to toilets.

Under the Swachh Bharat Mission (SBM), the government has been on a toilet building spree and constructed more than 9 crore toilets at the cost of 1.96 lakh crore rupees. India was way behind other poorer countries like Bangladesh, Pakistan and various Sub-Saharan nations in terms of the availability of toilets. As per the data from World Bank, 44 percent of people in the country defecated in the open in 2015. Given the high rates of open defecation, the country has a very poor record on health indicators. Thousands of people faced serious disease every year due to the lack of cleanliness. 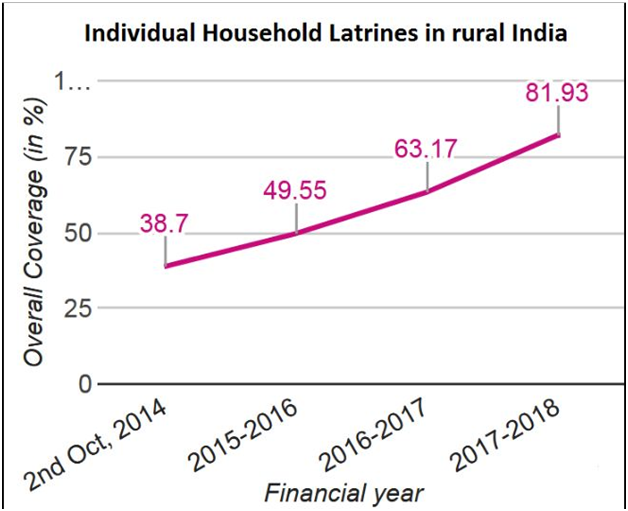 With the launch of Swachh Bharat Mission, the pace of toilet construction doubled in the country due to the efforts of the government. Toilet construction has taken the form of a social revolution because celebrities from Bollywood and sports icons joined the SBM. The World Bank gave a loan of 1.5 billion dollars and technical assistance in the efficient implementation of SBM. The government gives 12,000 rupees to Below Poverty Line (BPL) households for construction of toilets. Modi government allotted 0.5 percent of the budget on toilet construction against the UPA government 0.1 percent. 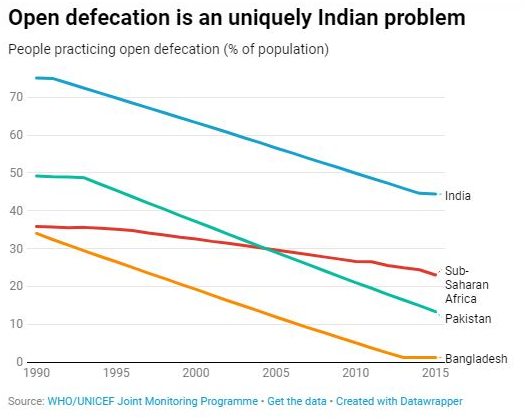 The UPA government also used to give 10,000 rupees for toilet construction under the Nirmal Bharat Mission (NBM). But the problem is that the government does not have a popular leader like PM Modi who changes the opinion of the people or convince them to stand for a cause. Only 40 percent of households had access to toilets in 2014 and the number has reached to 99 percent in 2019 with all but five states are open defecation free. 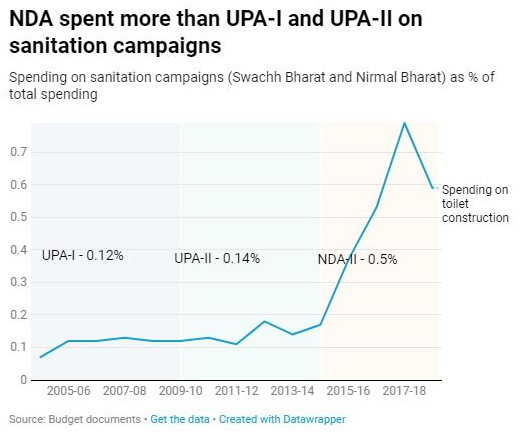 A study carried out by the WHO into health gains emanating out of the Modi government’s flagship program Swachh Bharat Mission (Gramin) concluded that it would result in avoiding more than 3 lakh deaths between 2014 and October 2019. The study was conducted by the WHO at the insistance of the Ministry of Drinking Water and Sanitation (MDWS) in order to make an assessment of the health gains resulting out of the flagship program.

The Swachh Bharat Mission (SBM) has helped the country in reducing the infant mortality rate. According to a report by United Nations Inter-agency Group for Child Mortality Estimation (UNIGME), about 8, 02,000 infants (under 5 years of age) deaths were noted in Indian in the year of 2017. This is the lowest reported number of infant deaths in the last five years. In 2016, 8.67 lakh infants died in the country. Diarrheal deaths which account for more than 8 percent of the total deaths witnessed substantial reduction in last few years due to the Modi government’s SBM. Poor sanitation and the unavailability of safe drinking water is the reason behind 88 percent of childhood diarrhea.

As of now, 3461 cities and 5,52,452 villages have achieved the status of being open defection free. This makes 28 states, 604 districts of India Open Defection Free. The mission has started showing results, and soon we’ll have a country status of 100% open Defecation free, with a clean and hygienic living environment. Along with the exemplary government initiatives, we should all pledge that we’ll contribute and devote time to make India Clean and also encourage other people to do the same.