In last one year, the manufacturing activities in India have grown at a good pace. As per Nikkei Purchasing Managers’ Index survey, the manufacturing Purchasing Managers’ Index (PMI) of India jumped to a 14 month high to 54.3 from 53.9 in the previous month. The interesting finding in the PMI survey is the fact that manufacturing in India grew while it shrunk in other major Asian economies like Japan, South Korea and Taiwan. The PMIs for most of the Asian economies were not encouraging except India. The GDP growth data of the last quarter also gave very optimistic numbers about the performance of the manufacturing sector. 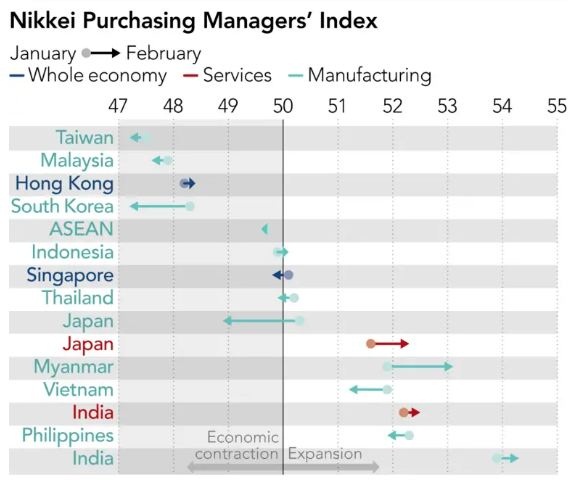 The slowdown in manufacturing in major Asian economies is due to the slump in demand from China. Last year, China accounted for 25% of South Korean exports, 19% of Japan’s, 14% of Indonesia’s and 14% of Singapore. On the other hand, China accounted for very small percentage of Indian exports. For India, major export destinations remained the United States and the UAE where demand is rising given healthy economic growth. “Prospects for [Indian] manufacturers remain bright over the near term,” said Shilan Shah, an economist at Capital Economics.

The positive trends in manufacturing sector may post positive results in GDP growth in the last quarter of this fiscal year. “The survey results suggest that manufacturing will likely provide a stronger contribution to overall economic growth in the final quarter, provided that March’s figures stay on this favourable path,” said Pollyanna De Lima, Principal Economist at IHS Markit and author of the report.

Any PMI number above 50 indicates the expansion in manufacturing activity while a score below this indicates contraction. In the last one and a half year, the score has been above 50 which means manufacturing has witnessed a northward trend under Modi government. Initiatives like ‘Make in India’ have contributed to the surge in activities in this sector. The new orders for products in January this year witnessed a huge surge. The growth in exports also witnessed an upward trend in the last quarter.

The major reason behind improved manufacturing activity in last few years is the consistent efforts of the government. Modi government has worked relentlessly to ease out business processes in the country. When NDA came to power, India ranked 142 out of 189 economies in World Bank’s Ease of Doing Business Report. Prime Minister shared a vision to bring the country amongst top 50 nations in the ranking and worked consistently in the last four years to achieve the goal. The reforms of the last four years resulted in a jump of 65 positions to the 77th rank from 142nd.

Other structural reforms like GST to homogenize the domestic market, Insolvency and Bankruptcy Code (IBC) to solve the NPA problem and enhance credit flow also contributed to the surge in the manufacturing sector. Given the rise in the manufacturing sector, the problem of unemployment is also set to be solved. Employment for unskilled and semi-skilled workers has been a problem for the country for decades. Previous governments just made populist promises but never tried to solve structural deficiencies in the economy. Modi government in its very first year launched ‘Make in India’ scheme to make the country a manufacturing hub and finally, the policies have started paying off.

Cracker ban and much more, Vice President Naidu opines that Judicial overreach needs to be curtailed

In its bid to maintain the monopoly of allopathy, IMA is undermining Ayurveda despite its effectiveness