Last month, the Samajwadi Party (SP) chief Akhilesh Yadav and Bahujan Samaj Party (BSP) president Mayawati officially announced that she would bury the hatchet and join hands with other parties to defeat the common enemy – BJP. Once bitter rivals, the SP-BSP have joined hands to challenge the might of the BJP and also to save their existence in the state where they have enjoyed political power on various occasions and between different time periods. The SP-BSP announced it would contest on 38 seats each while leaving two for its other allies. There are speculations that Ajit Singh’s RLD will be getting those two seats as part of this grand alliance.

The SP controls the Yadav vote bank and the BSP enjoys the support of Jatav voters. The SP-BSP grand alliance is hoping for a smooth transfer of votes of their respective support base. Yadavs constitute 8 percent of the state’s population and Jatav voters’ form 9 percent. 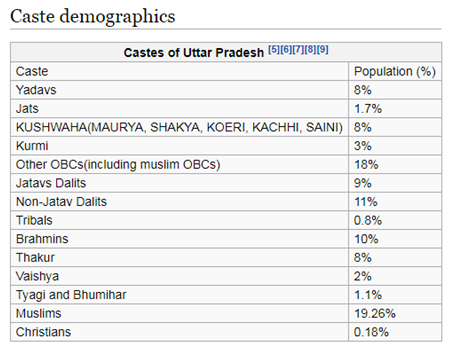 While a politically marginalized community such as the Jatavs’ is more than likely to toe the line Mayawati tells them to, this is not the case with the land-owning, financially secure Yadavs. Although, the BJP has made a significant dent Mayawati’s non-Dalit vote bank, a significant portion of Jatav Dalits still religiously follows Mayawati. New Dalit leaders have emerged in the state such as Chandrasekhar Azad, but so far they have shown no signs that they would contest in the upcoming Lok Sabha elections. It leaves, Mayawati as the sole stalwart Dalit leader in the state with the significant grip over Jatav Dalit voters.

In the case of Yadav voters, there is confusion especially after Mulayam Singh Yadav’s recent endorsement of a second term for PM Modi and his criticism of Akhilesh Yadav over the alliance forged by him. Mulayam is considered as ‘Dharti-Putra’ and enjoys great followership among the older generations of Yadavs and the loyal supporters of the SP. The old party loyalists are likely to follow Mulayam than Akhilesh.

There are more factors now in the mix than there were in 2014 and 2017. Recently, Akhilesh Yadav’s uncle and influential figure in the politics of Uttar Pradesh- Shivpal Yadav- formed his own party- Pragatisheel Samajwadi Party (Lohia).  It is important to note that Akhilesh has been the face of the party for the last 7 years, but it is Shivpal Yadav who has the cadres and the organizational strength. Shivpal is a crowd magnet and enjoys a good reputation among old loyalists of the Samajwadi party. With his exit, the SP seems to have become weaker. In seats that the BSP contests, if Shivpal puts up a strong Yadav candidate, the entire SP machinery in that area will gravitate to him, as will the Yadav votes.

As far the young generations of Yadavs are concerned, they belong to the same educated, politically aware, aspirational generation as the rest of the youth voters and they are not likely to follow political party’s diktat in the face of an opportunistic alliance. They want employment, education and development, and not an immature casteist leader. They would go for a leader who could fulfill their aspirations and take nation’s agenda forward.

The SP-BSP coalition may look viable at the leadership level but at the cadre level, it is a formula for disaster. They lack a Nitish Kumar like figure to ensure vote transfer like it happened in Bihar. And it’s an open secret that all is not well between Dalits and Yadavs. There exists a traditional rivalry between both the communities and hence a seamless vote transfer in 2019 is just a remote possibility and the chances of huge cross voting are very high.

The unprecedented success of Mann ki Baat, a unique initiative by PM Modi