The rise of the right-wing across the globe forced the left-liberal intellectuals to come up with some new terminology to justify it. Therefore the left-liberal academics and intellectuals coined the term ‘post-truth politics’ for the rise of the right.  According to Wikipedia, ‘Post-truth politics’ is a political culture in which debate is framed largely by appeals to emotion disconnected from the details of policy, and by the repeated assertion of talking points to which factual rebuttals are ignored. Although the left-liberals invented the term for the right wing, the Indian left gave best examples of this through the coverage of the Rafale deal.

The opposition and media created a scam out of nothing through repeated lies. Media organizations like ‘The Hindu’ published false and fabricated reports on the Rafale deal. They cropped and photoshopped the official documents of the Defense ministry to prove their points but when the lie was caught, the media organization justified it in the name of public spirited journalism. The Hindu published three articles titled ‘Defense Ministry protested against PMO undermining Rafale negotiations’,  ‘Government waived anti-corruption clauses in Rafale deal’, and ‘Rafale deal not on ‘better terms’ than UPA-era offer’ on February 8, 11 and 13 respectively. All these articles used the photoshopped and cropped images of official documents from the Defense ministry.

Later, the news agency ANI published a copy of the original documents which exposed the fact that ‘The Hindu’ published doctored images to strengthen its propaganda. Defense Analyst, Abhijit Iyer Mitra also pointed out the inaccuracies in the articles by the Hindu, “I have to register my STRONG PROTEST with @the_hindu. It’s one thing having an editorial line but cropping out photos to avoid inconvenient facts like here where @manoharparrikar clearly instructs the DS MoD to coordinate with PMO (courtesy @ANI) is BLATANTLY UNETHICAL,” tweeted Mitra.

The Hindu published the column ‘Readers Editor’ in which it claimed that the documents accessed by ‘The Hindu’ are not doctored but they are subsequent documents. “The page has only the observation of the officials. There is no numbering or sequencing of opinions. In the note released by the government through ANI, every opinion is numbered, and Mr. Parrikar’s opinion is clearly marked 13, which means it was a subsequent document. The numberings, which are quite conspicuous in the ANI document, prove that The Hindu published both documents without any doctoring,” wrote the newspaper. The newspaper also tried to justify whatever it did in the name of public spirited journalism.

However, the following images prove that the documents published by ‘The Hindu’ were doctored and they were same as those published by ANI.

Image Published by The Hindu: 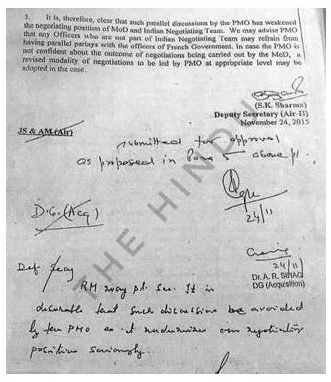 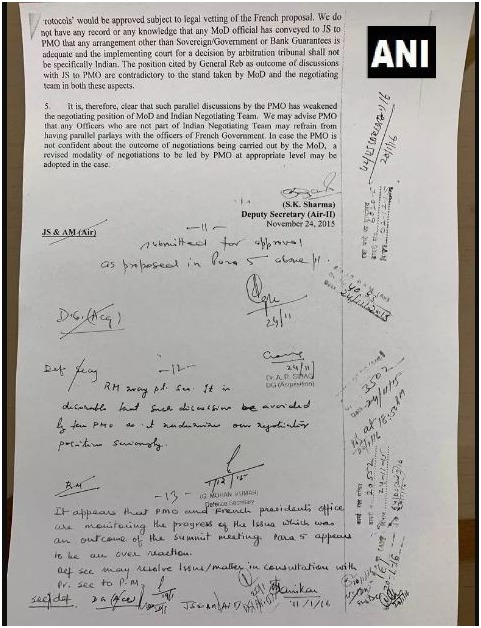 The following twitter thread by AbhijitIyerMitra has information of all the lies, photoshopping, and doctoring by The Hindu. The ‘shoddy journalism’ and ‘agenda peddling’ by N Ram are exposed in the following thread.

1n #Thread on @the_hindu & #Rafale. Thanks Paneerselvam, before i thought it was a case if shoddy journalism, now since you made me do a forensic analysis, I know now that it's a case of ACTIVE & DELIBERATE lying. First up here are the @ANI & @the_hindu images side by side. pic.twitter.com/rLQFgA3XoW

The inconsistencies, fallacies, lack of logic in the argument and outright interference with purported evidence were repeatedly exposed by the concerned authorities.The coverage of Rafale by ‘The Hindu’ is the best example of post-truth politics. This also exposes how the left-liberal media perpetuates the narrative of certain political parties which are on the left side of the political spectrum. The mirage of ‘objectivity’ in media is finally dead and everyone is aware that media organizations clearly take political stands.