In utter nonsense and disgusting way, the liberal media has launched a sustained campaign to shift focus from the Pulwama attack by inventing imaginary attacks on Kashmiris all over India. However, when their brazen attempt has been debunked thoroughly, the flag bearer of liberal media, Barkha Dutt does something that is a fresh low even for her standard.

In order to divert the attention from the heinous attack, these propaganda peddlers pushed a narrative that Kashmiris are being targeted across India. On Saturday, almost simultaneously and in a coordinated manner, multiple mouthpieces of the liberal cabal including Shehla Rashid, Barkha Dutt, and others tweeted about imaginary attacks on Kashmiris. One such tentative incident is the report of ‘gherao’ of a Kashmiri girl’s hostel in Uttarakhand. However, Uttarakhand Police debunked these reports stating that no such incident took place.

In the meantime, Barkha Dutt and other liberal establishment’s mouthpieces carried on with the pretense and shared their numbers to help the ‘Kashmiris under attack’ on social media. No one knows what happened in the backend of the incident; but today, Barkha took to Twitter and uploaded a highly objectionable image which she claimed she had received from a ‘nationalist’ and then without offering any evidence she went on to blame nationalism for the image. 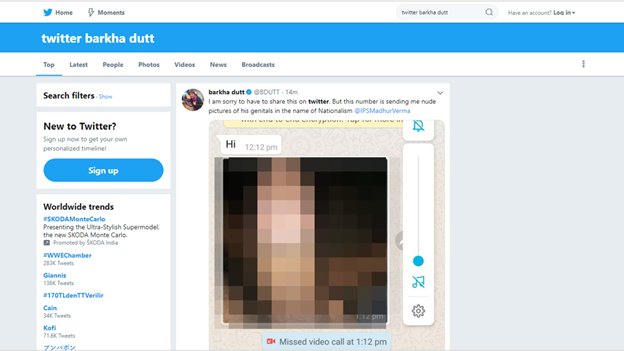 The incident shows utter shamelessness and negligence of Barkha Dutt. This is a matter of sexual harassment and Barkha should have turned to police and lodged an FIR against it. However, that would be a simple approach and Barkha won’t be getting that much attention. The incident clearly ponders the fact that Barkha can do anything to be in limelight. Moreover, this is a nauseating attempt of the ‘epitome of hypocrisy’ to distract the nation from the real issue.

The ‘saviour of democracy’ can go to any extent to damage the thread of national integrity of India. People like Barkha Dutt, Sagarika Ghose and Sanjukta Basu even had the gall of labeling the attacks as a ‘conspiracy hatched by BJP for 2019 elections’. To make matters worse, news agencies like India Today and Scroll even pulled out all stops to whitewash the suicide bomber, Adil Ahmed Dar. This reveals the extent to which the liberal cabal is going to shift the focus from attacks even if it means spreading fake news.