Newswire
MP Police to help UP counterpart in hunt for gangster Dubey (Ld) 2 hours ago
2 SSB personnel killed in a case of fratricide in Kashmir 2 hours ago
‘Gujarat hub of Chinese investment’: Congress hits out at PM 2 hours ago
K’taka’s Covid tally breaches 25k with 1,843 new cases 2 hours ago
Biz travel biggest reason for passengers to travel: Vistara survey 2 hours ago
Black panther spotted in Karnataka’s Nagarhole Tiger Reserve 2 hours ago
Next
Prev

India to surpass US economy by 2030, says Report

by Shantanu Shekhar
in Economy

According to a report by Livemint, Standard Chartered PLC, a British multinational banking and financial organization, has predicted that India will be the second largest economy by 2030. The projection has been done using Nominal Gross Domestic Product (GDP) and Purchasing Power Parity exchange rates (PPP). As per the projections, India will be ranked second just behind China and ahead of the US.

The report further stated that by 2030, current emerging markets like Indonesia, Turkey, Brazil, and Egypt would break into the world’s top ten economies. Also, these are some of the densely populated countries in the world. 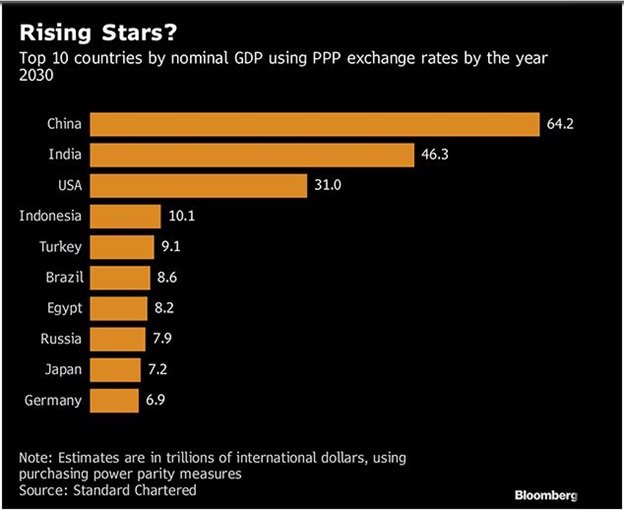 Standard Chartered PLC added, “Our long-term growth forecasts are underpinned by one key principle: countries’ share of world GDP should eventually converge with their share of the world’s population, driven by the convergence of per capita GDP between advanced and emerging economies”. It also speculated that current economies like France and the UK would not feature in the list of top ten economies while Japan and Germany may occupy the ninth and tenth positions respectively.

The British Banking giant further projected the Indian economy to grow at 7.8% by the 2020s while China’s growth will remain moderate to 5% by 2030. As a matter of fact, Asia’s share of global GDP, which rose to 28% last year from 20% in 2010, will probably reach 35% by 2030. The GDP of Asia at that time will be larger than that of the EU and US combined, stated the report.

Not to forget the fact that, the FDI inflow in India surpassed that of China in 2018 with some mega deals like Walmart-Flipkart, and acquisitions by Unilever and Schneider Electric. Walmart’s $16 billion acquisition of a majority stake in Indian e-commerce company Flipkart has been instrumental in pushing the total FDI. Mergers and acquisitions (M&A) deals by end of 2018 totalled around 39.5 billion dollars while for China it stood at 33 billion dollars. The M&A deals in India witnessed exponential growth and have doubled since the last year; the total worth of the deals in 2017 was 18.6 billion dollars. China, on the other hand, recorded deals worth 32.5 billion dollars which is 80 percent of India’s total deal in 2017.

Also, the Indian market became the best performing market in 2018 with 5.93 percent growth. On the other hand, the Chinese stock market registered worst performance and shed almost a quarter of its value. The other emerging markets in Asia also performed badly. South Korean stock market lost 17.3 percent, Taiwanese market lost 14.7 percent, Japanese Nikkei lost 12 percent, and Singaporean market lost 10.3 percent value. The Indonesian market also shed 2.54 percent of the value. At the time when almost all the emerging markets and even the developed markets across Asia performed very badly, the Indian market is ‘on a High Fly’.

There appears no doubt about the fact that India is the future of Asia and will drive the Asian as well as global growth in upcoming decades. The future belongs to India as the country is moving ahead with sound macroeconomic fundamentals. The decline in oil prices and positive domestic sentiment will push the Indian economy towards becoming a global superpower.