Business Standard, one of the largest English language business daily edition newspaper and a news portal in the country has withdrawn a story titled ‘Rahul or Modi, who is more searched in India? Here’s what Google data show’ after rebuttal from tfipost.com and OpIndia. “This story has been withdrawn because there are various ways to search for ‘most searched politician’ and in some other methods Prime Minister Narendra Modi is ahead of Rahul Gandhi”, wrote Business Standard. The story was published on January 8, 2019, and written by Surbhi Gloria Singh.

“Congress President Rahul Gandhi has emerged as the most searched politician in the online news segment, beating his political nemesis Prime Minister Narendra Modi. According to Google Trends, on a scale of 0-100, Rahul scored 45, while Modi scored 34 between January 1, 2018, and January 6, 2019. In December 2018, Rahul Gandhi (44 worldwide, 49 in India) was ahead of Modi (35 worldwide, 38 in India) in terms of search on Google News,” as per the article. The articles published following screenshots of proving the point. 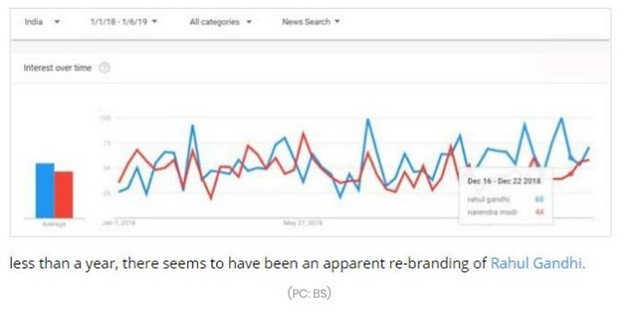 One must put full names ‘Narendra Modi’ and ‘Rahul Gandhi’ to reach the desired result. If just ‘Modi’ or ‘Rahul’ is used, then Modi appears way ahead of Rahul Gandhi. 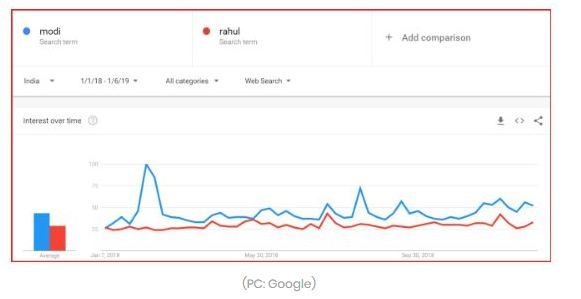 One needs to select ‘term search’ to see Rahul Gandhi being ahead of Narendra Modi. If the person goes for a general topic search, PM Modi leads with a substantial margin. 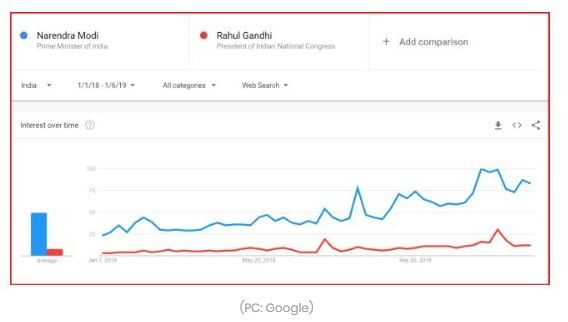 One must filter the specifications and click the news section to get the desired result. In the web search too, PM Modi seems to have an advantage over Rahul Gandhi. The user also needs to go to ‘news search’ filter to see Rahul Gandhi beating PM Modi because if one goes to ‘news category’ then PM leads the way with a huge margin. 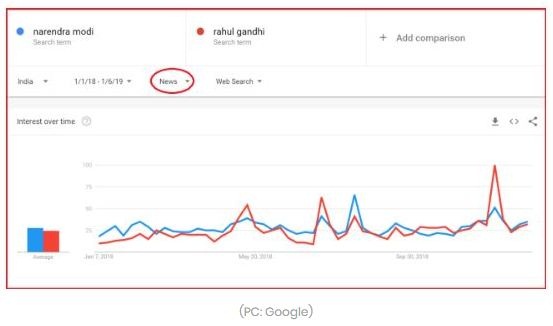 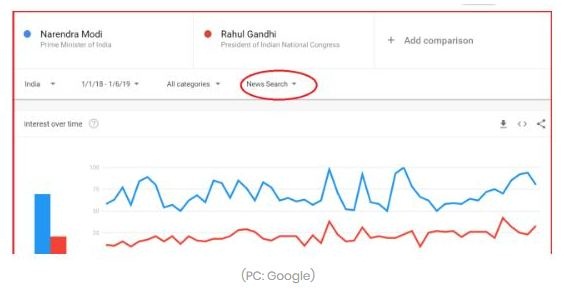 The mainstream media has been very unfair in the coverage of Narendra Modi since he became the chief minister of Gujarat and this has continued till today. The disdain of Lutyens’ media towards Modi government is clearly visible from the overall reporting on the policies of NDA. The left-liberal media establishment collaborates with the opposition, mainly Congress which has nurtured and nourished it since the days of state monopoly over media and spreads ruckus. The state monopoly over media though has ended in last the few decades but the subservience of left-liberal media to Congress remains the same. The people in the media still spread misinformation on the direction of their political masters.

The people in the media still pursue agenda on the direction of their political masters. Former chief economic advisor, Arvind Subramanian criticized media for unfair coverage of his writings on demonetization. “Journalist’s rendition of this is always the juice, the spice, the masala, the negative,” said Subramanian.

The short-sighted and ideologically polarized anchors and journalists in English media have agendas and they selectively choose the facts to suit their pre-determined conclusions. The media needs to behave more responsibly and should have the national interest in the top of their priority list rather than showing interest in the number of searches Rahul Gandhi appears. If not for opindia’s article which completely blasted off the misinterpretation done by Business Standard the article would have succeeded in painting a rosy picture of Rahul Gandhi’s popularity amongst the Indian masses.