Former CM of Bihar and Rashtriya Janata Dal leader Lalu Prasad Yadav is not new to controversies and allegations of scams. It seems that trysts with shady elements from the society and doing rounds of police stations and courts has become a common trait of the present generations of RJD leaders as well. A photo of Lalu Yadav’s son and political heir Tejashwi Yadav has gone viral on social media, this has happened because in the photo Tejashwi can be seen with a dreaded criminal, Suresh Chaudhary from Bihar. 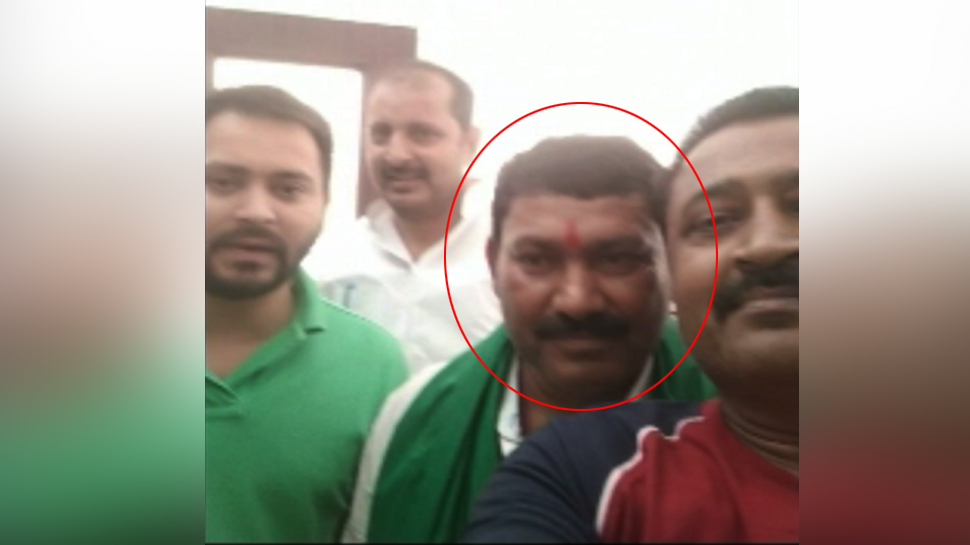 The official spokesperson of Nitish Kumar’s JDU in Bihar and Bihar state assembly member Neeraj Kumar has expressed concern over the increased proximity between Tejashwi Yadav and criminals. The JDU spokesperson has written a letter to the Director of Police in Jharkhand, warning him of a possible jailbreak of Lalu Yadav . He was convicted by the High Court in Jharkhand in connection with the fodder scam, he is currently serving time in Hotwar jail which is located in the state capital, Ranchi.

In the letter written to the Director of Jharkhand Police, Neeraj Kumar has expressed the concern that Tejashwi Yadav might be plotting an escape for his father from the jail in Jharkhand. The concern expressed by Neeraj Kumar might sound far fetched but the close proximity between the criminal from Bihar and the RJD leader will definitely have a negative impact on the image of the leader. RJD’s and Lalu Yadav’s connection with criminals needs no introduction, the party has been known to maintain and nurture leaders with criminal backgrounds such as Mohammad Shahabuddin, the notorious former MP from Siwan, Bihar who had been debarred from contesting elections by the judiciary. Tejashwi Yadav in fact had first visited the house of the former MP in Siwan and then had spoken at a public meeting, during his speech in the public meeting which was a part of his “Save Constitution” march, the criminal Suresh Chowdhury was seen sharing the stage with the RJD leader. The JDU spokesperson has requested the Jharkhand Police to take cognizance of the issue and to take necessary action to nullify any such attempts in the future.

JDU had earlier in a written letter suggested Tejashwi Yadav to save his own family and party before starting his Save Constitution march. The JDU spokesperson had levied more charges of corruption on the RJD which is already reeling from the various judgments which have come against the direct family members of Lalu Yadav. He also questioned RJD’s decision to continue with Lalu Yadav as the head of RJD, even after the judiciary had debarred him from contesting elections owing to his involvement in many scams. The letter written to the RJD chief challenged Tejashwi to remove his father from all the posts in the party. Earlier this week the Income Tax department had attached 17 properties worth 128 crore under Benami Transactions (Prohibition) Act to be seized from Yadav family. These properties include farm houses of Yadav family in posh localities of Delhi and Patna. Lalu’s wife Rabri Devi, son and former Bihar deputy CM Tejashwi Yadav, daughters Chanda, Misha and Ragini and son-in-law Shailesh Kumar are among the family members on whose name the property was transferred. Four cases against Yadav family were registered in September last year under the Benami Transactions (Prohibition) Act. The convicted people under Benami property act could face jail sentence up to seven years and monetary fine of 25 percent of market value of the property. The convicted person is also barred from contesting election for six years excluding the prison term he/she serves. The action taken under the Benami property act have further diminished the credibility of Lalu Yadav and his family, now sharing the stage with notorious criminals will further impact the image of Tejashwi Yadav who is yet to carve a niche for himself in the state politics.

‘With us or against us’ : How the Congress party attacks journalists and stifles media freedom