‘Rahul could not even run a single coach factory in his constituency’, Piyush Goyal says on Rahul’s ‘Make in’ claims

In the last few months, Congress President Rahul Gandhi has come up with ‘Made In random towns and cities of India idea’, depending on his rally’s venues. While addressing a rally in Chitrakoot, Rahul Gandhi said that he is waiting for the day when Chinese people click selfie with ‘Made in Chitrakoot phone.’ Along the same line, in a rally in Uttar Pradesh he said he wants Obama’s bed sheet to be marked with ‘Made in UP’. The idea of ‘Made In..’ is good and is probably borrowed from ‘Made in India’ initiative launched by PM Modi in 2014, a few months after coming to power. But when it comes to execution of ‘Made In..’, Congress’ track record is very poor.

The party promised a rail coach factory on the border of Amethi and Raebareli. These are Lok Sabha constituencies of Rahul Gandhi and Sonia Gandhi, respectively. Since 1980s, both constituencies are considered to be ‘safe-seats’ for Nehru-Gandhi family. The Modern Coach Factory, Raebareli was announced back in 2007 to develop the family’s fiefdom. The Rae Bareli coach factory started production only in 2014 under the NDA rule while it had been functional since 2007 under the UPA regime. Piyush Goyal pointed out that the Raebareli coach factory which came under the Amethi constituency had been unproductive till 2013. In 2014, it took a thrust from the BJP government to make the factory productive. In 2017 alone, the factory had produced 700 coaches while it is projected to produce 1500 coaches by the end of this year and the next year’s goal is to produce 3,000 coaches in the factory. 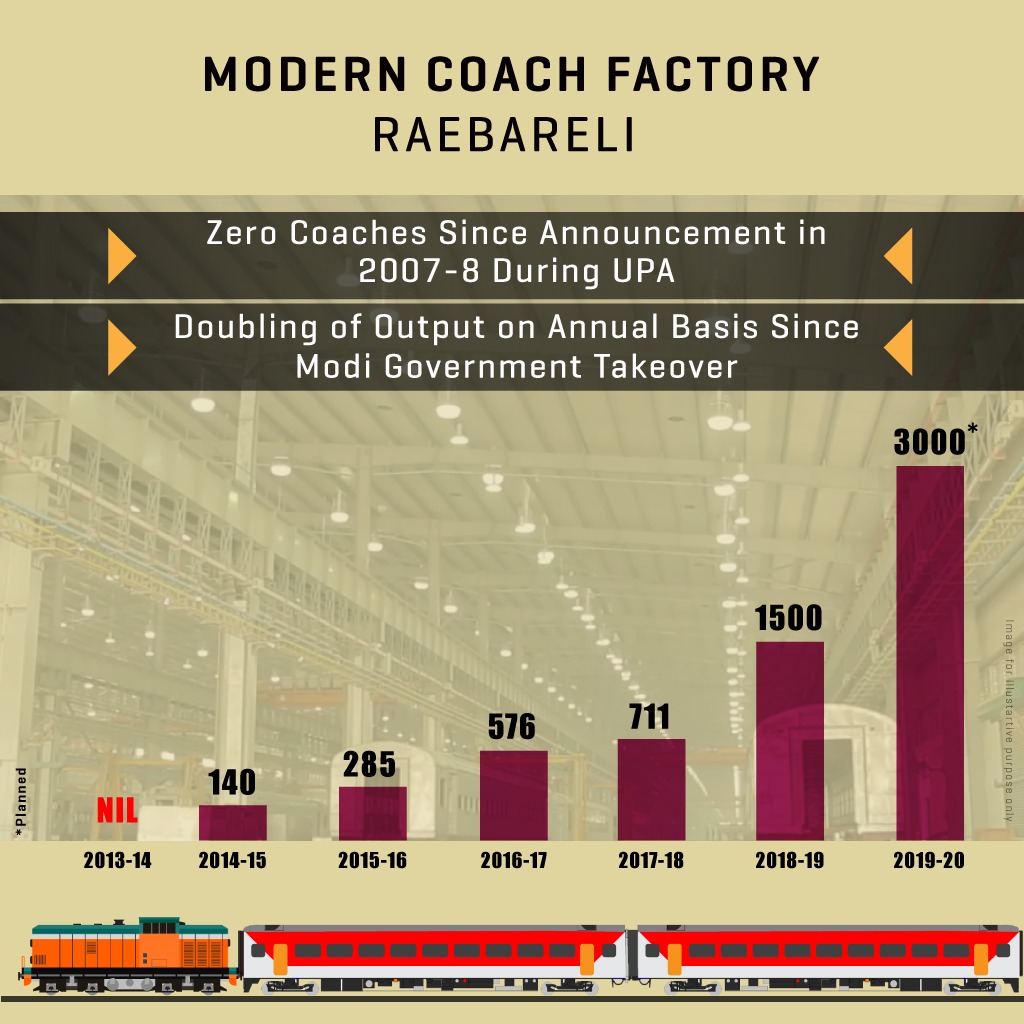 Congress is very good at making grand plans and publicizing them. But when it comes to execution, it fails disastrously because its leaders are good at paperwork not at groundwork. This characteristic Congress trait was also exhibited in the functioning of Modern Coach Factory, Raebareli under UPA government. The government designed grand plans for factory but production could not start until BJP came to power. Rahul Gandhi’s speeches of ‘Made in’ which were so lavishly used in every region of Madhya Pradesh, were nothing but another attempt of selling empty dreams to the people of the country. To expect Rahul Gandhi to change the face of the country is a far flung thought considering he could not even make a railway coach factory in his own constituency productive in more than 10 years.

Raebareli, constituency of Sonia Gandhi is categorized among 250 most backwards districts of the country by Ministry of Panchayati Raj. It receives Backward Regions Grant Fund (BRGF) by the Union government.

Recently, Piyush Goyal, the Minister of Railways attacked the Congress president through a tweet on Congress’ track record on MCF, Raebareli, effectively demonstrating the hollowness of Rahul Gandhi’s ‘Made in’ initiative.

Raebareli Coach Factory which comes under Amethi constituency was announced in 2007-08. Until 2014 it had not produced a single coach, so we gave it a thrust. Last year it made 700 LHB coaches, this year it will make 1500 and my target for next year is 3,000 coaches: @PiyushGoyal pic.twitter.com/bMPbSrdTa5

Pointing out the ineptness of Rahul Gandhi and his party to run even a single factory efficiently, Piyush Goyal quipped that this is why BJP has made its motto to fulfil the goal of Mahatma Gandhi “that Congress should wind up shop” in India. India lags behind in manufacturing sector despite having large population, cheap labor and favorable geographical conditions and as Piyush Goyal correctly pointed out, this demonstrates the inefficacy of Congress’ long rule. Congress ruled country for almost six decades out of seven after independence. If the country could not make great leap forward in manufacturing sector in last seven decades, who else we should blame except Congress.

Cracks within the social media team of Congress