The combined effect of curbs on pollution in China and India’s aggressive push to boost its infrastructure sector has made Indian industries (Electricity, steel, coal, cement) and their accessory (cable, wire, graphite) companies among the most profitable in the world. Gopal Agrawal, Chief Investment Officer at Tata Asset Management Ltd said “Of the 15 best-performing stocks over five years, eight are from Asia’s No. 3 economy and range from graphite electrode makers to equipment providers. Companies such as HEG Ltd., Graphite India Ltd.,and Finolex Cables Ltd. have benefited from China’s pollution control measures as well as India’s pledge to electrify even the remotest village.”

China is not only the largest steel producer in the world, but its steel plants are also responsible for toxic pollution in the country. With the end goal of pollution control, China had decided that it will either shut down or curtail operations at dozens of steel plants from November 2017 over the next five months under an aggressive action plan to reduce winter pollution in Beijing and its surrounding areas. Every year we hear the news that major cities of China like Beijing and Shanghai face shutdown due to smog, sandstorm, ozone pollution etc. The people in the city have to wear masks in winters due to smog and flights get canceled, while roads get blocked due to the same. Therefore the Chinese government has taken the policy decision to fight against pollution which includes tightening emission norms. The tightened emission norms and pollution control spurred steel production from electric arc furnaces, which use graphite electrodes to process steel from scrap.  Graphite electrode producer HEG’s stock surged 1,457 percent last year, outpacing Bitcoin’s gains. The supplies of graphite are also constrained, therefore the company’ stocks has gained by 45 percent in 2018 so far. Gopal Agrawal cautioned that is China relaxes its environmental pollution norms, it could be harmful to the Indian industry. He said, “Graphite is a godsend opportunity from China but If China relaxes its environment pollution norms that could negatively impact the party for India’s industrial firms.”

Apart from China’s pollution control measures, the second factor responsible for the good performance of Indian industries is the Modi government’s aggressive push to boost infrastructure in the country.   The nation has also pledged to spend $88 billion this fiscal year on roads, railways and other infrastructure. The government’s drive to achieve 100 percent electrification in rural India has buoyed demand for cables and wires used in the power sector. India added a 24,000 Mw power generation capacity per year, compared to 4,800 MW by earlier governments. Besides, a 25,000 circuit km transmission capacity was added per year, compared to 3,400 circuit km during the previous governments. Now India stands 4th in wind power, 5th in renewable power and 6th in solar power globally. The government has also planned for 100 percent electrification of railways which is at almost 45 percent as of now. Within next few years, all the diesel engines on major routes will be replaced with electric ones. 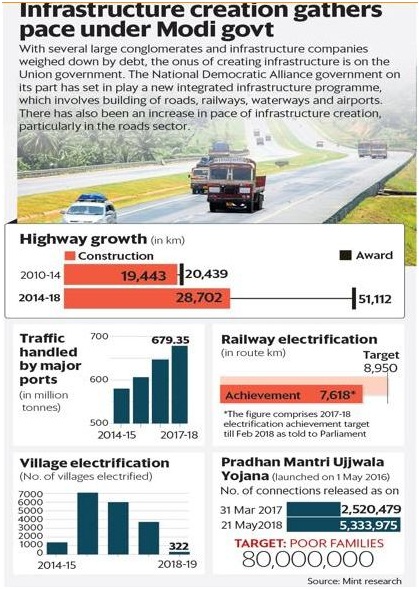 The government’s efforts to put public investment in infrastructure sector have created large domestic demand for coal, steel, iron, granite, and accessories of these sectors like cable, wire, graphite etc. The pollution crackdown in China has made our industries more competitive in the international market, and therefore, the exports have also grown. The huge demand from the domestic and international market has made Indian industries among the most profitable in the world.

Swamy’s prophecies: Here’s how probable these are.