In a historic turning point in the relationship between North Korea and the United States, North Korea’s Supreme Leader Kim Jong Un and US President Donald Trump finally met at the Singapore summit which had been planned for weeks. The two leaders shook hands and proceeded to sign a document, whose finer details haven’t been disclosed by either of the nations’ officials as yet. Several news outlets have reported that Kim has committed to the ‘complete denuclearisation of the Korean Peninsula’.

The decision by President Donald Trump to meet Kim Jon Un took many by surprise as the US President had only recently announced that the United States had unilaterally withdrawn from the awaited talks between the two leaders. Trump had cited that heavy language on part of the North Korean dictator tacitly amounted to a nuclear threat, and felt that the United States could not engage with a nation openly threatening its security.

“We had a really fantastic meeting. A lot of progress,” Trump told reporters three hours later after sitting for a series of talks and a working lunch. “Really very positive. I think better than anybody could have expected.”

“It has not been easy to come to this point,” Kim said, according to a CNN translation of his remarks. “For us the past has been holding us back, and old practices and prejudices have been covering our eyes and ears, but we have been able to overcome everything to arrive here today.”

Most experts predict that the document signed is most likely a statement of understanding, akin to a MoU or a Memorandum of Understanding. While provisions in an MoU are not legally binding, it is nonetheless a massive step for the two nations that have traded nuclear threats over the past year. Relations between the two nations had reached a new low as North Korea revamped its missile tests on the Korean peninsula. What followed were harsh American sanctions on North Korea, which seemed to have taken their toll on the North Korean economy as food grain prices reached an all time high, while further sanctions made importing very difficult for the hermit kingdom.

Kim Jong Un opening up to talks was the first achievement for Donald Trump, after which he surprised both sides by announcing a unilateral withdrawal from the planned talks at the Singapore summit. The photos released from the meeting between the two leaders show the pair firmly shaking hands, a surreal image for anyone who understands the gravity and significance of the event. 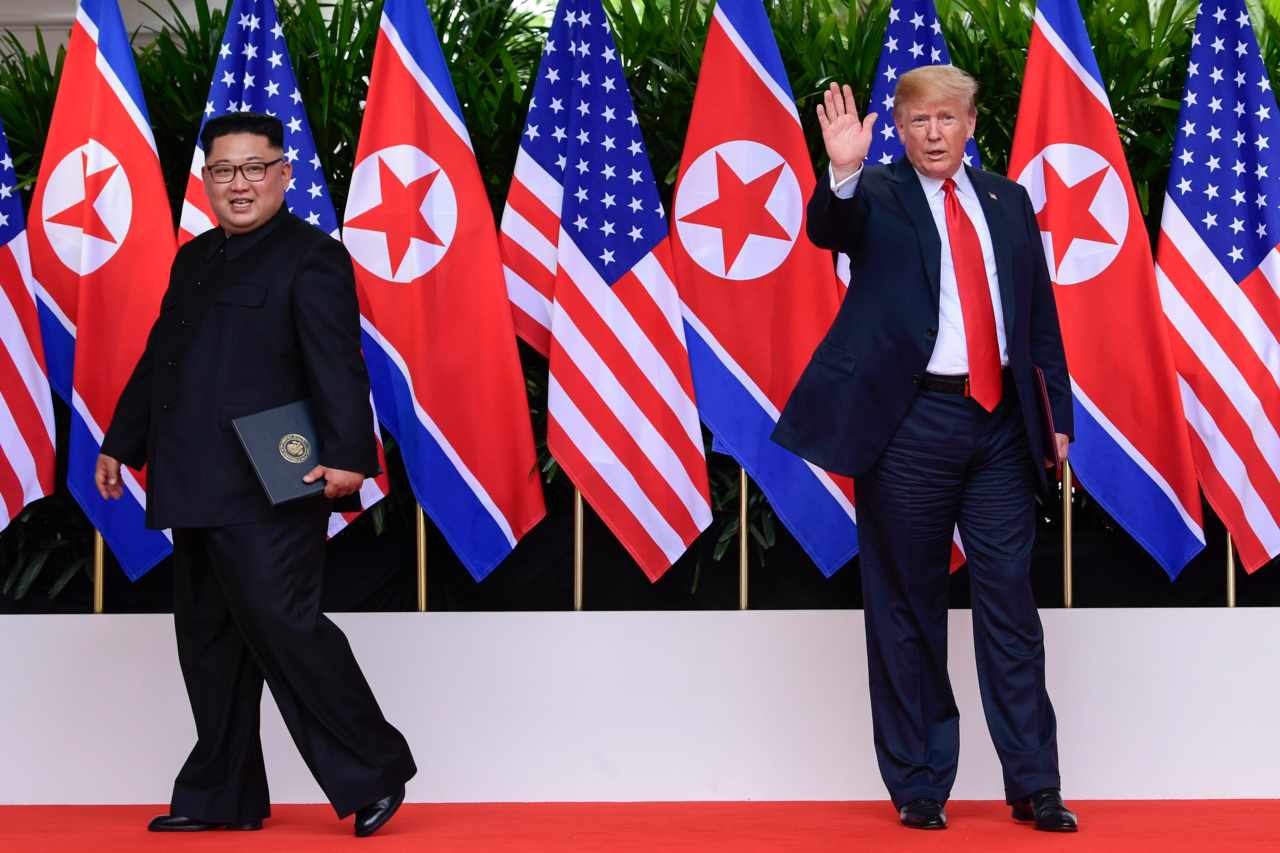 Donald Trump has stated that the finer details of the signed document will be revealed soon at a press conference, while also praising Kim as a ‘great and smart guy’, who he feels he will have a ‘great relationship’ with. The ultimate fate of the shaky Iranian nuclear deal put together by Barack Obama before the culmination of his final term is testament to the fact that implementation of the agreement is not guaranteed. Nonetheless, the event will go down in history as a major turning point in what could have potentially led to a direct conflict between two nuclear powers. The meeting with Kim Jong Un will also go down as a diplomatic feat by Donald Trump, since none of his predecessors, especially Barack Obama were able to get North Korea to agree to de-escalate tensions between the two nations.

It will be interesting to see how outlets like CNN respond to the latest developments, after labelling the US President as a ‘mad man with a nuclear button’. The series of events are proof of Donald Trump’s shrewed negotiation skills, after effectively gaining the upper hand by previously announcing a withdrawal from the meeting and taking North Korea and Kim Jon Un by surprise. By earlier promising that sanctions would be lifted, Donald Trump has now stated that the lifting of sanctions is a ‘complicated process’ which may take time. The promise of lifting sanctions was the United States’ leverage over North Korea, wich it used to bait it to come to the negotiation table.

In light of the growing warmth between the two nations and seeing an opportunity for economic cooperation, India had sent General VK Singh to North Korea 2 weeks back. The country is rich in resources and would desperately need economic partners as it slowly opens up its nation and economy to the rest of the world. The decision can also be seen as an attempt to win over a time trusted ally of China from right under the dragon’s nose.

Despite China lauding the meeting between Donald Trump and Kim Jong Un the latest developments and the potential de-escalation of tensions on the Korean Peninsula could have a direct impact on the events in the South China Sea. The latest diplomatic victory for Donald Trump could go on to be a strategic one as China would eventually lose a valuable ally in the region.

“If statehood is granted to Delhi, I will campaign for the BJP”: Arvind Kejriwal