The historic step of demonetisation  has helped India in significantly improving its tax base. One of the primary objectives of demonetisation was to crackdown on tax evasion and black money transactions. From new data it seems that the PM Modi led government has not only achieved its objectives, but also achieved several collateral benefits for the Indian economy.

According to Economic Survey 2018, which was prepared by Chief Economic Advisor Arvind Subramanian, 10.1 million people filed income tax returns in the year following demonetisation (November 2016- November 2017), while the average for the last six years has been 6.2 million. This shows an increase of over 1.5 times the previous number of income tax returns filed.

The PM Modi government has taken one step after another to crackdown on black money since coming to power in 2014. Demonetisation, coupled with the Real Estate (Regulation and Development) Act and the Goods and Services Tax bill, has been an integral part of this initiative. These steps together in an integrated environment proved more effective in the crackdown on black money. In isolation, the bills were not as effective as they have been after all the above enactments have come into force. Therefore, a fair evaluation of the impact of these steps can only be done in a post-GST environment to determine the effectiveness of the policies.

Kiran Stacey writes in Financial Times that “Demonetisation together with GST could be hailed as the most significant reform in post-independence economic history of India”. 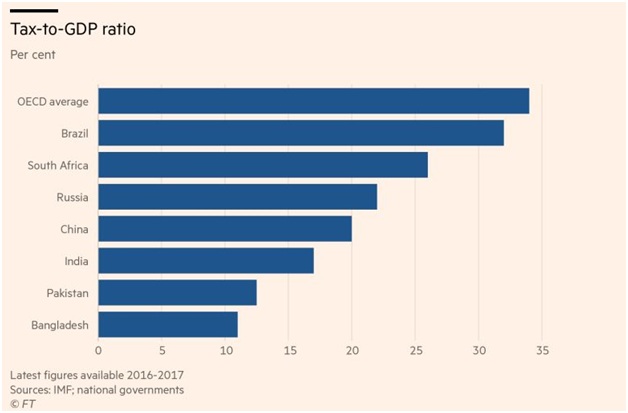 India has the lowest Tax to GDP ratio among BRICS countries. As we can see from the data given above, most of the developing countries have low ‘tax to GDP ratio’. In order to move from a developing nation to a developed one, a nation has to increase its citizens’ tax compliance. If Tax to GDP ratio is low, a country cannot afford to provide basic amenities like health and education to its citizens. Universal access to these primary needs is required to build human capital and improve standard of living. India is planning to introduce Universal Healthcare through the National Health Protection Scheme (Popularly known as “Modicare”). The increased ‘tax to GDP ratio’ means that more money goes directly into government coffers. This money could be helped to make India a welfare state of the kind that Deen Dayal Upadhyay had dreamed of.

The PM Modi led government with full majority in the Lok Sabha is able to take bold decisions like the implementation of GST and demonetisation. Indirect tax collection rose exponentially in recent months. With this extra tax collection,  the government hopes to provide better public services to people.

It should be noted here that in the post-demonetisation environment, there has been a sense of fear among tax evaders, which is evident in the increased number of tax filers in the months following the decision. 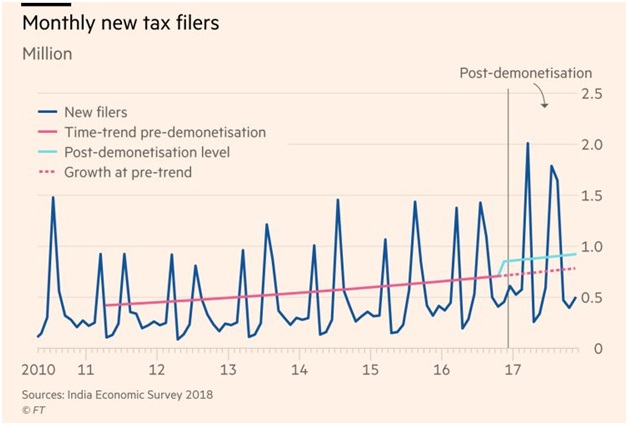 Last year’s implementation of GST has also helped the government to increase the number of indirect income tax payers in the country. Now even small businesses previously belonging to the informal sector are registering with the new regime as they can claim tax credits on their supplies.

The increased number of taxpayers, along with the increase in the Tax to GDP ratio, is proof enough that demonetisation has made a positive impact on the state of the Indian economy.

Legacy of Jinnah: Partition, plunder and birth of Pakistan

NCPCR calls for modernization of Madrasas.

Ravana was not a master warrior, scholar or anything that liberals say. He was a coward, a terrorist, and a rapist