by Asutosh Mohanty
in History
0

We are really thankful to Ms. Meenakshi Jain for the wonderful insights in her books “Rama and Ayodhya” & “The Battle for Rama: Case of the Temple at Ayodhya”. Without those elaborate details this article wouldn’t have been complete. We are also thankful to Aryan Books International for their support and guidance

1. By meditating on “Ram Ram Ram” (the Name of Ram), my Mind gets absorbed in the Divine Consciousness of Ram, which is Transcendental,

2. The Name of Ram is as Great as the Thousand Names of Bhagwan (Vishnu Sahasranama))

The Ayodhya Ramjanmabhumi dispute has gripped the national consciousness like no other case in last several decades. There aren’t many people who don’t have a position on the dispute. Some say Mandir Wahin Banayenge, while some ask for a hospital or a park there for the sake of maintaining peace and inter-religious harmony and some bat for a mosque, which would possibly go down as our unambiguous commitment to secularism.

While we are all aware of the protracted and prolonged legal battles in the Ayodhya Ramjanmabhumi dispute, but have we ever imagined why it took so long?

Was there any group behind unnecessarily delaying of the proceedings? Before you assume anything let’s see what Dr K.K. Muhammad (former Regional Director (North) of the ASI (Archaeological Survey of India) stated in his autobiography “Njan Enna Bharatiyan (I an Indian)” that exposes the attempts of Leftist Historians to systematically derail attempts at a peaceful resolution of the issue”

“A team of Left Historians in JNU such as Romila Thapar, Bipin Chandra, and S. Gopal argued that there was no mention of the dismantling of the temple before the nineteenth century and Ayodhya was a Buddhist-Jain center. Historians such as Irfan Habib, R. S. Sharma, Athar Ali, D. N. Jha, Suraj Bhan, too joined and it became a big grouping”

“… instilled courage and gave false hopes to the BMAC. This resulted in a reversal of the thought process amongst Muslims who had till then, been pondering wholeheartedly about giving back the mosque and settling the matter amicably. They came to a renewed conclusion that the mosque will not be given…”

In this article we will just try to stick to the point why Left Historians were biased against existence of Ram, Ramjanmabhumi and the Mandir. As a popular saying goes “Leftists neither believe in nationalistic values, nor do they believe in prioritizing culture and religion…”

Entry of Leftist Historians in this Ramjanmabhumi debate

The main argument was that Ayodhya became famous as a major religious centre of Bhagwan Ram worship only around 18th century when Ramnadi Sadhus started settling in the city. They out rightly rejected that “Mandir was demolished to build the mosque…” And also questioned the assumption itself that “Muslim rulers were invariably ad naturally opposed to the sacred places of Hindus”

Meenakshi Jain, in her book “Ram and Ayodhya” states

Kautilya (fourth century BC) knew the central story of the Ramyana and Mahabharata. … He said, ‘Ravana perished because he was unwilling to restore a stranger’s wife, and Duryodhana, because he was averse to part with a portion of his kingdom

Mahavibhasha, composed during the rule of Kanishka, the Kushan ruler, around the 2nd Century CE has mention of Ramyana especially the size of the book i.e. around 12,000 shlokas. It also focused on two themes: Sita’s abduction by Ravana and her rescue by Ram

In the third century CE, “K’ang-seng-hui rendered the Jataka form of the Ramyana into Chinese”

The Buddhist logician, Dinnaga, wrote the Kundamalla, an “interesting Sanskrit dRam“, based on the Ramyana. Dinnaga lived in the 5th century CE

Questioning the authenticity of Valmiki Ramyana

Prof Romila Thapar was very critical of using Valmiki Ramyana in this debate and mentioned there were numerous versions of Ramyana and they couldn’t all be labelled as manifestations of a single religious expression.

Contrary to Left contentions, Valmiki Ramyana is widely accepted as the earliest mention of Bhagwan Ram’s life and the numerous retellings of the Ramyana were of Valmiki’s narrative which everyone is aware of.

Left Historians have been continuously trying to create a false narrative that present day Ayodhya is not same as highlighted in Ramyana or scriptures.

Ayodhya’s importance can be traced back to Satya Yuga in ITIHASA. In Satya Yuga, Manu is said to have “founded the city of Ayodhya and handed it over to Ikshvaku.” The Puranas provide a “genealogy of kings from Manu to Dashrataha”. Valmiki in his Ramyana, stated Ayodhya was the capital of the Kosala Rajya under King Dasaratha.

History records Kosala as one of the sixteen mahajanapadas and became powerful under King Prasenjit before becoming part of Magadha during Nanda’s rule in 4th Century BC. Towards the end of Mauryan rule, Kosala was referred in Yuga Purana in the context of Greek Invasion. The Mauryas lost Kosala to the Sungas in 187 BC.

Ayodhya also finds mention in Vasudevahindi (Jain literature) in name of Saketa as one of the best cities of Kosala Janpada. In Jain works Ayodhya finds reference as Aujjha, Kosala, Ikkhagabhumi and Rampuri.

Apart from this Kalidasa in his literary work Raghuvamsha had mentioned Saketa many a times and it also finds mention in Buddhists texts.

Left Historians were continuously trying to create a fake narrative that Ram cult never existed before 13th century. There are numerous evidences which refutes their fake claims: 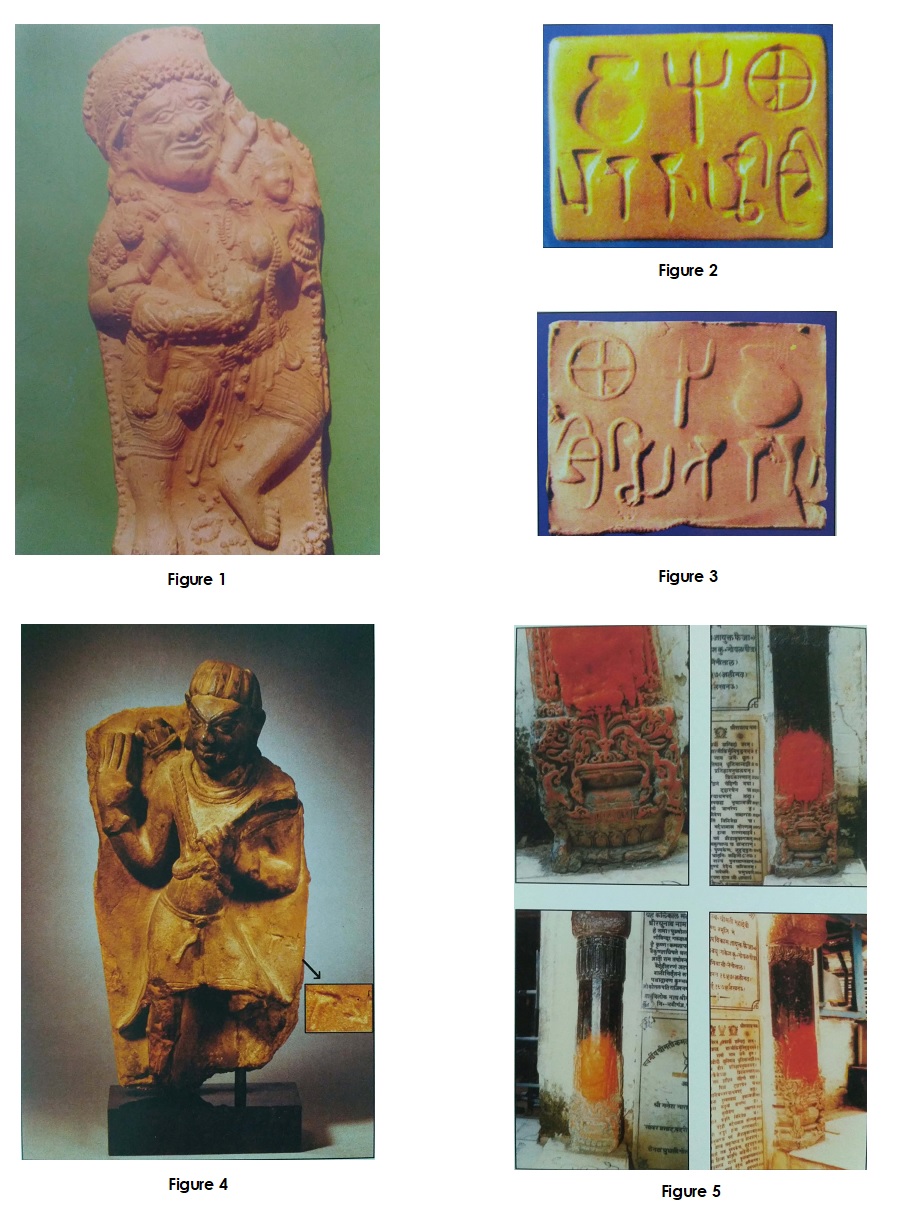 Denial of demolition of Ramjanmabhumi Mandir

Let’s verify their claims through the prism of some eminent works of Arabic, Persian and Urdu literature.

Meenakshi Jain, in her book titled “The Battle for Ram: Case of the Temple at Ayodhya” mentions that several works of Arabic, Persian or Urdu literature state how Babri Masjid was created by demolishing the Ramjanmabhumi Temple. Here are some examples:

“And among them is the great mosque that was built by the Timurid King Babar in the sacred city of Ayodhya. It is believed that Ram Chandra considered to be the manifestation of God, was born here. There is a long story about his wife Sita. There was a big temple for them in this city. At a certain place Sita used to sit and cook food for her consort. Well, the said king Babur demolished it and built a mosque at that very place with chiseled stone in 923 AH (Narain 1993: 16-17)

2.) Mirza Jan in his work Hadiqah-i Shuhada (Lucknow 1856) has referred to a Persian text, Sahifah – i Chihal Nasaih- I Bahadurshahi. Among its sermons, the book advised devout Muslim rulers to keep isolaters in subjection to Islam and,

“keep in constant use for Friday and congregational prayer the mosques built up to strengthen Islam after demolishing the temples of the idolatrous Hindus situated at Mathura, Banaras, and Awadh etc., which the wretched infidels have according to their faith, adjudged to be the birthplace of Krishna in one case, Sita ki Rasoi in another, and Hanuman’s abode in a third…”

“Babur got the mosque built after demolishing the Janmasthan and used in his mosque the stone of the same Janmasthan, which was richly engraved, precious kasuati stone, and which survives even today.”

Following the order of the Lucknow bench of the Allahabad High Court on 5 March 2003, the Archaeological Survey of India team carried out excavations at the Ramjanmabhumi site between 12th March and 7th Aug. 2003 based on a preliminary Ground Penetrating Radar (GPR) survey of the area by Tojo – Vikas International Pvt. Ltd.  The report was submitted on 22nd Sept., 2003. All this while, the pro-Babri group ran false campaigns questioning the ASI team within and outside the court.

Prof Irfan Habib accused the ASI of deliberately overlooking material evidence that pointed to the existence of an earlier mosque below Babri (Hindustan Times, 6th July 2003). Suraj Bhan also proclaimed it could have been a mosque of the Sultanate period (Frontline 26th Sept 2003)

The malicious intent of the Left Historians were duly noted by the Hon’ble Court. The Court felt constrained to comment on their deliberate attempts (page 3774 para 3712; page 3767 para 3702). The Court also observed that when the structures underneath began to appear, the complainants, in consultation with “their alleged experts” started “preparing a kind of anticipatory ground to assail the ASI people, their proceedings and report” (page 3775-76 para 3717)

In a shocking demonstration of chutzpah, Prof Habib asserted that the pillar bases (Figure 5), were concrete stones resting on the brick-bats, bonded with mud or just heaped up. Jaya Menon and Supriya Verma went a step further and accused the ASI of having created the pillar bases (page 4138-46 para 3886; pages 4146-55 para 3887; pages 4155-62 para 3888)

This particular accusation stunned the Hon’ble Court, which noted that the excavations had been conducted in the presence of the plaintiffs, their experts, nominees and advocates, and also supervised by Court appointed observers. The Court regarded it “really unfortunate” that neither Jaya Menon nor Supriya Verma could validate their complaints during cross examination

Let us just look at some testimonies of some these eminent Leftist Historians who were exposed in cross examination in the court. The fact that they were just trying to create a false narrative was out in the open yet again:

1.) Suvira Jaiswal, Former Professor of JNU. She did her Ph.D. under R.S. Sharma.

2.) C. Mishra, Satyawati College, Delhi University. He did his Ph.D. under D.N. Jha

“I have heard of Jaziya tax. At present I fail to recollect when and for what purpose it was levied. I do not remember that the Jaziya was levied only on Hindus” [Page 3596 para 3602]

“I never visited Ayodhya. I do not have any specific knowledge of history of Babur’s reign. Whatsoever little knowledge I have about Babur is only that Babur was ruler of 16th century.” [Page 3646-3647 para 3628]

The above mentioned nuggets of information clearly expose the ill-intentioned ideology of Leftist Historians who were working on a single motive to create a contentious environment so that Hindus are deprived of Ramjanmabhumi and consequently their religious rights. These forces completely opposed to a developed and communally peaceful India would always ensure that the communal pot keeps boiling and the country remains in a religious tinder box by pitting one community against the other.

They are well aware of the fact that if Mandir is built in Ramjanmabhumi then it will unite all sections of Hinduism and it will be a deadly blow to their agenda of disintegrating India into pieces. That’s the sole reason why Leftist Historians are distorting evidences and disputing historical facts and creating enough cognitive dissonance in the minds of Muslims by injecting falsehoods. For a peaceful resolution of the issue, the left has to be kept out and be exposed for what they really are!

The Battle for Ram: Case of the Temple at Ayodhya by Meenakshi Jain, 2017 (Aryan Books International)

Sikhs have a special Relation with Ayodhya and Shri Ram, Something no Modern Day Politician talks about

6th December, 1992: Shrill Chants for Ram Janambhoomi, Razing of Babri Masjid and the Birth of a New India