Jawaharlal Nehru – The Reason Behind Most, if not All of our Troubles

by Akshay Narang
in History
0

Jawaharlal Nehru can aptly be defined as the most loved icon of the Lutyens’ Media and the elite Intellectual circles. Since Independence, he has been constantly advertised as India’s greatest democrat till date and the true disciple of the Mahatma. You must have heard about other former Prime Ministers drawing flak about their blunders like Indira Gandhi being mildly criticized about her high handedness notwithstanding her coterie and her lobby in the Mainstream Media or Rajiv Gandhi being criticized for the Sikh genocide but Nehru has successfully remained the holy cow of Indian politics.

This article is all about calling the biggest historical lie of our country and exposing with specific historical inputs that how Jawaharlal Nehru was not a democrat but a self-styled authoritarian who is behind most, if not all of our broad troubles.

It is claimed that Jawaharlal Nehru was someone who knew how everyone is to be taken along and based most of his decisions on consensus. But history tells a completely different story. Nehru ran the affairs of the Government according to his whims and fancies and disregarded the advice of even those senior to him. His act of taking Kashmir issue to the United Nations without consulting his Cabinet and in fact to the surprise of his cabinet colleagues was the biggest reflector of vanity and virtual dictatorship which were a part of Nehru’s personality. The Cabinet Ministers did not enjoy any autonomy and Nehru constantly meddled in their affairs and this in part explains the growing tensions between Sardar Patel, then Home Minister of India and Nehru in December 1947. In fact, Mountbatten had once bluntly told Jawaharlal Nehru that even Winston Churchill, in his prime days would not have dared to ride as roughshod over his Ministers as Nehru was doing. (Source: Brown, Judith M., Nehru: A Political Life, 2003, p-180).

The way he led India into the Sino-India war ignoring the advice or rather wise words of caution given by Sardar Patel and the first President of India, Rajendra Prasad who by the end of Chinese war were able to see through the Sino-Indian friendship facade much better than Jawaharlal Nehru is also a reflector of the fact that Nehru could lead only the likes of VK Krishna Menon who happened to have no political or administrative skills except flattery. PM Jawaharlal Nehru ended up looking like a clueless administrator who had no idea of how to run a democratic Government and more suited to act like a despot. 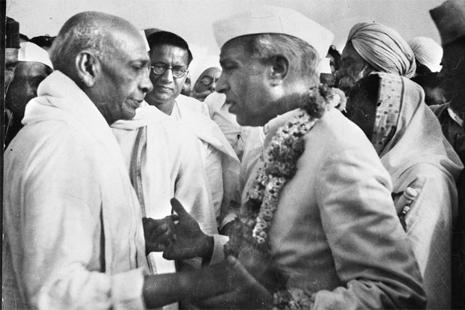 Jawaharlal Nehru remained adamant on reducing the role of his party to mere organisation without any say in the broad policy decisions made by his Government. In fact, it was Nehru who degenerated the Congress into a spineless party of sycophants by installing his courtiers in key party positions. Initially, Nehru met with some stiff resistance even as Sardar Patel succeeded in helping Purshottam Das Tandon in being appointed as the Party Chief. But as soon as Sardar Patel passed away Nehru saw his opportunity and when the 1952 Elections were around the corner Nehru succeeded in getting rid of the strong leader.

Once Tandon was done away with Jawaharlal Nehru took the party affairs into his own hands setting a very unhealthy precedent citing lack of any other strong leader. The reality was that Nehru did not want any strong face to come up or any other leader to emerge and rise in the ranks of party. Even after Nehru resigned from the post of Party President he made sure that only rubber stamps and flatterers were made the Party President exercising no real authority. It is not a matter of surprise then that one of the loyalists, Neelam Sanjiva Reddy (Congress President from 1960-63) publicly observed that a junior ministership in a State offered greater satisfaction than Congress Presidency and that he was himself treated as Mrs. Gandhi’s chaprasi. (Source: Brecher Michael, Succession in India: A study in decision making, Oxford University Press, p-131).

The present state of Congress and many other family/ personalities based parties with a clueless inheritor at the centre stage and a bunch of ‘yes men’ surrounding him can be directly attributed to the first Prime Minister of India. Political organisation and party outfits are central to a Parliamentary Democracy, by weakening this key institution Jawaharlal Nehru did a great disservice to the foundations of Indian democracy.

Blame Sonia Gandhi and Rahul Gandhi as much as you want but it cannot be denied that it was Jawaharlal Nehru who inherited political legacy and strengthened the stronghold of the family. Jawaharlal Nehru took over from his father in 1929 as the Congress President and thus the seeds of dynasty were sown by fourty year old Jawahar even before India became independent and adopted the democratic system of government. Dynastic politics again came into play during the 1946 Congress President Election. Sardar Patel was supposed to be appointed as the Congress President in accordance with the time honoured practice of the Congress given that 15 years had elapsed since Patel had presided over the Karachi session of 1931. Nehru having already presided over the 1936 and 1937 sessions was not in line for the top post. Moreover, the majority of Pradesh Congress Committees had also put their weight behind Sardar Patel. But Jawaharlal Nehru enjoyed political legacy and Sardar Patel was forced to withdraw his candidature.

Jawaharlal Nehru enjoyed the fruits of dynastic politics in the pre-1947 era and once he became the Prime Minister and was firmly in the driver’s seat after Sardar Patel’s death in 1950 he diverted his energies towards strongly establishing the family’s control and groomed his daughter as his successor to the top political post. At first, Nehru treated his daughter as his political confidante and allowed her to exercise considerable influence. She accompanied Nehru to all important administrative and political gatherings and even his international visits. Nehru made sure the Cabinet agreed that all such visits made by the heir apparent were borne by the public exchequer. (Source: RNP Singh, Nehru, A Troubled Legacy, P. 30). 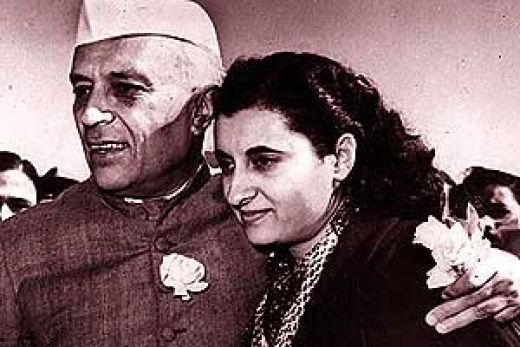 Later on Jawaharlal Nehru became more aggressive in establishing his daughter and setting in motion her prospective coronation.

In 1957, she was elected to the Central Election Committee of the Congress. In 1958 she replaced Nehru as a member of the Central Parliamentary Board which happened to be the most prominent Congress organ. Chief Election Committee was also an all-powerful body having the authority to select electoral candidates for elections to the Legislature at all levels as well as those for by elections.

Dynasty Politics was the biggest damage done by the so called Architect of Modern India. Such has been its impact that the Nehru Gandhi remained on firm control of party as well as National affairs right into the fag end of 1980s. Congress has been reduced to a family property with even seemingly incompetent Gandhis becoming the obvious leaders of the party.

Indira Gandhi may be blamed for promoting sycophancy and centralisation of power. But it is Jawaharlal Nehru who is responsible for most of, if not everything, what is wrong with our democratic institutions. All this while Jawaharlal Nehruremained a darling of the mainstream media and made sure that he acquired the image of a socialist democrat. Nehru greatly benefited from the huge propaganda machinery at his disposal and somewhat justified euphoria created by Independence due to which the unbiased and the right-thinking commentators failed to understand how Nehru was acting like a totalitarian.

If You Think Bullet Trains are a Mode of Transport You are mistaken, They are Weapons of Mass Destruction