So, you think Gau Rakshaks are the real threat? Maybe You should read about how Cow Smugglers operate

Know O brothers, that between the years when the Sindhu drank the Meluha and the arrival of the sons of Yavanas, there was an Age undreamed of, when glorious kingdoms lay spread across the Bharata like blue mantle beneath the stars. Hither lived the Aryas- the Bhupatis who valued the cows as the eminent part of their culture and livelihood. Protecting the cow from various threats and dangers, they gave the creature an equivalent status of mother.

Cow-protection had been an eminent part of our ancient Indian culture. The religious scriptures like Vedas have mentioned cow as “aghna” which literally means- one that should not be killed. The practice of protecting the cows was influenced by religious, spiritual, ethical, moral and economic reasons. Cows, the backbone of the agrarian society of the ancient Bharat and modern India, found its status because of its usefulness, which the modern society of 21st century India seems failed to evaluate. Since the ancient times of the great civilization, numerous kings, men, political personalities and societies worshipped the cows and protected it-

The first-ever communal riot took place because of cow slaughter. In Indian history, the first riot for cow-slaughter was the “Holi riot” of 1714 that took place in Gujarat. A Hindu named Hari Ram, the Gumasta of Madan Gopal, wanted to burn a Holika bonfire on the festival of Holi, which the Muslims opposed. Hari Ram went on with the burning of the bonfire. As a mark of protest, the Muslims brought a cow and slaughtered it, which sparked the riot where Muslims sided with the Afghan army to kill the Hindus. The Hindus, under the guidance of Kapurchand Bhansali, strongly retaliated to defend their lives, pride and honor. During the 1880s, Dayanand Saraswati and his Arya Samaj started religious movement of uniting Hindus to fight against the cow-slaughter which met severe protest when Muslims started riots in Bombay, Mau and Azamgarh in 1893. Between 1900 and 1947, there were numerous riots where cow-slaughter was the prime reason. In any case, protecting the cows was considered pious and the cow protectors were heroes in the eyes of devout Hindus.

However, in recent times, people consider cow-protection a communal and criminal act while killing cows in public to arrange beef-festival is considered a modern, civilized method of Freedom of Expression and Freedom of Consumption. Take the example of the youth members of India’s longest ruling political party, whose greatest mascot once supported cow-protection from the deepest core of his heart, took the liberty of killing a calf in a public, made a video of the slaughter and arranged a beef party by cooking the flesh of the unfortunate deceased calf. In recent times, killing a cow and eating the beef have become the epitome of Freedom of Expression in the liberal camp and the word “gau-rakshak” or cow-protectors have become synonymous to “terrorists”, “murderers”, etc.

Recently, two committed Gau Rakshaks, the British-resident Sonia Sharma and her friend Archie Barnwal, were shot at by cow smugglers, when these two brave women tried to save the cows that were tightly stuffed and carried in a small pick-up van.

Around 2.00 AM on 25th September 2017, Sonia Sharma and Archie Barnwal were going towards Mewat when they spotted a small pick-up van in which cows were tightly stuffed. The incident took place on Sohna Road in Gurugram. Oddly there were no rear tyres in the vehicle and yet it was speeding towards Mewat from Gurugram on just the rims. When the women chased the truck, the cattle smugglers shot at them. Luckily, the the shots missed the women and they continued chasing the criminals. After missing the shot, one of the smugglers threw a live and tied cow towards the car, which the women avoided. However, the cow hit the road hard and was injured severely. Realizing that they cannot escape the women due to their truck, which was running without tyres, the smugglers abandoned the vehicle and fled. Such is the attitude of the media towards the Gau Rakshaks or cow-protectors that the renowned newspaper The Statesman mentioned Sonia Sharma and Archie Barnwal as cow-vigilantes instead of cow-protectors in its write-up. Vigilante literally means a group of people who undertake law and enforcement without legal authority. Sonia and Archie did not undertake law and enforcement and did not break any rules. But, we can observe the contempt of the media towards them because they tried to protect cows.

The media houses and secular brigade of this country are interested in news which suit their political agenda and leanings. There was a continuous coverage or daily debates when some one Pehlu Khan was allegedly attacked by self-styled Gau Rakshaks, but on the other hand, the same media forgets to cover the news of the brutal murders of Gau Rakshaks, policemen or common farmers at the hands of the cattle smugglers. Take the example of the much debated and controversial “Dadri Beef Murder”. There were many progress and updates, which the media houses never told us about since it went against their political agenda. 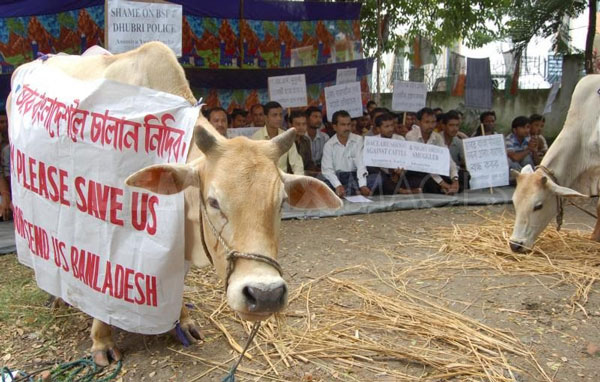 The media, secular politicians and the liberal camp are vocal about the so-called beating and lynching by the cow-vigilantes, while they go conveniently silent on the various murders of the gau rakshaks, policemen, farmers, etc. at the hands of the cow smugglers. We could hear the media crying about the murder of some Pehlu Khan in Rajasthan, but we find the same media ignorant about the following cases:-

Jun 2013: A 27-year old constable was killed and six policemen were injured when the police jeep tried to stop cow smugglers’ truck that was loaded with cattle and cows. The incident took place in Aurai area of Sant Ravi Das Nagar (Bhadohi) district.

Feb 2014: Cow smugglers shot Chokhey Lal dead and battered another village resident to death when they tried to stop cattle-traffickers. The incident happened in Ahmadabad village of Nawabgunj tehshil.

Sep 2015: Cow smugglers shot and killed sub-inspector Manoj Mishra when he and a constable tried to stop the smugglers from taking away 50-60 cows. The incident took place in Faridabad.

Oct 2015: Prashant Poojary was stabbed and killed at Mangalore by 6 members of Popular Front of India for protesting against an illegal slaughter-house near Moodbidri Temple

Feb 2016: Dalit Hindu VHP Leader Arun Kumar Mahaur was shot dead by 5 by local Muslim residents in Mandola. These men were fed up of his activities against an illegal slaughterhouse in Agra. Why was the media silent? Because the victim was a Hindu Dalit from VHP and the culprits were Muslims?

Jun 2016: Two Muslim youngsters killed 55-year old Data Ram, a chowkidar at Chak Lateef of Imamgarh village because he tipped off the Police about cow slaughters and incidents of cruelty towards the animals. Ram, who was returning home with two stray cows that were handed to him by the police who recovered them in an open field and suspected they were meant for slaughtering, was killed on suspicion of being a police informer.

Jun 2016: Two unidentified cattle-smugglers shot and killed a 16-year old minor girl called Nirdesh Singh in the Ahmadabad village of Etah district, when she caught them stealing her cattle from her backyard barn.

Jun 2016: A 35-years old Dalit man called Dinesh Kumar was killed by cattle-smugglers when they crushed him under their cattle-laden truck because he tried to stop them from stealing his cow at 1 AM. The incident happened in Firozabad district. Why didn’t the media raise its voice for a Dalit?

Aug 2016: 56-year old Head Constable Triloki Tiwari was killed by cow smugglers when they drove a vehicle over him carrying cattle and cows. The incident happened at Sarai Pokhta outpost in Jaunpur.

August 2016: 70 Cows died during illegal smuggling in Amravati due to poor treatment, suffocation and lack of food and water.

Nov 2016: 20-year old Yasoda, the resident of Asrauli village of Dehat Kotwali area of Etah, was murdered by unidentified cattle-smugglers who shot her when she caught them red-handed trying to steal her buffaloes from the barn. The incident took place around 3 AM.

June 2017: 45-years old Charan Singh of Kotrekapura village under Nibohra police station was shot twice by a group of cow smugglers when he nabbed one of them while they were trying to steal his cattle.

To end the discussing with, let me share some information. Schemes like “White Revolution”, “National Dairy Plan”, “Operation Flood”, etc. were undertaken by the Indian government to increase the milk production in India. The National Dairy Development Board (NDDB) started the “Operation Flood” in 1970, which is the world’s largest dairy development programme. That way, we can easily understand the enormous amount of  money invested in the scheme. India was once a milk-deficient nation. By 1998, India became the largest milk-producer in the world by pushing USA back . Cow slaughter would affect this huge, ambitious program. But gradually lost our edge over a period of time. What happened between 1998 and 2014 that we lost our edge? One reason was cow and buffalo slaughter that increased during these periods. Due to the principled stand of the current Indian government and the activities of the gau rakshaks, cow slaughter has reduced to great extent. As a result, India’s cow milk production has increased tremendously during 2014–2016. In 2017, India became the largest milk-producer in the world.

PM Modi absolutely demolished His Critics Today, The Facts were Spot On and the Delivery Lethal