I read the reports that called Demonetisation a Monumental Failure, Then I looked Deeper. Now I Know the Truth is Very Different

by Asutosh Mohanty
in Economy
0

It has been nine months since the evening of 8 November 2016 when Prime Minister Narendra Modi announced a demonetisation drive, recalling all high-denomination currency notes. Projected and hailed as a bold move by the government aimed at rooting out tax offenders and striking hard at black money; the drive provided enough fodder for economists and arm chair experts on both sides of the divide to indulge in a passionate debate and unrelenting speculation analyzing the effectiveness of the drive to meet its stated objectives and its impact on the economy

The major objectives of demonetisation drive as stated by PM Modi was to gradually bring down the quantum of cash operating in the system, integrating the informal economy with the formal one which would boost the growth of India, reducing the quantum of black money so as to end corruption, eliminate terrorism and naxalism

From where I see most of the objectives have been met; and for those who remain skeptical, let’s take a walk through the numbers published by RBI in real sense i.e. looking at the numbers in a holistic manner and not in silos

Has the Quantum of Cash Operating in the system reduced in reality?

At the time of demonetisation, currency worth ₹ 17.77 Lakh crores was in circulation in the economy. Out of this, ₹ 15.44 lakh crores was in high denomination notes, which were phased out. ₹ 2.33 lakh crores remained in small denomination notes with a value of ₹ 100 or less. The value of banknotes in circulation declined by 20.2% over the year to ₹13,102 billion as at end-March 2017. But there’s a twist to this. Let’s analyze two scenarios

Thanks to DeMonetisation the Indian economy is running with ₹ 5 lakh crores less cash than the amount that would have been present in the economy had demonetisation not happened which is a blessing in disguise. The direct implication is that the amount of cash stashed away by citizens has come down. This is advantageous to the growth of economy since just hoarding of cash delivers no value to the country’s growth (http://indiatoday.intoday.in/story/narendra-modidemonetisation-income-tax-revenue-digital-economy/1/962380.html)

Another aspect which needs to be analyzed is the status of HDN (High Denomination Notes) i.e. 500 & above; pre and post DeMonetisation

“HDNs with the public more than doubled from 34% in 2004 to 79% in 2010. The average annual rise in HDNs was 51% between 2004 and 2010 and the annual rise was 63% by 2013-14. The Reserve Bank of India noted that two-thirds of the ₹1,000 notes and one-third of the ₹500 notes — that is over ₹ 6 lakh crore now — never returned to banks after they were issued (Nov 2016). The unmonitored HDNs roaming outside banks began driving up the gold and land prices by black cash and the stock prices through Participatory Notes (PNs) — which are largely hawala transfers out of India — that came back pretending as foreign investment in stocks

HDNs outside banks took refuge in stocks, gold and land, produced capital gains-led growth and consumption. Had the HDNs circulated through the banking system, it would have multiplied through the fractional reserve model, reduced the inflation and interest, and funded the small-and-medium enterprises starved of organised funding

If the status quo of unmonitored HDNs were to last for another five-six years, the size of HDNs would have become so huge that no government may have been able to act against it — inevitably inviting a huge crisis, both internal and external” S Gurumurthy

The share of ₹500 and above banknotes, which had together accounted for 86.4% of the total value of banknotes in circulation at end-March 2016, stood at 73.4% at end-March 2017. So now I hope you guys can relate why checking the growth of HDN notes and bringing it back to Banking Channels was not only important but also necessary 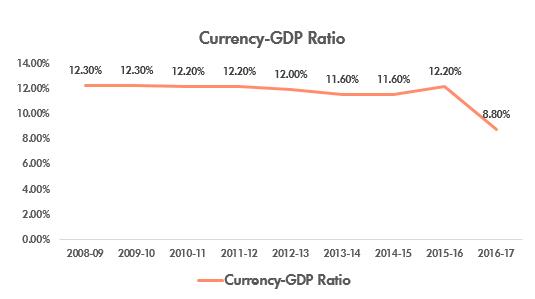 At end-March 2017, CIC (Currency in circulation) amounted to 8.8% of GDP, down from 12.2% in the previous year. At this level, India’s currency to GDP ratiocompares well with a host of advanced andemerging market economies (such as Germany,France, Italy, Thailand and Malaysia)

Reduction in CIC, HDN notes and Currency: GDP ratio is a great start to tackle the menace of Black Money

Had DeMonetisation helped in integrating the informal economy with the formal one and is cashless (less cash) society becoming a reality???(RBI Annual Reports)

Is not earning dividend from RBI b’coz (as almost 99% notes returned to the system) a failure of DeMonetisation???

Now one of the aspects where people are debating is w.r.t. to dividend which Govt. would have earned through this exercise. Many of the financial experts from leading business dailies like Economic Times, Business Line, Indian Express were explaining how if after the exercise if certain amount of notes don’t return back, they will be no more RBI’s liabilities and could then be passed on as dividend to the Government of India. These kinds of reports (including certain internal assessment of Govt.) had raised expectations with common masses

But RBI in its notification on 7th Dec, 2016 had clearly mentioned that it will not treat unreturned old notes as dividend for Govt. So the debate should have stopped there it self but MSM always wants some TRP some buzz (http://www.hindustantimes.com/business-news/rbi-says-it-will-not-treat-unreturned-old-notes-as-dividend-for-govt/story-RjMHzQ3xKTpub1BRrNcVfL.html )

Finally DeMonetisation was not a standalone step by NaMo to curtail Black Money and Corruption. Numerous steps have been taken starting from setting up SIT in the first cabinet meeting to “The Black Money (Undisclosed Foreign Income and Assets) and Imposition of Tax Act, 2015”, signing up treaties with tax heavens, raising the issue in G20 Meet, amending the Prevention of Money-laundering Act, 2002, Political Funding to Benami prohibition law

Would be ending with what renowned economist political and economic analyst, S Gurumurthy said “It was the Financial Pokhran which was Not a tragedy, but the remedy”

Dear Kamal Hassan If You Really Care About Students, Borrow this Idea from Akshay Kumar

Israel was Ignored by India for Far Too Long, PM Modi embraced Israel. Now the Results are here