One year without Noise hour! 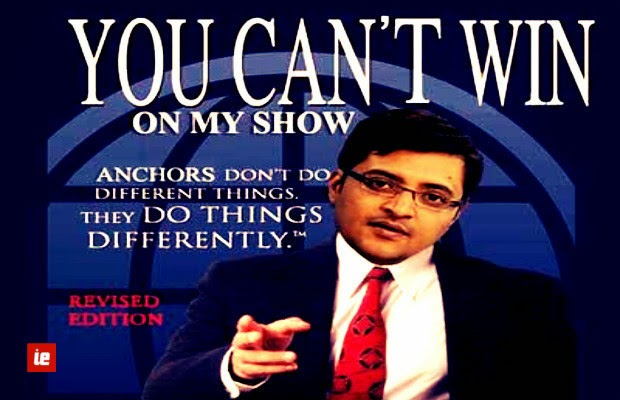 Post dinner time was quarrel time in our family. Our emotions, inflamed by Arnab’s screaming and yelling and the ritual humiliation he heaped on his participants, led us to fight, bicker and quarrel amongst ourselves. We fought on issues such as who made noise while eating (which obviously came in the way of listening to Arnab’s interruptions on the panelists’ views on the burning topic) and we amplified such issues to the limit where they seemed the most important. We genuinely felt that these issues were holding us back and that if the Salt sprinkler was in its place, we would be a better set of people. We would yell, scream, hurl abuse and do everything short of fist fights. At times, we would refuse to speak to each other till the next day’s Noise hour re-inflamed our emotions. Our Blood pressures zoomed, we had cholesterol and it seemed we were on the edge of getting mental disorders. One family member of mine once wept with joy on seeing the Pakistani representatives being thoroughly humiliated on the show.

It was after this incident that we visited a Psychologist. We spoke of the ecstasy that we felt when we saw Arnab insult the panelists. We spoke of how Kejriwal’s views were making sense to us, how RaGa was the best thing to happen to India, how Modi was tearing India apart. We spoke of how there was only evil and nothing good in this world. Lastly, we spoke of a voice inside our heads that spoke like Arnab and made us behave strangely, even with the people we liked. And then, one year ago, me and my family took a momentous decision. Noise hour had to be dropped out of our daily dinner schedule. We swore an oath to deny Arnab Goswami, entry into our dining room every night. With all humility, we told him, that while the Nation might be interested in knowing, we were not. And so began the transformation that has changed us, physically, mentally and emotionally.

We are now happier. We fight less. The darkness in front our eyes has vanished. We see the daylight and can feel it too. The nagging voice inside our head that was loud and yet seldom made sense has gone away. We eat dinner like civilized people. We talk about things that matter, we discuss and arrive at a mutually acceptable solution or we honorably disagree. We don’t fight it out. We behave less like our neanderthal ancestors and more like free thinking people that we are meant to be.

I say to all those who doubt me. Try it. Try denying Noise hour the right to control your dinner time. Try saying NO to Arnab. It changed our lives. May be it will change yours too, for the better certainly!

Vyapam Scam : Untangling the web of truth so far