‘Champions’ of Free Market Economy get jackhammered by India at SCO

When a country has lots on the economic platter, it can propagate any theory and claim that the particular theory is the reason behind its success. But the test of true allegiance to that theory is only when the back is against the wall. This is where the proponents of the free market economy failed and that is why India is jackhammering them.

Oil trade is being done by private companies

The Modi government has made it clear that, unlike western governments, it does not interfere in the day-to-day operations of private companies. Vinay Kwatra, our Foreign Secretary, gave this reality check to the media at a media briefing during the Shanghai Cooperation Organisation (SCO) meet. Kwatra explicitly said that the Russian oil available in India is there only because private companies are taking advantage of the cheaper price of oil being sold by Russian Companies.

Kwatra also remarked that privileges which G7 countries have accorded to themselves are not available to India. Quote, “India is not a member of the G7. Deeper discounts, market pricing.. look, we have said this several times that when the Indian entities go out and try to respond to India’s needs of the energy security and procure oil, they essentially procure it from the market.” Stating again that the government is not involved in oil purchases, Kwatra added, “These are not government-to-government purchases that we do.”

Indian companies did not accede to West’s demands

Western countries have been furious over Indians refusing their demand of not buying Russian oil. They have been trying their best to pressurise India into accepting their self-defeating demands. Various methods including overt and covert aggression were tried, but Indian companies just did not give a dime about their demands. On its part, the Indian government also did not pressurise any company against buying Russian oil.

On diplomatic forums, Indian Foreign Minister S. Jaishankar also took on journalists criticising the purchase of cheap oil. Resultantly, India’s import of Russian oil has increased by 50-fold in the aftermath of the Ukraine-Russia crisis. Russia’s position as the top oil supplier to India keeps hovering between number 1 and number 3.

Hypocrisy, thy name is West

Yes, even after their sincere attempts to minimise their dependence on Russia, western countries could not shelve themselves from criticism of hypocrisy. In fact, they are so cornered that whether they buy Russian fuel or not, hypocrisy is bound to hit them. Let me explain by giving a brief snapshot of how modern-day western economies have been shaped by economic theories.

The plinth of modern-day western economies is rooted in the concept of a free market economy. The concept first came into effect when the industrial revolution started to take shape in European countries during the 17th and 18th centuries. Within no time, the perception of land changed from crop-producing stuff to something on which factories could be established.

Now the problem with the availability of land was that its supply is non-elastic. It means that land does not follow the direct correlation link between supply and demand. So, while for resource A, an increase in supply by two percent means a similar change in price; for land, an increase in supply of land by two per cent may mean an increase of 25 per cent in the purchasing price. The problem got so exacerbated that it became easier to conquer land rather than buying it. This is where European powers went bonkers over their expansionist policy in Africa and Asia.

Role of people and government in free market economy

The countries and their companies, lots of which were national, were assisted by classical economic philosophies of the era. Adam Smith, known as the father of economics, propagated the idea of trade without borders. It meant that only demand and supply should be the two forces present in the market. According to him, the free market should not prioritise one company or another. He also advocated for the elimination of artificial scarcities and existing monopolies. In other words, Smith advocated for a market free of government control. For Smith and his ilk such as David Ricardo, Thomas Malthus, Anne Robert Jacques Turgot, John Stuart Mill, Jean-Baptiste Say, and Eugen Böhm von Bawerk among others, governments are a necessary evil that is required in order to expand wealth creation in a harmonious manner.

People? Well, people are only supposed to be buyers or sellers, and nothing else. It is nothing less than free market fundamentalism and later came to be known as laissez-faire. Prevalence of various classical thinkers contributed to other branches as well. One of them includes voluntary socialism, which is manifested in redistribution policies in Nordic countries and policies like Obamacare among others. But, by and large, laissez-faire and voluntary socialism are examples of free markets.

Expansion of the philosophy in post-colonial era

Throughout the last 3 centuries, western countries used this philosophy for economic justification of their colonial rule. If you observe closely, there is an inherent contradiction in it. They were using the philosophy of stateless trade to occupy newer states. This is a marvellous feat, something which could be achieved only with the connivance of intellectuals.

Even after colonialism disappeared these countries did not stop pushing for a free market. Resultantly, countries all across the world either adopted it thinking the philosophy to be valid, or they were forced to adopt it after an economic downturn like what happened with India in 1991. It is worthwhile to mention that a lot of countries including India did actually benefit from freeing their companies off state controls and saw rapid improvement in GDP growth rate as well as human development indices.

However, slowly these countries have started to realise that the concept of absolute free market economy gives way to free market anarchy. As the Internet expanded its horizon, thanks to the opening of economies, people sitting in the developing world realised that the proponents of free market economies have themselves tied their private companies to government controls.

How did they realise it? Well, they learned it from the best in the business, the USA. Currently, the United States of America has imposed various kinds of sanctions on 60 countries. Yes, some of these sanctions include the American government not engaging with other foreign governments. But a large part of these sanction regimes on other countries includes an indirect sanction on the companies based in the United States itself.

Interference during the crisis

No time other than the Ukraine-Russia crisis made it explicitly clear. Despite looking at benefits from lower prices of Russian oil, American oil companies can’t trade with them, because their government is not all in favour of a free market economy.

Before sanctions were imposed, MARATHON PETROLEUM COMPANY LLC, headquartered in the state of Ohio was the number one importer of Russian oil. In 2021, it bought 13.9 million barrels of Russian Ura crude. With 13.1 million barrels, VALERO MARKETING & SUPPLY CO came close second. Monroe Energy, PBF Energy and a whole lot of other companies also used to buy Russian oil in the pre conflict era. 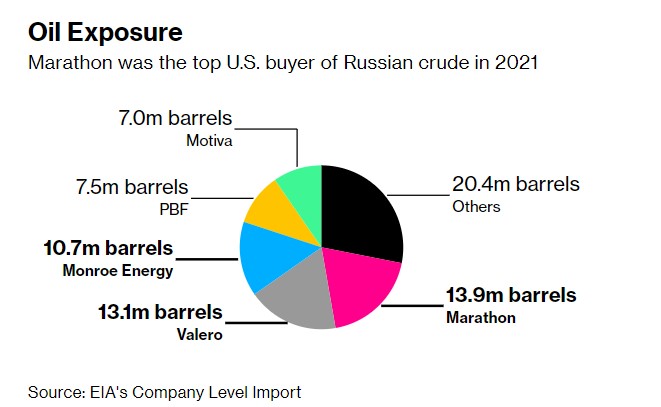 What happened to the trade prospects of all these companies after Americans imposed sanctions on Russian oil? Well, their private trade with Russian oil companies had to be sacrificed because the Biden administration wanted it. Yes, the American government intervened in their day-to-day operations, negatively invoking their profiteering motive. When push came to shove the advocacy of free market died an ignorant death at the hands of American rulers.

Opportunism is the guiding principle of west

Ofcourse they will tell you that they did it for moral principles and what not. But, even that proves the point that their propagation of the free market is subject to caveats. The caveat is that other countries should adopt the free market in order to give some space for western companies to expand their footprints.

Observers of the west are no longer surprised by this. Other than opportunism, they do not stand for any principle, which is of course not a principle at all. Free market principle is just another casualty of it. Ironically, it’s India which is defamed by the west for protectionism which gives more freedom to its companies.

HAL excels at manufacturing, but it needs to up the ante in marketing