The below-average business of Samrat Prithviraj has a strong message

by Tanya Trivedi
in Cinema
0

Bollywood has seemingly forgotten the art of making meaningful and good movies. The awakening of Hindus towards their cultural beliefs and religion was supposed to make the Box-office earn huge profits, but it has become a huge disappointment. While the reviews are mixed and are dubbing it a below-average cinema at best, the box-office collections say it all. And I must say, for a movie like Samrat Prithviraj which should have broken all the records, the box office numbers, to be perfectly honest, are kind of catastrophic.

The period drama was expected to make a benchmark at the box office. However, Samrat Prithviraj is witnessing a declining run at the theatres. As per the reports, after a low-key opening with just Rs 10.70 crore, the film has managed to earn just Rs 48 crore till now. 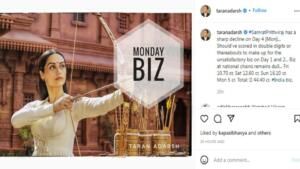 Such a sorry performance at the box office makes us question what exactly went wrong. So let’s dive right into the Samrat Prithviraj movie and investigate what reasons led to such a dismal show at the box office.

You see, Prithviraj Chauhan was a warrior and had a certain kind of persona and physique as well. Thus, it was required for the filmmakers to cast a young actor with a physique and personality that can perfectly fit the character. Instead of Akshay Kumar, the casting director could have done a better job to find a better fit.

Read more: 5 Actors who would have looked better as Prithviraj Chauhan than Akshay Kumar

Akshay is surely a fine actor. But when it comes to period films, it requires extra effort before casting any actor.

While a blindfolded Sanjay Dutt as the warrior kaka doesn’t look convincing, Manushi Chillar’s character Sanyogita appears as the dreariest princess we’ve ever seen in a historical drama.

Sarhad, gustaakhi maaf, shukriya, ishq – these are just some of the words that 12th century ruler Prithviraj played by Akshay Kumar and his cohort use at the drop of a hat in the movie.

The nauseating ‘urduisation’ is one of the reasons that the movie doesn’t look authentic at all. Moreover, several facts have been distorted in the movie.

From the surrender of Prithiviraj to his death, the facts have been conveniently manipulated. Dr. Chandraprakash Dwivedi, before the release of the film, had claimed that he wanted to show the real Indian history and wanted to project the true valour of Emperor Prithviraj. Well, sorry but you have been proven to be unsuccessful in doing so.

There are multiple such scenes and facts that clearly depict how secularism has been added to the film. Be it the marble work shown in the movie to Mughal architecture, almost every single aspect has been falsely narrated.

You must have also heard about “Hari Har”- a central track of the Samrat Prithviraj movie. The song’s lyrics are strange. One of the lines in the song states, “Aisa ek prithviraj jaise Lanka mein dashanan.” Now, the comparison with ‘Lanka mein Dashanan’, that is, Ravana is outlandish and we don’t even understand how it makes any sense. And this is also one of the reasons why Prithviraj Chauhan failed to attract cinemagoers. I mean, who would want their hero that Prithviraj is, to be compared with a demon like Ravana?

The unnecessary amalgamation of secularism, urduisation, and distorted facts have led the Indian audience to refrain from going to cinema halls and spent bucks for the movie. Moreover, the miscasting of Akshay Kumar, Manushi Chillar and Sanjay Dutt is also leaving people disappointed. However, the disappointment is justified as the cinemagoers have been waiting to see their Hindu Samrat on the big screen only to see the legends of the king and other interesting facts about him.

But what they have been served is nothing but a movie with distorted facts and poor performances. The poor box-office collection is the evidence that Indian cinemagoers have rejected the movie and they won’t tolerate any manipulation of the facts especially when it comes to their pride.