Pulitzer awards for photographs is a distasteful celebration of sadism

Pain sells. Agony sells. Sadism sells. In journalism only the negative news sells. And the Pulitzer Prize for 2022 once again ascertains the said claim. Reportedly, on Monday (April 9), deceased Reuters photojournalist Danish Siddiqui, alongside Adnan Abidi, Sanna Irshad Mattoo, and Amit Dave was awarded the Pulitzer Prize for feature photography for sharing morbid, macabre and insensitive pictures of India’s funeral pyres during the devastating second wave of the coronavirus pandemic.

While the world went through a similar experience, it was India’s crematoriums and hospitals that were preyed upon like vultures by the aforementioned brave photojournalists. They clicked photos using high-tech drones having high-resolution cameras, positioned perpendicularly to the crematoriums in the air as the loved ones of the bereaved squirmed in pain, demanding a tiny morsel of privacy.

In a tweet on April 22 last year, the Reuters photojournalist wrote, “As India posted world record of COVID cases funeral pyres of people, who died due to the coronavirus disease were pictured at a crematorium ground in New Delhi, April 22, 2021.”

As India posted world record of COVID cases funeral pyres of people, who died due to the coronavirus disease were pictured at a crematorium ground in New Delhi, April 22, 2021. @Reuters #CovidIndia pic.twitter.com/bm5Qx5SEOm

Interestingly, publications like Reuters or NYT did not have the gumption to publish pictures of funerals taking place in America when the virus was ravaging their country or continues to do so even today. Because the privacy of Americans, it seems, is more important to foreign publications than the privacy of Indians. As a matter of fact, foreign publications and media houses during the peak of the second wave had grown a rather voracious fantasy for Indian crematoriums.

Danish took photographs in a democratic country like India where the government gives individuals the right to indulge in their sadism. However, the same did not happen with Danish when he went to Afghanistan a few months later to click the Taliban in action. The terrorist outfit mercilessly killed Danish; rolled his body with heavy machinery and mutilated it when it got to know that a photojournalist was trying to document them.

While Danish and Reuters paraded the funeral pyre photograph by using it as the stock photograph to disparage India’s attempt to flatten the curve, neither Reuters nor Danish’s family allowed his photographs to be distributed when killed; showing the hypocrisy. It may sound tribalistic but perhaps the world also needed to know the perils of working in Taliban-ruled Afghanistan. And what better way to convey the message than the image of Danish.

A simple way to win a Pulitzer Prize

Pulitzers is regarded as the Oscar for journalists and those winning the award tend to receive overnight fame. However, the method to winning a Pulitzer award, especially in the feature photography category is rather simple.

All the photographer needs to do is be at the right place at the right time and click a gory photograph. A photo that shakes the primal sense of a Homosapien and makes him/her shrivel in fear. After all, more than pain or agony, it is the shock that has a lingering effect on a man’s psyche.

Read More: This picture would’ve won a Pulitzer award if it was the other way round

A look at Pulitzer Prize-winning photos

A look at Pultizer’s award-winning photos over the years suggests that the academy revels in the misery and agony of the individuals. It is as if the jury derives some kind of fiendish pleasure from watching the life being snuffed out of the individuals in the said frames.

In 1994, Kevin Carter won the Pulitzer Prize for the disturbing photograph of a Sudanese child being stalked by a vulture. The child was frail as a skeleton and looked severely malnourished.

The child’s parents were away gathering food rations from the UN feeding centre. Left alone, the little child sank to the ground, not able to stay upright as a big vulture swooped in and sat nearby the child.

However, instead of helping the child, Carter did not disturb the bird. He waited for at least twenty minutes until the vulture was close enough. Crawling slowly towards the child, Carter positioned himself for the best possible angle, clicked the photograph and only then chased the vulture away. 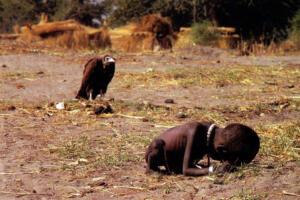 Carter had finally captured a photograph that would bring him the glory. As predicted, he won the Pulitzer Prize for the photograph because shock and horror sell. However, soon criticism started flowing towards Carter and New York Times for publishing such an insensitive photo.

The St. Petersburg Times in Florida criticizing Carter at the time wrote: “The man adjusting his lens to take just the right frame of her suffering, might just as well be a predator, another vulture on the scene”.

Consequently, on 27 July 1994, Carter committed suicide, unable to cope with the grief and the Pulitzer Prize jury had blood on its hands. If they had rejected the photo, Carter would have never gained popularity and the trend of clicking such photographs would have come to a halt.

In 2020 as well, Pulitzer took a special liking to India’s Kashmir and awarded the photography award to AP journalists who captured a jihadi throwing a stone on the armoured vehicle of the police. The academy whilst awarding the prize remarked, “For striking images captured during a communications blackout in Kashmir depicting life in the contested territory as India stripped it of its semi-autonomy.

Pulitzer has an incredibly low threshold regarding what constitutes an award-winning photograph. If one can click photos to show the humans in their most naked, visceral and weak moments, you can easily win a Pulitzer. Reach the closest crematorium and fly the drones and click the photos. It is as easy as that.