Bharat Biotech, the first indigenous company to develop a Coronavirus vaccine, is on the target of anti-national elements – especially the media houses which want to further the propaganda against the company and lobby for American pharmaceutical MNCs – for the last one and a half years.

Media houses like The Wire, The Hindu, Deccan Herald, Times Group have continuously peddled propaganda against the company.

Now Bharat Biotech has decided to expose the propaganda of anti-national media houses which have done immense damage to its reputation and have been successful in delaying many of the company’s previous approvals at the national and international level.

The company named and shamed the media houses that peddled fake news against its vaccine.

The company tweeted fact-check against four media houses – Moneycontrol (Network 18 group; Mukesh Ambani must clean up the house filled with anti-nationals), and a few usual suspects like Times of India, Deccan Herald, and The Wire. 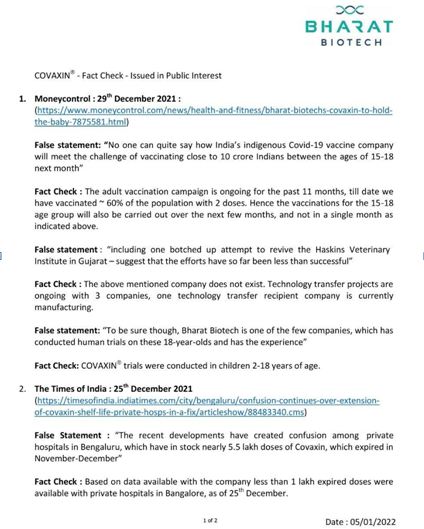 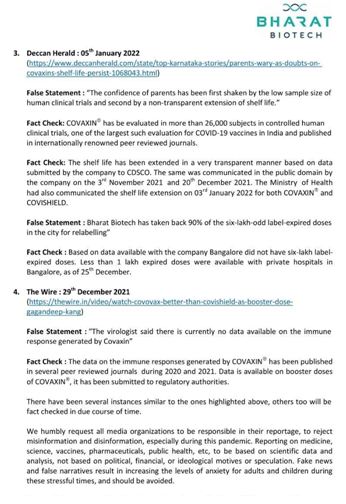 The Wire, in association with Gagandeep Kang – has been spreading fake news against the Indian companies as well as the Indian government from the beginning of the pandemic. A Professor in the Department of Gastrointestinal Sciences at the Christian Medical College, Vellore, has tried to defame Covaxine by arguing that there is no data on the immune response generated by the vaccine. The company said that the immune response of Covaxine has been published in many peer-reviewed journals and submitted to regulatory authorities as well.

Deccan Herald and Times of India raised questions over the shelf life and expiry date of Covaxine despite repeated clarifications from the company. On the other hand, Moneycontrol questioned the capacity of the company to fulfil the demand across the country for teenage vaccination, to which the company put clarifications on Twitter.

For almost one and a half years, the opposition politicians like Akhilesh Yadav, Jairam Ramesh, Shashi Tharoor, in close collaboration with a few anti-national media houses and commentators like Chetan Bhagat are defaming India’s indigenous vaccine and lobbying for the American multinationals – Pfizer and Moderna.

In June last year, Prime Minister Modi in a statement that is worth noting to acknowledge the importance of having an indigenous vaccine. “If you look at the history of vaccinations in India, whether it was a vaccine for smallpox, hepatitis B or polio, you will see that India would have to wait decades for procuring vaccines from abroad. When vaccination programmes ended in other countries, it wouldn’t have even begun in our country,” said Prime Minister Modi.

Millions of people in India either died or became disabled from diseases and viruses like polio, smallpox because we were last to procure the vaccines – at the whims and fancies of foreign pharmaceutical giants and Western governments. During the 1919 Spanish Flu, India suffered more than half of the global casualties because Indian lives were of very little importance to British Empire and the Indian elites.

The same would have happened during the Corona pandemic had India not developed indigenous vaccines and mass production capacity. Today India is not only vaccinating its own citizens but the people in other developing and developed countries.

However, few elites in media houses, opposition parties and political commentators – who can afford foreign vaccines – are trying to discredit India’s capacity and lobbying for American multinationals. These are the same people who would rush to get foreign vaccines and leave the millions of poor people in India to die.

Jawed Habib is again in the news, this time for spitting