by Abhinav Singh
in Geopolitics
0

Pakistan’s misery continues to pile up. After suffering humiliation from its Serbian embassy earlier this month, another embassy, and this time in Argentina, has left the country red-faced. On Wednesday (December 22), the Pakistan embassy in Argentina took to Instagram to post a picture of Prime Minister Imran Khan and other senior officials on its official Instagram account, calling for the substitution of leadership in Islamabad for the revival of the country’s credibility and reliability.

The post was captioned as saying, “The political substitution in Islamabad may lead to the revival of Pakistan’s reliability & credibility. Diplomats can’t be ‘la raison’ for failures.” 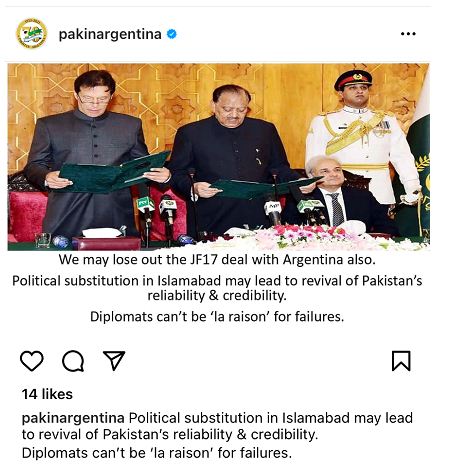 After the post went viral on the internet, it was taken down hurriedly, and the age-old excuse of the account being ‘hacked’ was given. Both the Pakistani embassy in Argentina and Pakistan’s Ministry of Foreign Affairs took to their respective Twitter accounts to clear the air.

The Instagram account of the Embassy of Pakistan in Argentina was hacked a while ago. It has now been recovered.

Please note that all messages posted through this account in last one hour were not from the Embassy of Pakistan in Argentina.

Developed jointly by Pakistan and China, the JF-17 fighter jets have been commissioned into service for the Pakistani Air Force. However, cracks on the engine, poor serviceability, high maintenance, and the deteriorating performance of JF-17 has already made the aircraft a liability for the Pakistan Air Force, whose advanced American jets have been shot down by age-old Russian made jets by India.

Not Pakistan’s first humiliation this month

As reported by TFI, earlier this month, Pakistan’s own diplomats had risen in revolt against the Imran Khan-led rubberstamp government. The official Twitter handle of Pakistan Embassy Serbia posted a public message on the social media platforms asking PM Imran Khan about how long his government expects the government officials to remain silent when they have not been paid for the last three months.

The embassy tweeted, “With inflation breaking all previous records, how long do you expect Imran Khan that we government official(s) will remain silent and keep working for you without been paid for past 3 months and our children been forced out of school due to non-payment of fees. Is this naya (new) Pakistan?”

In the following tweet, the diplomat who put out the embarrassing thread said, “I am sorry, Imran Khan, am not left with another option.” The tweet was accompanied by a parody music video of Imran Khan saying, “aapne ghabrana nahi hai”.

Akin to the Argentina situation, the Pakistan Ministry of Foreign Affairs claimed in a tweet that the Twitter account of its embassy in Serbia had been “hacked”.

Pakistan is going through a torrid time on the economic front. The sky-high inflation, owing to depreciation in the value of the Pakistani rupee and the new tax policies implemented by the government has led to inflation rates crossing the 11.5 per cent mark in November— the highest spike in 20 months.

A massive scam was recently unearthed in Pakistan, and it has severely shattered the bankrupt country’s ability to beg for more bailouts from the International Monetary Fund. The scam was to the tune of PKR 40 billion and came out of Imran Khan’s Covid-relief package.

To further rub in on the misery, Islamabad’s supposed friend China in October asked the Imran Khan administration to pay $38 million. Allegedly, the Communist government has asked for compensation for deceased Chinese workers and engineers, who had died in a bomb blast en route to their job on 14th July 2021.

Moreover, Pakistan’s master Turkey, bleeding out due to a dwindling economy, is now selling drones to India. Pakistan is in dire straits, and if it continues being a terror exporting nation, its situation is highly unlikely to change.

When UAE threw 13 billion dollars into the sea

The game-changing business model of ‘Dark Stores’ in India