Kamal Haasan’s derogatory depiction of Mahadev can never be forgiven

by Abhishek Kumar Singh
in Trending
12

In the past few years, Kamal Haasan has been trying to impose his half-researched pseudo-secular views on gullible masses. However, his on-screen roles have long been depicting Hindus’ Bhagwans in a derogatory way. He did not even spare Mahadev for his anti-Hindu propaganda.

In 2002, a film named Pammal K. Sambandam was released in Tamil Language. It was a comedy film helmed by Moulee. Kamal Haasan played the protagonist in the movie. The film was quite popular and a box-office hit. After witnessing a positive response from the audience, the movie was remade in Hindi and was titled Kambakkht Ishq, a 2009 Bollywood movie starring Akshay Kumar.

Bhagwan Shiv is insulted in the movie

In one of the scenes available on YouTube, Kamal Haasan is directly insulting Bhawan Shiv. The sequence depicts Kamal Haasan’s character trying to shoot a scene in which he is playing the role of Bhagwan Shiv. Along with him, the co-actress is sitting as Mata Parvati. The scene is supposed to depict both Bhagwan and Bhagwati sitting on Kailash Parvat. 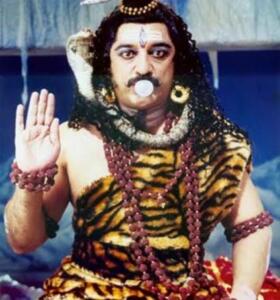 However, the scene turned out to be a complete mockery of both. The sequence shows Kamal Haasan uttering some dialogues while he is dressed up as Mahadev. In one scene, it shows the snake surrounding Kamal Haasan’s snake is making some disturbing movements.

Since he was dressed up as Bhagwan Shiv, it came off as a massive insult to Bhagwan himself. The snake around Bhagwan’s neck, never ever goes against his wishes. The serpentine is actually a symbol of surrender to Bhagwan’s wishes.

Ganga water is shown as turbulent

Similarly, the water of river Ganga flowing through Shiv Ji’s head is wayward and holds no resemblance whatsoever to the real meaning. The reason the Ganga river passes through Shiv Ji’s Jata (hair) is that Jata streamlines the flow of the river and provides a proper direction to it.

Bhagwan Shiv Ji has been shown as volatile

The scene peddles more insult to Hindus’ beloved Bhagwan. Shiv Ji is shown as chewing gums and having uncontrolled movement of heads. In reality, he is a role model for stoicism being promoted in modern times as a Masculine trait.

Kamal Haasan has a history of insulting Hinduism

This is not the first time, Kamal Haasan has insulted Hinduism. As extensively reported by TFI, ever since his political ambitions became crystal clear, he has been trying to follow the secular playbook to garner public support. He has been responsible for promoting falsified agenda of Hindu terrorism in the south Indian state. Similarly, his illogical rants on the Hindi language have invited criticism from all sorts of public personalities.

Read more: A Kamal Haasan Fan’s Take on his Political Ideology and Agenda is something you shouldn’t miss

Kamal Haasan or any politician should realise that the only way someone could gain respect in India is by integrating Mata Laxmi and Mata Saraswati. Just fame and money won’t give them legitimacy. Kamal Haasan’s derogatory depiction of Mahadev is something that can never be forgiven.

Elephanta Caves: How Mahadev’s beautiful Cave Temples are being desecrated