Black Market of ‘Darshans’ at Siddhivinayak Temple gets exposed. What is Uddhav govt doing?

Taking benefit of the devotees looking to pay their obeisance at the temple, the touts and scamsters in and around the famous Siddhivinayak Temple in Mumbai have come up with an elaborate scheme. Darshan of the deities which are supposed to be free has turned into a scam where touts are pouching as much as Rs 300 from each individual.

Reportedly, ever since the Covid-19 pandemic hit the country, to facilitate the movement of devotees in the temple under the prescribed limit, the Siddhivinayak Temple Trust came up with a mobile application that helps an individual book a slot for the darshan. If someone wants to do darshan, prior online booking is mandatory.

A scam running in plain sight

However, a netizen named Amit Thadhani took to Twitter to share his experience of booking through the app and simultaneously exposed the scam that was running in plain sight.

Thadani remarked that to test his theory of the scam, he went to the temple where he was immediately approached by a man near the flower stall. The man appeared to be one of the many touts roaming the outside compounds of the temple. He came up to Thadani and explained that he could get Thadani and the folks with him inside the temple in no time.

Siddhivinayak temple trust has come out with an app for online booking of darshan in Covid times. If you want to visit, prior online booking is mandatory. Of course like all govt controlled temples, there’s a scam going on in online darshan too. Read this thread. 1/n pic.twitter.com/8ZclCqdd4a

Thadani said, “This Sunday, I went to Siddhivinayak temple with some relatives. When we reached there, a man standing outside one of the flower shops approached us and said that darshan was only possible with prior online booking. But he could get us in immediately, for a fee of course”

Rs 300 per head bribe to gain entry into the Temple

However, upon downloading the ‘Shree Siddhivinayak Ganapati Temple’ from the app, the whistleblower could not find a single slot for the darshan as the tout once again extended his offer and also laid down the price for his scheme, which happened to be Rs 300 per head.

He said, “Not believing him, I downloaded the app and logged in after creating my new ID. But it showed all slots full. The man said he could get all ten of us in through the app (maximum 2 per phone are allowed) but he would charge 300 per person. Here’s where it gets interesting”

Looking to get to the end of the charade, Thadani and the other four from the group gave them their mobile phones. The scammer, along with his sidekick, swung into action, and within minutes, in a rather smooth manner, the booking was confirmed for all of them.

Thadani observed, “Five of us were asked to hand our respective mobiles. The man and his sidekick quickly got into action and within seconds, I saw this on my phone. Darshan confirmed. All five devices got the confirmation within a couple of minutes and we all got the darshan ticket.”

The touts created fake IDs for the bookings

However, the alert netizen got a brief idea of how the entire scam was pulled. He kept the login of the person on his device to expose the modus operandi and said that the touts booked the slots en masse with fake accounts every single day.

He added screenshots of the fake account in the thread and said, “This is the fake account through which the slot was blocked (obviously the person’s name isn’t really Siddhivinayak). So remember folks, if you’re not getting a slot for darshan at Siddhivinayak, chances are the local touts outside the temple have already blocked all of them.”

Thadani was not the only one who had faced such a problem in booking the slots. A rough look at the apps review section on Google Play is enough to understand that the scam has been running, ever since the app was launched. 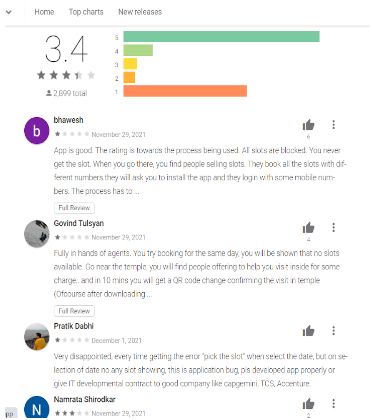 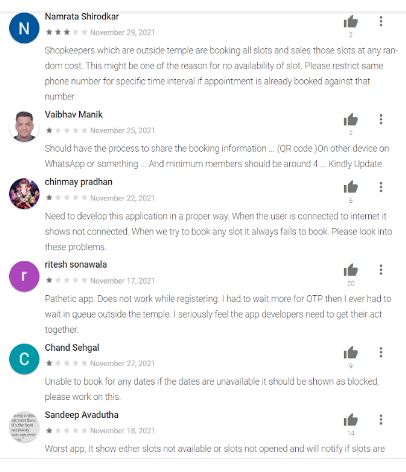 It is imperative to note that a temple-like Siddhivinayak Mandir, which is the centre of the devotion of millions of Hindus, is under the control of the Maha Vikas Aghadi (MVA) government in Maharashtra. Earlier this year, Shiv Sena had appointed Marathi film actor Adesh Bhandekar as chairman of Siddhivinayak Trust.

It doesn’t make sense to appoint an actor to serve as the President of the Temple’s trust when there must be several more qualified priests in the temple, more than capable of running the affairs of the mandir.

Akin to several temples across the country which are in the clutches of the governments, Siddhivinayak has also become a cash cow for the government, which it isn’t looking to let go any time soon.

The BJP Government in Uttarakhand recently took an inclusive decision by annulling the Char Dham Devasthanam Board Act, which had brought over 50 temples, including Char Dham shrines of Gangotri, Yamunotri, Badrinath, and Kedarnath, under the state’s control.

One can hope that the aforementioned scam can rally up the Hindus who must demand the temple to be freed from the hands of the government.

‘We are all unemployable,’ Swara Bhasker gets emotional in front of Mamata Banerjee